How has China’s National Security Law impacted Hong Kong business a year on?

One year on from the National Security Law, how well is China balancing its desire to incorporate Hong Kong fully into the Greater Bay Area (GBA) with allowing the city to remain the financial capital of Asia? Writes Joe Cash

The Hong Kong National Security Law (NSL) provoked considerable conversation when introduced by China’s National People’s Congress (NPC) in June 2020. Spooked by its seemingly sudden introduction, foreign business leaders took to the press, predicting that the new law could cause multinational companies to “vote with their feet” and leave the market. Portrayed by Chinese state media and Party-affiliated or Party-leaning analysts and think tanks as an essential piece of legislation that has “restored freedom from fear… following the social unrest in 2019,” how has international business responded to the NSL, one year later?

The NSL was brought into law by decree of the Standing Committee of the NPC, bypassing the Hong Kong Legislative Council (LegCo) as a Mainland Chinese law applicable in Hong Kong under Annex III of the Hong Kong Basic Law (the de facto constitution of Hong Kong that was agreed to implement the Sino-British Joint Declaration in 1997).

That Hong Kong would introduce its own security law was one of the articles of the Basic Law. However, the LegCo never enforced Article 23 due to its unpopularity with the electorate. Fast forward to 2019, however, and the Chinese Government appeared to call time on the LegCo’s deliberations and took matters into its own hands.

Running to 66 articles, the NSL criminalises activities deemed to be associated with secession, succession, terrorism, and collusion; the maximum sentence for these crimes is life in prison. Applying to Hong Kong citizens, residents, non-permanent residents, and companies alike, businesses were quick to ask questions relating to how it would affect the business environment, considering that companies could face fines if convicted and foreign NGOs would be subject to stricter monitoring.

Read Also
In depth: China's arbitration laws – and how they're getting better

The NSL has changed how multinationals consider Hong Kong. That said, few have decided to air these concerns publicly, with the majority taking the approach of ensuring quietly that they are compliant rather than endorsing or criticising the NSL. While Hong Kong’s position has not changed on most ‘Ease of Doing Businesses’ indices, multinational companies acknowledge that it has affected the character of the market in a significant way – particularly with regard to employee safeguarding and the handling of data.

The criticism that the NSL makes the SAR just like any other Chinese city finds interesting application when reflecting on how multinational companies consider the market. After all, many multinationals maintain a presence in Hong Kong for the express purpose of doing business in Mainland China and have a long history of being compliant with similar legislation there – ergo, why should they then not accept the situation in Hong Kong? But that is a question outside the scope of this update.

Beyond the personnel and security ramifications of the NSL, three particularly interesting issues affecting business have emerged since its introduction.

Two weeks after the NSL’s introduction, the Trump Administration announced that it was ending preferential economic treatment for Hong Kong through executive order. Speaking in the Rose Garden at the White House after the order’s signing, President Trump described the situation as, “No special privileges [for Hong Kong], no special economic treatment, and no export of sensitive technologies.”

The US and Hong Kong had maintained a special trading status under two agreements signed in the 1980s, that allowed Hong Kong to enjoy lower trade tariffs and a separate customs framework in its dealing with the US. But, it is worth noting that the executive order has no bearing on Hong Kong’s international position as a separate customs territory, because that is recognised by the World Trade Organization (WTO).

However, ending Hong Kong’s ‘Special Status’ under US law has potentially affected the city’s attractiveness as a re-export hub, which was one of the reasons it was so appealing to multinationals in the first place. This legislation primarily impacts companies that incorporate the US into their supply chains, which many UK multinationals do, including automobile manufacturers, semi-conductor & software design companies, and providers of medical devices. In the past, companies could use Hong Kong as a re-export hub, meaning that goods that go through Hong Kong to the US but have come from elsewhere – like China for instance – could avoid the tariffs that the Trump Administration placed on China.

Now that Hong Kong’s ‘Special Status’ is gone, the city is arguably no more attractive than any other port in China when considering supply chain management. The impact on Hong Kong has been substantial. Re-exports to the US previously constituted 7.9% of Hong Kong trade, and in 2019 were worth some $38 billion (£27.3 billion).

But by 2020, that number had fallen to 3.2% or $16 billion (£11.5 billion). To put that figure into context, the value of reexports from Hong Kong to other key markets, including Taiwan, Malaysia, and South Korea, increased by 18%, 2.8% and 9.1%, respectively over 2020, while re-exports to the Mainland (which introduced onerous quarantine policies on mariners, impacting exporters) decreased by 4.7%, still far short of the 58% decrease that US re-exports suffered.

Intensifying competition between Hong Kong and Singapore to attract multinationals

Since the introduction of the NSL, analysts have had their sights set on Singapore, anticipating an exodus of multinationals looking to sell across the Asia-Pacific and into China, but from somewhere deemed safer in terms of national security issues.

When surveyed in August 2020, 23% of US companies with offices in Hong Kong indicated that they were thinking of leaving the territory, according to the American Chamber of Commerce. Meanwhile, 13% had reportedly already taken steps to move out of the city. Furthermore, nine out of 10 respondents listed Singapore as their preferred destination for their relocation.

That said, the majority of companies appear to be staying put for now. After all, the structural reasons for companies using Hong Kong as an Asia-Pacific hub remain in place – low tax rates, good geographic location, and convertibility of currency, for example. Furthermore, the Chinese government’s interest in a Singapore model is well known and, one can assume, businesses anticipate that such a framework will quickly find application in Hong Kong. Singapore scores poorly on measures like freedom of the press and government accountability, but ranks in the top 5% on Rule of Law, according to the World Bank. 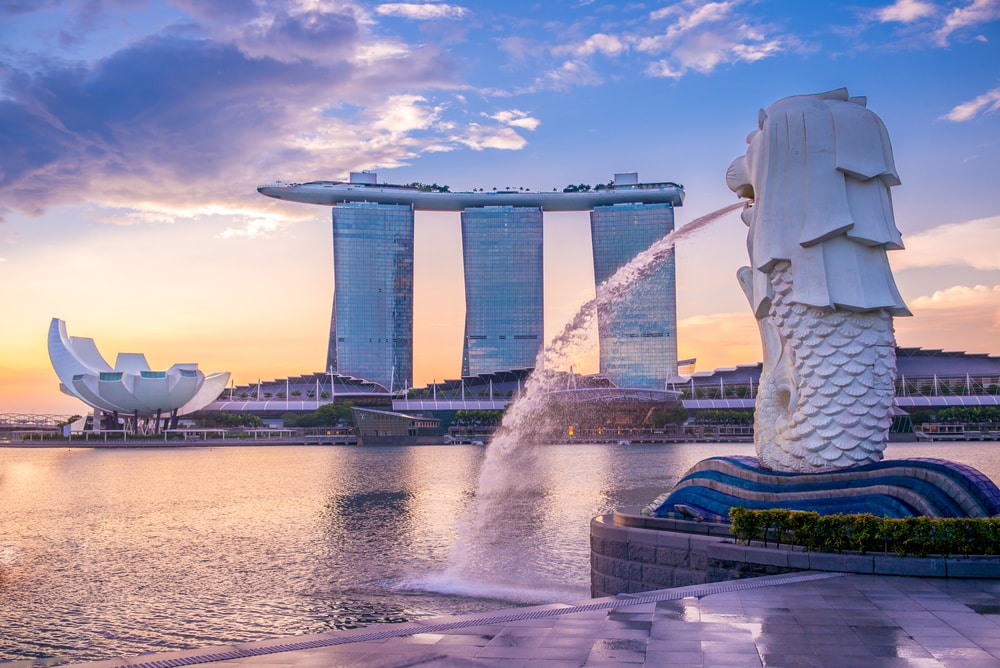 However, there is a risk Hong Kong’s ability to be perceived as a leading global centre for Rule of Law is being undermined by the NSL, as a steadily growing number of respected jurists elect to leave their positions on the Hong Kong bench and companies choose to pursue commercial arbitration in Singapore, London or Paris instead; Singapore received 479 new arbitration cases in 2019 to Hong Kong’s 308.

While companies are not announcing a departure, they are quietly buying up office space and apartments in Singapore for their Hong Kong-based staff. Despite travel restrictions and local restrictions on viewing properties, 260 units were sold to foreigners in Singapore in the first nine months of 2020 and 75% of such buyers were from Hong Kong or Mainland China, according to PropNex Realty, Singapore’s largest private real estate company; this is lower than the same period in 2019 (306 units) but nonetheless notable, given the expected impact of the pandemic.

Putting the NSL to one side, businesses and their employees are also reportedly beginning to shift towards Singapore because of the city’s relatively relaxed quarantine policies.

Multinationals that use Hong Kong as a hub to store their Asia-Pacific customer or R&D data are also beginning to re-evaluate their position in the territory. Some worry that enforcement of the NSL could lead to requests from Beijing for user data, making Hong Kong a less attractive place for tech companies resistant to China’s data review policies.

According to Article 43 of the NSL:

“When handling cases of crimes endangering national security, the Hong Kong Special Administrative Region government police department for the preservation of national security may employ the various measures that the extant laws of the Hong Kong Special Administrative Region allow the police and other law enforcement departments to take when investigating serious crimes, and may employ the following measures… (1) search premises, vehicles, boats, aircraft and other relevant places and electronic devices that may contain evidence of an offence… (4) Requiring persons who published information or the related service providers to remove information or provide assistance.”

As a result, the NSL is seen to override Hong Kong’s original legal system, potentially making it a less attractive destination for Asia-Pacific headquarters. If this is the case, it is a significant blow to MNCs, for Hong Kong has developed into the region’s hub for submarine internet cables and satellites because of business’ enthusiasm for the territory’s geographical location, meaning that it will be hard for companies to find similar services elsewhere.

While perhaps no longer suitable for a regional headquarters, companies that transfer data in and out of the Mainland still see an opportunity in the NSL as it pertains to data management: It could expedite the development of the GBA data regime. However, that role could be moving out of Hong Kong too, for Guangdong Province recently announced that it plans to build a common data platform for the GBA and a data trading market in Shenzhen to regulate data travelling between the Mainland, Macau and Hong Kong more thoroughly.

Read Also
How much does the UK need China post Brexit?

The introduction of the NSL has the potential to change the role that Hong Kong is most suited to play in the Asia-Pacific operations of multinational companies. There are now attractive alternative markets (not least, Singapore) within which an Asia-Pacific hub could be established. Whether Hong Kong can retain its status as a gateway into Mainland China will probably depend on the role given to it within the GBA. Decades of interest from multinational companies looking to establish an APAC hub in Hong Kong has resulted in it having the optimal infrastructure from which to direct a large, regional business; the business environment is supportive too – e.g., Hong Kong has a lot to offer companies looking to re-direct goods and services into China through the CEPA Agreement. However, Beijing appears intent on bringing Hong Kong in line with its neighbouring GBA cities and ending its special treatment, meaning that it is not inconceivable that cities such as Guangdong, which has excellent shipping and data management capabilities in its own right, could – in the future – impede on the territory’s status as a gateway to China.

Are these ‘Science Cities’ set to be...