Home ServicesLaw In depth: China’s arbitration laws – and how they’re getting better
Law

In this policy update, Joe Cash explains how UK firms selling into the China market from Hong Kong or the Greater Bay Area can take additional steps to improve the extent to which their business with Mainland China is protected under PRC law

Commercial dispute settlement in China is set to become (slightly) more ‘foreign company-friendly,’ following three important changes that China has made to its commercial arbitration framework. The result of these changes is that foreign firms accessing the China market through Hong Kong or through the Shanghai Lingang Free Trade Zone can take steps to improve the extent to which any interactions with Mainland China are protected under the laws of the People’s Republic of China (hereafter referred to as PRC law or the PRC legal system).

Beijing made these changes to improve the scope of Chinese legal protection for investors exporting capital overseas, but the Ministry of Justice and the Supreme Court’s push to internationalise the country’s commercial arbitration frameworks have resulted in improvements in how foreign firms can interact with China’s commercial arbitration systems, too.

China’s businesses are ‘going out’ and doing business overseas like never before. The value of trade between China and the European Union alone is worth approximately €1 billion each day. More broadly, China is now the second-largest capital-exporting country in the world (behind the United States). As of 2018, over 27,000 Chinese enterprises have invested in 188 countries and established 43,000 Chinese-invested enterprises overseas. In the UK, there are 838 Chinese-owned companies currently trading, according to Grant Thornton’s Tou Ying Tracker – an increase on the 795 companies identified in 2019.

However, as the number of Chinese companies looking to engage with foreign markets increases, so too does the number of commercial disputes involving a Chinese party. As such, since the late 1990s, civil servants involved in China’s judicial affairs have paid close attention to ensuring that adequate legal protections exist under PRC law for Chinese firms as they invest greater amounts of capital overseas and conduct more cross-border business.

What steps has China made?

Over the last few years, China has taken three important steps to improve its capacity in international commercial arbitration.

Firstly, in 2019, it signed up to the Singapore Convention on Mediation (formerly known as the United Nations Convention on International Settlement Agreements Resulting from Mediation). An agreement regarding international recognition of mediated disputes, the Singapore Convention – which came into force in September 2020 – not only provides China (and any of the other 53 signatories currently lacking one) with a specialised law on commercial mediation, it also tidies up other inconsistencies across China’s legal system regarding the role of arbitration in international trade – such as where PRC law requires disputes to be settled judicially rather than through arbitration. This makes the situation far clearer for a foreign company considering pursuing a Chinese party through arbitration – a welcome step towards improving the business environment.

Secondly, the Supreme People’s Court (SPC) of the People’s Republic of China and the Department of Justice of Hong Kong introduced the Arrangement Concerning Mutual Assistance in Court-Ordered Interim Measures in Aid of Arbitral Proceedings by the Courts of the Mainland and of the Hong Kong Special Administrative Region (HKSAR), which came into effect on 1 October 2019. The Arrangement is important for arbitrations concerning Mainland Chinese parties or assets because it makes Hong Kong the first (and, to date, the only) seat of arbitration outside Mainland China where parties can access the PRC court system in pursuit of Interim Measures in aid of offshore arbitration – be they foreign or domestic.

What type of arbitration institutions exist in China, and which disputes can they handle?

As Matthew Erie, a professor at the University of Oxford Centre for Socio-Legal Studies, points out, “Taken together, these developments open the gate to foreign arbitration institutions in China … as such, they provide a foundation for conforming China’s arbitration institutions with international expectations, a helpful step forward for Sino-foreign resolution.”

But what do these developments mean in the context of UK-China commercial disputes, and do they mark a significant improvement to China’s business environment?

What should I know about the PRC Arbitration Law? What does it say about ‘foreign-related arbitration?’

Arbitration has long been an issue for foreign companies in China; procedurally opaque and geared up to support domestic companies, it can be hard to understand from the outside looking in. That can leave some UK companies needing to resolve issues in China feeling that commercial arbitration is not an option for them. But China’s regime is improving.

Firstly, China did not have a specialised law on commercial arbitration on its books until last year, when it adopted the Singapore Convention that introduced a framework setting out general standards addressing mediator qualification and confidentiality. Before that, companies looking to settle cases could either take matters to the courts for judicial proceedings or go through institutional arbitration. The second point to note is that institutional arbitration in China has been covered by PRC Arbitration Law since 1994 (with an amendment in 2007). However, the Arbitration Law focuses on institutional elements of commercial mediation, such as which types of cases can be administered through arbitration and those which require a judicial decision, but it does not outline provisions for issues such as mediator qualification and confidentiality. As a result, it has delivered an arbitration regime that foreign-invested companies have often felt was insufficient.

Unlike most other jurisdictions in Asia, China’s Arbitration Law does not find its basis in the UNCITRAL Model Law on International Commercial Arbitration (1995, as amended 2006). As a result, the Arbitration Law diverges in important respects from international norms, most notably in the way that it established a bifurcated system separating ‘domestic’ and ‘foreign’ related arbitration. This bifurcation affects which type of arbitration institutions can accept which type of dispute and the extent to which an outcome remains legally valid in Mainland China – bad news for British businesses doing business with Chinese partners. 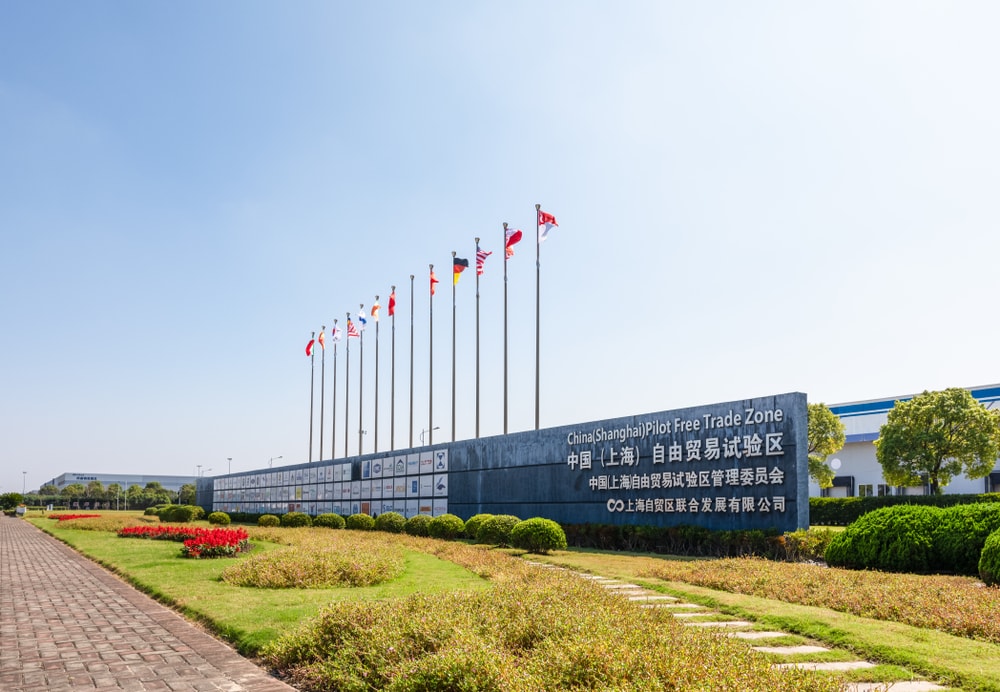 What is the Shanghai Lingang FTZ?

Established in 2013, the Shanghai Lingang FTZ has emerged as an incubatory space for international dispute resolution in China. Since 2015, foreign arbitration institutions have been able to benefit from a range of incentives to set up a representative office in the FTZ to expand the zone’s capacity for handling foreign commercial disputes involving other wholly foreign-owned enterprises (WFOEs).

A game-changer for UK companies with interests in Hong Kong or across the GBA, these measures see foreign firms treated the same as domestic ones when it comes to applying for Interim Measures from PRC courts.

The next breakthrough came in 2016: China’s Supreme People’s Court issued an opinion that – while not an amendment to any law – provided foreign parties invested in China with greater assurance that arbitration agreements determined by a Foreign-Related Arbitration Commission would be recognised under Article 18 of PRC Arbitration Law (the piece of legislation placing the decisions of foreign-related arbitration committees under question, see Table 2). Formally known as the ‘Opinion on Judicial Protection’, foreign arbitration institutions registered within the Shanghai Lingang FTZ can use this precedent to administer arbitration disputes for WFOEs within the FTZ – which now covers an area of 119 square kilometres.

Together, these make dispute resolution in Mainland China more accessible to foreign parties.

What is the “Arrangement Concerning Mutual Assistance in Court-Ordered Interim Measures in Aid of Arbitral Proceedings by the Courts of the Mainland and of the Hong Kong Special Administrative Region”?

A game-changer for UK companies with interests in Hong Kong or across the GBA, these measures see foreign firms treated the same as domestic ones when it comes to applying for Interim Measures from PRC courts.

Interim Measures provide a party going through arbitration with immediate or temporary protection of rights and property, pending a decision by an arbitration commission, be they foreign or domestic. They are often used by one party against another to ensure the protection of assets and evidence when seeking an award – i.e., ensuring that the party one is taking action against will still exist when proceedings conclude. In the past, Chinese courts would only grant Interim Measures to arbitration proceedings administered by domestic arbitration commissions. As a result, foreign parties entering into arbitration with a Chinese party through a foreign-related arbitration commission had no guarantee that the individual or business they were taking action against wouldn’t change the structure of their assets as the case was proceeding to render them legally unable to pay a court-mandated final award. The Arrangement Concerning Mutual Assistance relaxes this restriction and allows PRC courts to grant interim relief to support Hong Kong-seated arbitration – it is the first such mechanism to allow PRC courts to offer interim relief in support of arbitrations taking place outside of Mainland China.

UK companies with interests in China should welcome these changes because they introduce two new ways of structuring their presence in and around the market to provide for greater peace of mind when entering into contracts with a Chinese partner:

China still has a long way to go regarding the development of an international and transparent commercial arbitration regime, but the above are steps in the right direction.

What new restrictions in Hainan tell...

How safe is your IP in China...