Are these ‘Science Cities’ set to be China’s Silicon Valley?

The Greater Bay Area’s response to the need for high-quality basic research institutions is to build them, with four clusters of scientific institutions in Guangzhou, Shenzhen, Dongguan and Cuiheng now emerging – here’s what to expect

When it comes to technology, Guangdong is known for designing, building and selling things. However, there is a step before all of that in the tech industry’s value chain, and it is a step in which the province has traditionally been lagging. Beijing and Shanghai have long had an edge in basic scientific research, given the prevalence of leading universities in both cities focused on exactly this.

Still, Guangdong is not lacking in academic spirit or ambition. There are a number of well-established innovation hubs in Guangdong, such as Guangzhou’s “Science City,” which is home to some of the world’s biggest R&D-focused corporate names, or Shenzhen’s Nanshan Science and Technology Park, which hosts some of China’s biggest tech brands. At the core of the Greater Bay Area master plan is the ambitious “10 hubs” plan to build China’s answer to Silicon Valley, known as the Science and Technology Innovation Corridor (STIC).

Yet it has also become clear that Guangdong needs to raise its game in basic research. That is why the regional master plan has placed so much emphasis on collaboration between Hong Kong’s elite universities and their Guangdong counterparts, as well as research institutes such as Hong Kong’s Advanced Science and Technology Research Institute. Guangdong being the dynamic province it is, however, there was always going to need to be more than one route to scientific achievement. As a result, four major clusters of scientific excellence have been receiving resources and attention from authorities not only at the local and provincial level, but also at the national level. 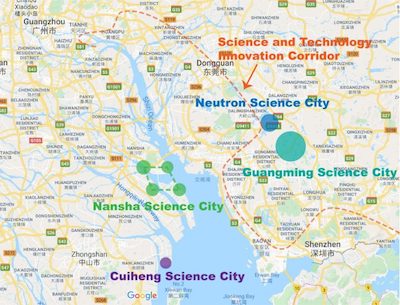 Two of these clusters are located in the tier one cities of Guangzhou and Shenzhen, but not in established tech zones. In Guangzhou, a brand-new Science City is rising in the southernmost Nansha district, one of the province’s three national-level New Areas (the two others being Shenzhen’s Qianhai and Zhuhai’s Hengqin). In Shenzhen, the northerly Guangming area has been chosen for the next stage of the city’s scientific development.

The choice of Dongguan and Zhongshan for the two other Science Cities is perhaps more surprising. Both have grown over the past 20 years from rural backwaters into industrial powerhouses on the back of low-margin export-oriented manufacturing. Yet that is precisely why they were chosen for the next round of experiments in scientific progress: they have manufacturing bases that can be retooled for higher-technology outputs, and they have plenty of (cheaper) land available. In Dongguan, the Songshan Lake district has been the centre of scientific development, while in Zhongshan it has been the Cuiheng district.

Below, Greater Bay Insight gives a brief overview of each of these Science Cities. 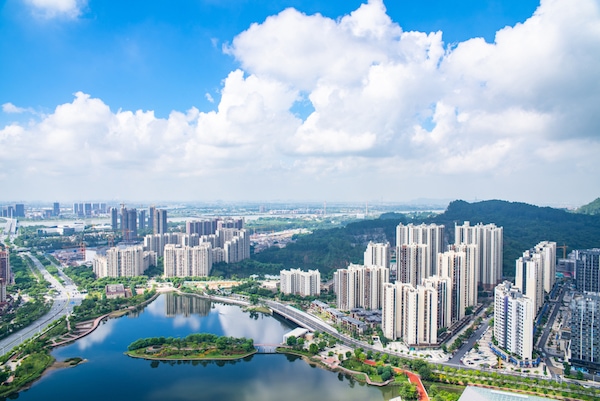 Nansha Science City was formally established in May 2021 when the city government signed a formal agreement for its establishment with the Chinese Academy of Sciences (CAS), the national scientific think-tank and academic governing body.

Essentially, the Nansha Science City aims to accomplish three major goals: to build on existing technological infrastructure, to construct new platforms for fostering innovation, and work to attract “high-end innovative talent” from home and abroad. With an initial focus on advanced scientific research in data processing, life sciences and marine biology, it has already seen construction started on the Marine Science and Engineering Laboratory on 600 acres of land with a total investment of over RMB 8 billion (£889.5 million).

With an initial focus on advanced scientific research in data processing, life sciences and marine biology, Nansha has already seen construction started on the Marine Science and Engineering Laboratory on 600 acres of land

Nansha district itself – once a site of alluvial sand deposits at the mouth of the Pearl River – has big ambitions to become a regional finance and technology hub. Its status as a national-level New Area gives the district certain leeway and expedited approvals for innovative ideas. This has enabled it to build a tech park not far from massive ocean-going transport and logistics facilities at Nansha Port, and a new business district is currently under construction that has already attracted commitment from over 260,000 enterprises, with 79 large-scale headquarters planned for the area. 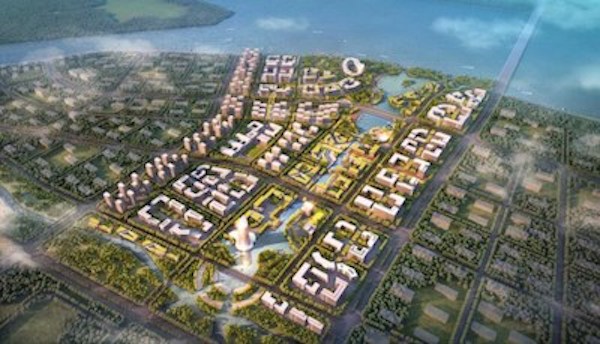 Driving its scientific ambitions is the city government’s enviable tie-up with the Chinese Academy of Sciences (CAS), which has already set up no fewer than 44 national and provincial-level laboratories around the city.

At the core of Nansha Science City is the Pearl Science Park, which covers an area of 3.1 square kilometres and will feature five relocated projects and nine newly-established projects from CAS. It it scheduled to begin its first phase of construction this year and is expected to be completed by the end of 2022.

The Guangzhou college of the University of Chinese Academy of Sciences – the public university under the direct leadership of CAS with capacity to accommodate 4,200 postgraduate students in Tianhe district and 1,800 in Huangpu district in its Guangzhou branch – is also expected to move to the Pearl Science Park.

Established by Shenyang Institute of Automation of CAS, a new project named Guangzhou Intelligent Unmanned System Research Institute, focusing on developing an underwater robotics system, was expected to start construction this September. It has been given the role of an R&D base for China’s intelligent unmanned deep ocean systems. 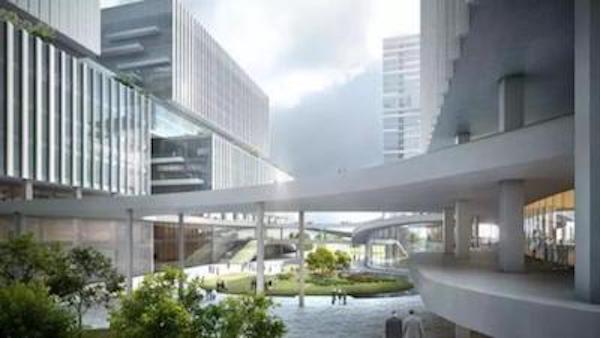 Unlike Nansha, Shenzhen’s Guangming Science City is still in its infancy. The plan was only approved in April, although the founding began in January. However, its mission is no less important: to become the “core engine” of the tech-driven city’s basic scientific research effort.

Once home to dense residential zones and seven state-run production bases for dairy products, Guangming will now be divided into three major scientific clusters covering 99 sq km of land. The first and most important is focused on producing top-level scientific equipment. The other two are centred on Sun Yat-Sen University’s Shenzhen campus and one that contains research institutions and technology transformation platforms. 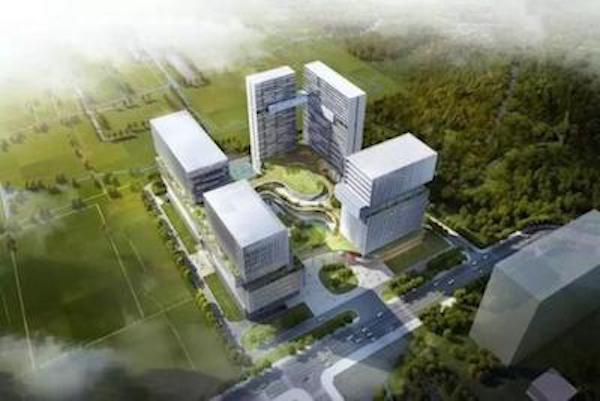 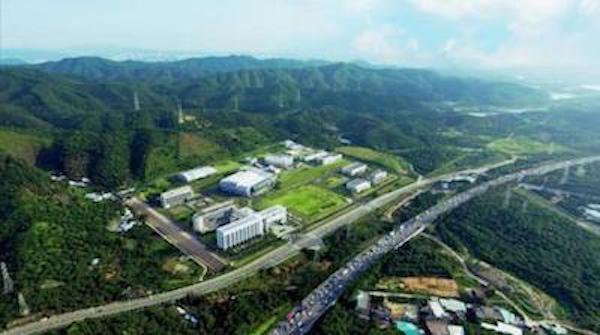 Construction on Dongguan Neutron Science City only began in March this year, but its most important components are already in operation after more than a decade of development: the Songshan Lake Materials Laboratory and China Spallation Neutron Source. Both have made use of high-level support and resources from CAS as part of a strategic plan to turn Dongguan, once a low-cost manufacturing hub, into one of the top clusters for comprehensive material science research in China.

Neutron Science City covers a land area of 53.3 sq km and is building accommodation for universities, research enterprises and large enterprises to attract some 600 scientists from around the world to carry out scientific research in all disciplines. 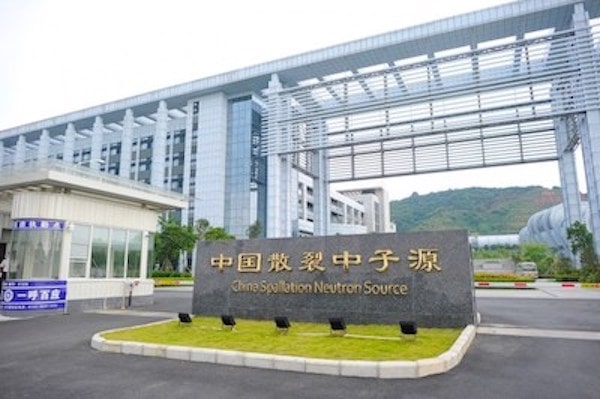 One of only four science devices of its kind (the other three are in the UK, the US and Japan), the China Spallation Neutron Source (CSNS) was formally established in 2011 by the Institute of High Energy Physics of CAS with an investment of RMB 2.3 billion (£256.1 million). Not far from the CSNS is the Songshan Lake Material Laboratory, jointly established in 2017 by the Dongguan government, as well as two CAS institutes with some RMB 12 billion (£1.3 billion) of planned investment on a 4.85 sq km land area. As of June 2021, the laboratory has 257 scientists working in it, including some from overseas.

Among the four newly-planned science city projects, Neutron Science City is the only one that is also part of the Science and Technology Innovation Corridor, the blueprint for China’s Silicon Valley within the overall masterplan of the Greater Bay Areas, which includes Songshan Lake as one of its “ten cores” in Guangdong.

Among the four newly-planned science city projects, Neutron Science City is the only one that is also part of the Science and Technology Innovation Corridor, the blueprint for China’s Silicon Valley within the overall masterplan of the Greater Bay Areas 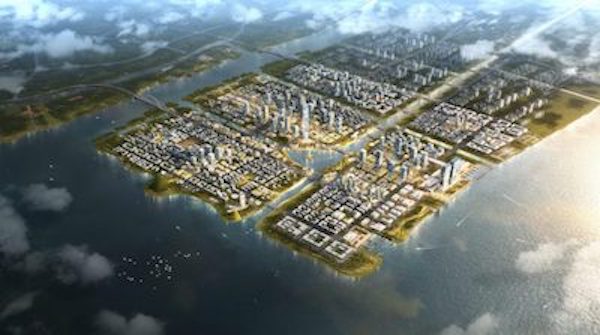 Over on the western side of the Bay, Zhongshan’s Cuiheng Science City is smaller than the other three, covering just 18.27 sq km. However, it has big ambitions. Its development plan was unveiled in May based on a centre for “internationalisation and modernisation” that can accommodate up to 180,000 residents.

The planning of the area, released by the city government, didn’t include any specific names of the projects to be developed besides listing a few functional zones such as a technology and innovation zone, medical city, biotech park, science and education cooperation zone, and wetland zone. What is clear is the emphasis on fostering interaction with key regions across the Greater Bay Area, such as Qianhai, Airport New City and Ocean New City in Shenzhen, several of which are also part of the master plan for the Science and Technology Innovation Corridor in the Greater Bay Area.

Sitting at the end of the Shenzhen-Zhongshan Bridge-Tunnel project, the cross-bay connection due to be completed in 2024, the city is planning to position itself as a key node in the region’s traffic network. According to the plan, Cuiheng Science City will be within an hour’s reach of the region’s major air and rail hubs.

The plan has also listed a number of industry clusters, focusing on electronic information, smart manufacturing and biotechnology. No details regarding scientific research institutes have been specified.

Although these new science cities are being constructed separately, the intention to combine them into a powerhouse of scientific research for the technology-oriented Greater Bay Area is clear. Only time will tell whether they succeed in attracting the necessary talent, and combine their resources in a world-class competitive way.