The number of people in China that live alone is growing – whether due to rising divorce rates, Covid-19 restrictions or lifestyle choices – and they're eating differently too ... 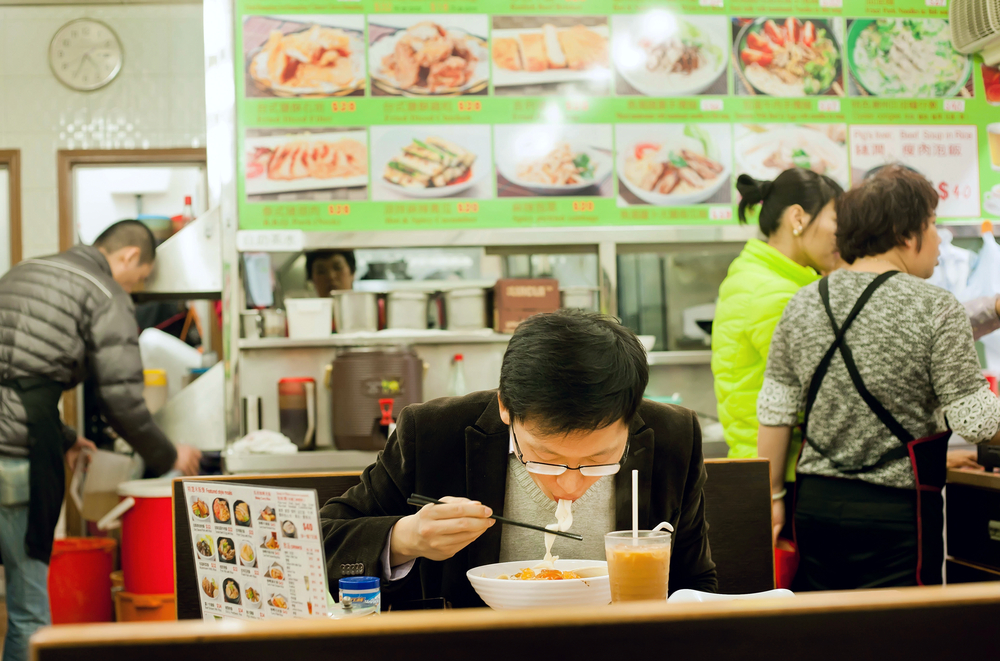 From self-heating hot pot to trendy instant noodles, food and drink brands are rushing to create products that appeal to the growing number of people in China who are single or live alone, writes Qing Na from Dao Insights

Solo dining restaurants with tables and chairs sectioned into individual booths like private train compartments have drawn increasing footfall from white-collar eaters in major Chinese cities over the past few years. The emergence of this kind of solo dining setting is in response to China’s growing population of singles who see dining alone as part of their fast-paced daily routine, further stimulated by Covid-19 controls.

In 2018, the number of single adults in China reached 240 million in 2018, with over 77 million living alone,  with the post-80s and post-90s generations making up the majority. This is a result of continuously declining marriage rates since 2014, coupled with a rising divorce rate, according to the Ministry of Civil Affairs.

The rise in the number of single people has driven up the demand for one-person meals. Unlike the older generations, young Chinese singles don’t show much enthusiasm for cooking by themselves. A report published in 2019 by Sinolink Securities Consumer Research Centre showed that the majority (approximately 42%) of China’s single adults “cook occasionally”, followed by over 20% who “never cook”.

Alongside the rise of solo dining restaurants, ready-to-eat and pre-cooked meals are also gaining popularity as they provide a convenient and reasonably nutritious solution. Takeaway businesses are also tapping into one-person households, adapting meal options normally enjoyed by a group such as hotpot, to versions suitable for single diners.

There has been a refashioning of services and products in the wider food sector as well, resulting in an increasing number of goods falling into the one-person meals category. Products such as self-heating hot pot and instant rice boxes recorded a year-on-year surge in sales of 80% and 800% respectively during this year’s 618 mid-year online shopping season, according to a staff member at the food department of China’s e-commerce giant Tmall.

Despite eating alone, consumers still have high expectations for the food they are eating. Consumers are interested in health value and “yi shi gan 仪式感” or sense of ceremony, fulfilling both their nutritional and emotional needs. Gone are the days when a packet of instant noodles was a solution for solo diners – replaced instead by meals with varied ingredients that cater to the diverse nutritional needs of savvy young consumers. 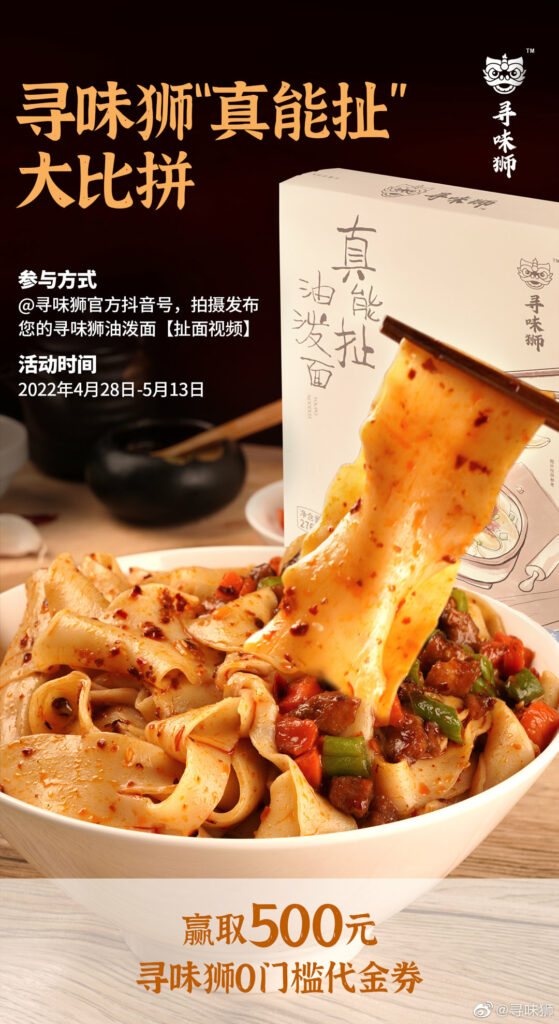 One company that has been leading this transformation is Chinese pre-made dish brand Xun Wei Shi. Xun Wei Shi redeveloped the traditional concept of instant noodles into nourishing meals by incorporating ingredients such as seafood and recipes including braised chicken with red dates, a soup dish that is normally shared amongst families in China and is known for its health benefits.

Further catering to the palates of young people, the brand also introduced internet-famous dishes such as “snail noodles” (luosifen, a traditional Guangxi dish) and biang biang noodles – all designed for single diners. To enrich the dining experience, the brand also includes a small amount of semi-finished dough in their packages so that consumers can have fun hand-pulling the noodles before they tuck in. 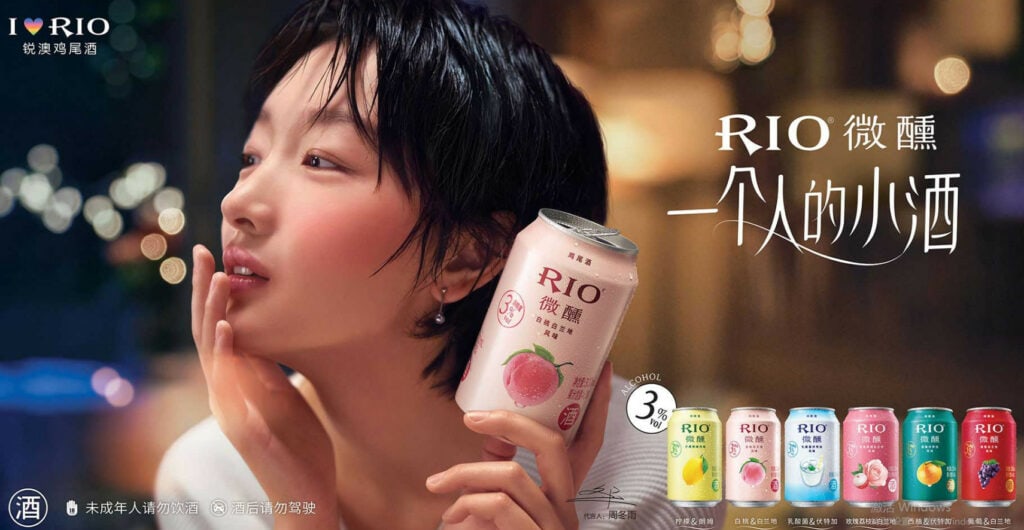 An advert for drinks brand Rio aimed at single consumers

Tapping into the emotional aspect of eating or drinking alone is the alcoholic beverage maker Rio. The brand became a first-mover in China’s single drinking market with the debut of its Tipsy series in 2018, a line with only 3% alcohol that is dedicated to Gen Z single drinkers. Under the tagline “A Small Indulgence on Your Own”, the series includes five fruity drinks designed to be a “companion” for young single dwellers. The slogan appears to have resonated with the younger generation, with the hashtag reported to have drawn in over 270 million views on China’s largest microblogging site, Weibo, in the first week of its product release. 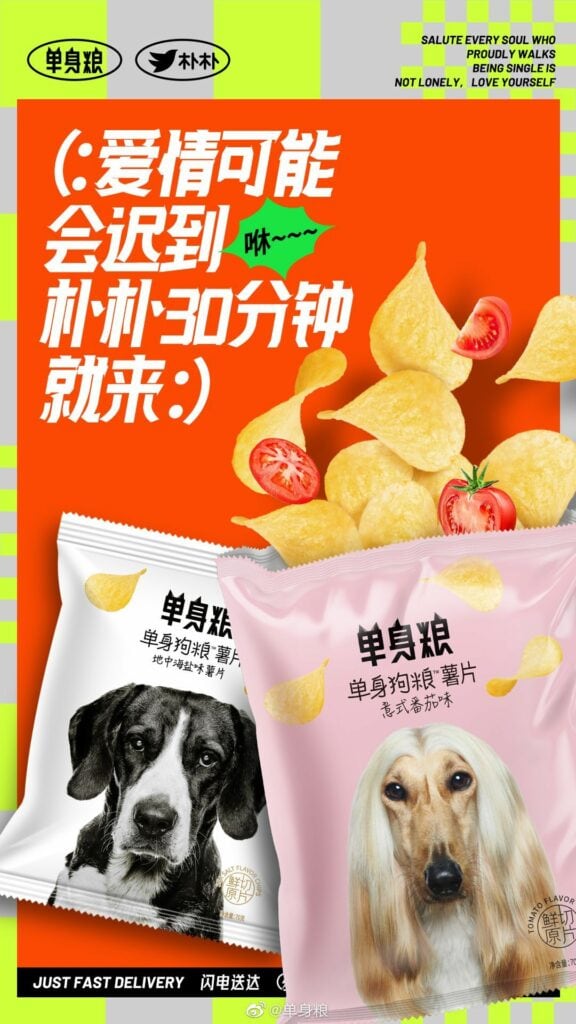 Other brands have attempted to build Single Culture into their brand positioning, including the snack maker Dan Shen Liang, which literally translates to Singles’ Food. With pictures of dogs imprinted on its packaging, the brand smartly capitalises on popular Internet slang such as “single dogs” (a humorous term used to refer to singles in China) and “dog food” (a term used by singles to describe public displays of affection) while also allowing it to tap into the growing number of pet owners in China, many of whom have turned to animal friends as a cure for loneliness.

China’s young singles are pushing constant innovation in the country’s food and drink industry. The increasing number of sophisticated single diners means that any brand looking to enter the Chinese market needs to consider both their marketing narratives and the formats of their products in order to cater to the taste buds of this lucrative demographic.

How to get your medical device approved for sale in China

Is the British Library’s ‘Chinese and British’ exhibition worth seeing?