On 29 April 2021, with a live performance from the Xi’an Symphony Orchestra taking place in the foreground on the Chinese island of Hainan, China’s Tianhe module was blasted into space. It carried the backbone of what will become the country’s first space station.

Just over two weeks later, China landed an unmanned spacecraft on Mars. State media hailed the China National Space Administration’s Tianwen-1 probe as having “spectacularly conquered a new major milestone” after its lander and rover, named Zhurong, parachuted onto the surface of the red planet.

After more than a year of Covid-19 related news agendas, Beijing’s space progress and ambitions had finally returned to the global front pages.

The US is the only other country to have landed an unmanned craft on Mars, having done so with its rover, Perseverance, three months before Zhurong. With President Xi Jinping pushing China toward becoming a global superpower on a par with the US, the Mars rover space race highlights the role of the countries’ space programmes in what many view as the world’s most consequential power struggle.

Strengthening the Belt and Road

As is the case for every country with a space programme, launching probes towards the stars is more than exploration for exploration’s sake. China’s expanding space programme has also had political and economic benefits for the vast Belt and Road infrastructure and trade initiative, encompassing around 70 countries.

“Often there’s some sort of data sharing agreement where China will help and support the building of a communication satellite,” Kaitlyn Johnson, deputy director of the Aerospace Security Project at the Washington-based Center for Strategic and International Studies explains. “China then launches it, and then they get some of the data from the satellite.” Deals such as these can be viewed as equivalents of agreements between NASA and space agencies such as The Australian Space Agency.

Johnson continues: “For the US, one of its largest partners for this kind of activity is Australia, because it’s on the opposite side of the world, so it’s an extremely valuable partnership for the US. China is building those partnerships right now with emerging nations.”

The Tianwen-1 probe’s Mars mission is likely to be China’s standout space feat of 2021, but it has plans for the following year that could be almost as significant.

The Tiangong space station, China’s first non-trial space station, is expected to be operational by 2022. It will have living quarters and will conduct research in low Earth orbit some 340 – 450km above the planet’s surface.

With the US barring China from access to the International Space Station (ISS), the launch of Tiangong will be an interesting test of global political pull. “The Chinese space station is a really interesting project to watch,” says Johnson, “[to see] who is collaborating on it. It’s not just Russia; it’s also many European countries and others around the world.”

The US is a strategic rival to what China is trying to accomplish. China has taken note of that, and started to partner with nations that the US has not

This may not bother the US too much as it shifts focus from the ISS to its forthcoming Gateway: an outpost that will orbit the Moon and will form part of plans for humans to make what NASA calls a “long-term return” to the Moon. Still, it will be an interesting power dynamic if China dominates new low Earth space research for a period of time.

“I do think that there’ll be some sort of a gap between the end of life of the ISS and the lunar Gateway,” Johnson acknowledges. “So the United States, for a couple of years, will probably miss out on experiments in orbit in the way that we’ve [the US] been accustomed to for the past 20 or so years.” 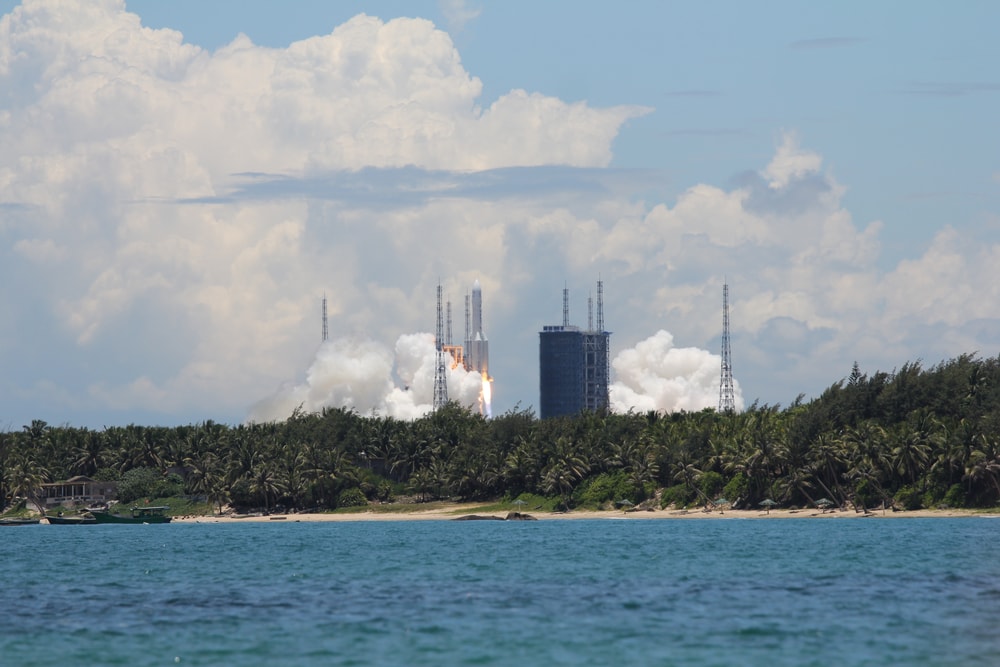 Many China hawks are suspicious of Beijing’s designs on space with regards to surveillance and military ambitions, citing obvious links between nations’ space programs and their armed forces. In 2020, for example, China launched its latest BeiDou satellite, powering a navigation system comparable to the US Global Positioning System (GPS).

“People were used to Russia [as a military concern to the US], because Russia has always been a dominant space nation,” Johnson commented. “Now that China sees space as both a form of national development and prestige, it is inciting worry in some national security experts.” China’s secrecy about its military goals has added fuel to these concerns.

However, Johnson says that 2020 was seemingly a quiet year for China’s space programmes in terms of military focus, as civil projects took priority — with the caveat that Beijing’s secrecy means the full picture is yet to be known.

Read Also
Why China will become a tech superpower by 2050

“A lot of the civil technology that we look at [China having in space] is dual use,” she says. “By that we mean that it could be used for both civilian or military purposes. This is something that goes across any country’s space investments.”

“There tends to be this conflation of [China’s] civil programme and their military programme, and that any advancement in either means that something is bad for the United States. I don’t tend to believe that,” she adds. “The progress that China is making in its civil capabilities, sending a rover to the moon – sending the orbiter and lander to Mars – these are steps that the United States has taken time and time again, and that other countries are pursuing.”

China’s claims of sovereignty are highly contentious issues for many of its neighbours. Due to the 1967 Outer Space Treaty, no nation can claim territory on a celestial body, but there are still plum spots to park space infrastructure.

Johnson said there are areas around the Moon that offered “perfect orbital space” for units such as satellites, where they don’t fight gravitational pulls from Earth or the Moon, optimising fuel use. “Everybody’s trying to make a punt for those spots,” she said. Establishing a notion of space sovereignty won’t always be as simple as planting flags on planets. In the long-term, there is likely to be more competition between nations for desirable zones.

Speaking of these “perfect” areas around the Moon, Johnson said: “It’s like there are three parking lots with, right now, about six cars. Eventually, it will get full. Right now, it could host everybody, so it’s not a concern in the immediate [future], but as people look to establish a human presence on the Moon and permanently in cislunar space [between the Earth and Moon], it could get crowded.”

As Johnson explained, many nations, including China, Russia, the US, Europe, the UAE and India are aiming for this cislunar space, and although there are no claims of sovereignty, “if you’re the first there, you definitely have some sort of advantage.”

Johnson says that China is likely to establish infrastructure around these spots “in the next decade or two. I don’t think they will ‘beat’ the United States, but I do think they will be close behind.”

Johnson said that when it comes to global space clout, “We talk about the big three, which are the US, Russia and China. I don’t know if ten years ago we talked about China in that same context.”

China’s increased focus on space projects is occurring during the early stages of President Xi’s push to make China a world superpower by 2050. The space presence and spending that made China part of this ‘big three’ is still far behind that of the US, but the gap is narrowing.

Johnson says she doesn’t expect China’s space spending increase to be curtailed over the next five to ten years, or likely beyond.

“Obviously, there are economic factors – any of these [programmes] could be derailed by science not working out as fast as they hoped, or by potential conflicts that put a halt on spending. But space is a big part of China’s move to establish themselves as a premier world player. And they are – not just in the economy, but in space.”

Many political commentators talk of a global political tilt to the East occurring, making China’s partners in its space ambitions pertinent beyond even Belt and Road link-ups. Diplomatic relations between China and the US, plus between China and many western countries including the UK, are frosty, and China’s space diplomacy choices are heightening rivalries.

On the scientific side, China does have good relations with the European Space Agency, but there’s been a far bigger push from Beijing to strengthen China’s space ties with Russia. The two countries are cooperating to build a research base on the Moon: the International Scientific Lunar Space Station. “This will be the largest international space cooperation project for China, so it’s significant,” Chen Lang, a China space programme analyst, told AFP in March.

“The United States is a strategic rival to what China is trying to accomplish,” says Johnson. “[China has] taken note of that, and started to partner with nations that the US has not. So we see the shift.” She added: “Part of it is maybe the US alienating and having competition with Russia as well as China, allowing China and Russia to find lines of cooperation that they might not have found ten years ago.

“I’m not trying to say that it’s Russia and China versus the United States, and we will all end in a space war – I don’t think that’ll happen. But it is interesting to look at who they choose to cooperate with.”

China might be dominating the 2021 space news agenda. But if the predictions ring true, it seems like things are only just taking off

China is well-positioned to keep its space push on track. In a political system such as China’s, the kind of long-term plans required for legacy space programme planning can be undertaken without factoring in potential political change.

China, unlike in the US, can easily relocate citizens to make way for infrastructure such as the Five Hundred Metre Aperture Spherical Telescope (FAST) – the construction of which saw thousands of Guizhou province villagers moved from their homes. Issues such as rocket debris potentially harming citizens, which would likely cause media uproar in other countries, can be absorbed with little public pushback.

As far as Johnson is concerned, “there are certain advantages that the Chinese government has, because they’re not beholden to the people – they can invest money where they see fit. They can prop up a lot of different programmes, systems or companies until there is success, whereas the United States can’t operate like that.”

“We’re not expecting anyone to get to the Moon and establish a lunar base until the late 2030s and 2040s – this is a long horizon. Most space programmes have such a long horizon because they take so long to develop and launch and establish. So, they’re definitely in it for the long game,” she concluded.

With Mars landings and space stations, China might be dominating the 2021 space news agenda. But if the predictions ring true, it seems like things are only just taking off.