No longer just a low-cost manufacturing hub, today China is a high-tech destination with a flourishing design culture and an appetite for innovation. The Design Intelligence Award offers UK innovators a chance to tap into this huge potential market.

Conventional Western thinking has often positioned China as a “fast-follower,” an absorber of technology rather than an innovator. However, in recent years, growth in multiple indicators, including R&D spending, patent applications and scientific publications, show that China is taking measures to dramatically upgrade its domestic innovation capacity. For example, in 2019, China became the world’s biggest source of international patent applications, filing 58,990 applications via the World Intellectual Property Organisation’s Patent Cooperation Treaty.

China has also made significant strides in intellectual property protection, formerly a key area of concern for design-led companies considering the Chinese market. The introduction of a new Civil Code in 2020 brought with it important changes to the country’s IP system, in particular by cementing the principle that punitive damages can be claimed against infringers.

Beyond that, a new generation of creative talents are finding inspiration within China, rather than from foreign products or designs. The number of design colleges alone has grown from 300 to 1,800 in the past 10 years. Some sources suggest that there are now more than 50,000 designers in China, including architects, urban planners, industrial and graphic designers, and, most crucially, advanced digital designers.

The rapid pace of change in the Chinese market and the openness to new technologies and experiences represent a major opportunity for innovative UK companies, which they can leverage via programmes such as the Design Intelligence Awards (DIA). 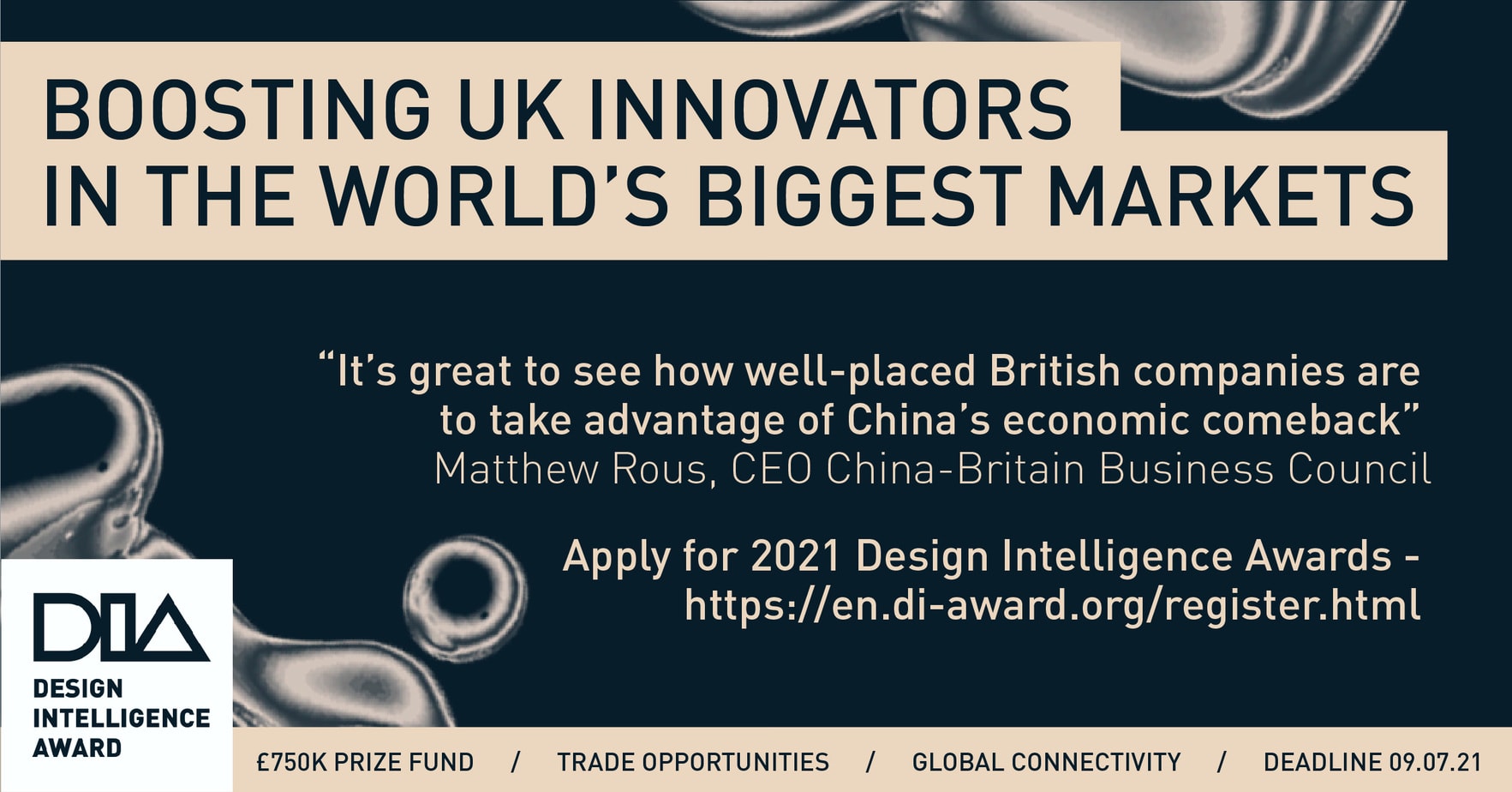 What are the Design Intelligence Awards?

Now in their sixth year, the DIA is one of the world’s most prestigious award programmes. It represents an opportunity for UK entrepreneurs to access global decision-makers, investors and commissioners, build their reputation internationally and grab a share of a £750,000 award fund.

A golden opportunity for UK businesses

The DIA offer exposure to these markets and UK applicants are serial winners. In 2019-2020, UK winners included Tampliner and Hero Arm, who were awarded £140,000 and have gone from strength to strength, winning Fast Company, Time, and Dyson innovation awards. In 2020, UK applicants were awarded more funding than Japan, India and Germany combined. UK innovators topped the international league tables outside China, with 18 finalists, and 20% of UK applicants were selected as finalists from a field of 7,000 applications.

Visit this link to apply for the Design Intelligence Awards — the entry deadline for UK applicants is 9 July.

China to allow couples to have three children

What is Xiaohongshu and how can it help your brand in China?