What China’s experience tells us about Biden’s manufacturing plan

The Biden administration wants to revitalise the US manufacturing sector to compete with China. However, facing stiff competition from Europe and East Asia, is likely to face the same problems China has if it wants to establish a self-sufficient domestic manufacturing industry. Read the full analysis below.

Since former US President Donald Trump launched his trade war with China, competition with Beijing has become an obsession in US politics. His successor, Joe Biden, now appears to be intensifying efforts to prevent China from overtaking the US as the world’s largest economy. Thus, Biden warned US Senators in February – after his first call with Xi Jinping – that China would ‘eat our lunch’ if the US did not increase its own spending on infrastructure and other domestic industries.

One area that will benefit from the US government’s largesse is the manufacturing sector. Spurred by concerns over supply chain dependence on China, the Biden administration wants to massively increase investment in domestic production. The planned US$2 trillion (approx £1.4 trillion) infrastructure bill includes several provisions to support domestic manufacturers as well as SMEs.

Perhaps surprisingly, the rivalry with Beijing appears to have led the White House to embrace policies that resemble China’s directed industrial policy far more than the classic liberal, market-driven development the US has championed since the 1980s.

But rather than becoming a ‘planned economy’ as some critics fear, it is more likely that the Biden administration’s attempts at import-substitution will run into the same roadblocks as China’s ambitious Made in China 2025 strategy.

Read Also
Why China will become a tech superpower by 2050

Countering the trend has become a major objective of the Biden administration. In September 2020, his team released a ‘Made in America’ plan which aims to turn the US manufacturing sector into the ‘arsenal’ of the country’s post-Covid recovery. 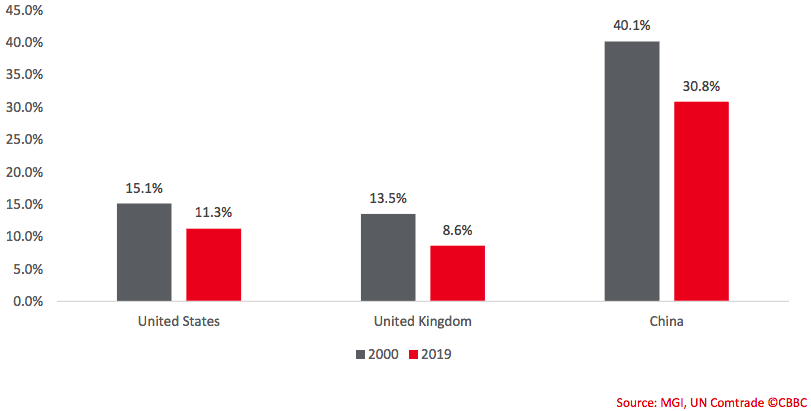 Since his inauguration, President Biden has proposed several bills to turn this plan into reality. Most prominently, the aforementioned infrastructure bill, which includes several provisions to develop critical technologies and upgrade America’s research infrastructure. The plan foresees an investment of more than US$52 billion in domestic manufacturers. Additionally, the Biden administration wants to spend similar amounts on domestic basic research and semiconductors.

Click here to read the full analysis, including what sectors may be affected and how a strong dollar and supply chain concentration challenge Biden’s plans.

From Cartier to Gucci: 5 luxury brands that nailed their China marketing