Home ConsumerCulture Frank Langfitt talks about his adventures as a part-time taxi driver in Shanghai, and his book The Shanghai Free Taxi
Culture

Frank Langfitt talks about his adventures as a part-time taxi driver in Shanghai, and his book The Shanghai Free Taxi 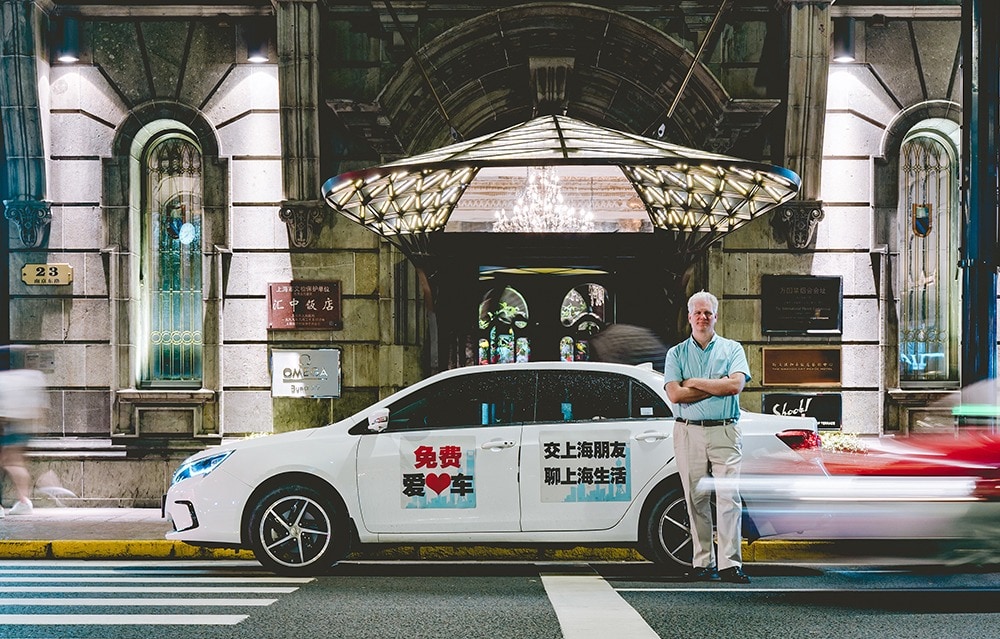 Frank Langfitt is has been NPR’s UK correspondent since his arrival in London in 2016. Previously he spent five years as NPR China correspondent based in Shanghai. During his time in Shanghai, he drove a free taxi for a series on changing China through the eyes of ordinary people. He has now released a book The Shanghai Free Taxi: Journeys with the Hustlers and Rebels of the New China featuring those people. Here he speaks to Paul French

Paul French: A Shanghai free taxi? You’ve got to explain the concept, please?

Frank Langfitt: I got the idea from my experience as a cabbie in the 1980s in Philadelphia, my home town. I found driving a cab was a great way to meet and talk with a wide variety of people, who would often share their thoughts and open up about their lives in the privacy of a taxi.

Flash forward to Shanghai in 2014. As a reporter, I was looking for a way to understand the changes in China from the ground up, so I created a free cab service with signs in Mandarin. People in Shanghai know a good deal when they see it.

I met a lot of people this way and then followed the lives of my most interesting passengers for the next four to five years around China and around the world.

People often ask if the Chinese government tried to stop me. In fact, Chinese state security knew what I was doing but never interfered. I later heard indirectly that one agent who monitored me actually related to the characters and liked the free taxi stories, which I broadcasted on NPR. PF: Your subtitle is ‘the hustlers and rebels of the New China’ – for those migrating to the city is hustling and rebelling in myriad ways essential?

FL: I think hustling is the natural state of the Chinese migrant. Migrants have to work extremely hard to pay for housing, food and other amenities in an expensive megacity like Shanghai. In addition, they always need to be looking for ways to get ahead given the incredible competition in a city of about 24 million people.

Under China’s household registration system, migrants don’t enjoy the same benefits to health care and education that people born to cities like Beijing and Shanghai do, so that is another source of frustration and insecurity.

Most people in Shanghai don’t rebel. They are too busy just trying to get by. This societal and economic pressure works to the advantage of the Communist Party.

I did meet some people who were rebellious, which made them all the more interesting. They included Fifi, who tried to teach high school politics in post-Tiananmen China, and Ashley, who moved overseas, rejecting the systemic corruption that her parents, Communist Party officials, had little choice but to embrace.

PF: One of the characters, Sarah, is very typical of many young women migrating to the city for work and a new life. After two decades of internal migration, what’s changed for the Sarahs of China coming to Shanghai?

FL: Sarah is an archetype: the young woman from the provinces trying to make her way in the big city. But the Sarahs of an earlier era were very different financially and educationally.

Sarah 1.0 would have arrived in Shanghai in the 1980s or 1990s. She would’ve been a blue-collar woman with limited education who would’ve found work in either factories or homes, cooking and caring for children.

Those migrants still exist, but Sarah 2.0 is a different species. She is a college-educated, aspirational professional, who has benefitted from decades of strong economic growth and China’s massive expansion of university education.

For instance, when I first met Sarah, she was working for a company that made computer chips for credit cards and wasn’t sure whether she could find a foothold in Shanghai.

Years later, we had lunch at a university cafeteria where she was getting her masters in psychology – with financial help from the government – and aiming for a PhD.

To put this in perspective, Sarah’s mother, who also lived in Shanghai, cleaned rooms at the Ritz Carlton a few blocks from my apartment. PF: Your interviews seem uniquely penetrating and successful. Any tips for getting meaningful and helpful conversations going in China?

FL: Thanks. I’m glad you found them interesting. The key to the free taxi concept was that it turned the normal foreign reporting process upside down. When passengers stepped into the car, they started interviewing me, so they felt much more comfortable directing the initial conversation than facing questions about sensitive issues from an American reporter.

I used other techniques as well. One was what the American writer Gay Talese once called the art of hanging out. I spent hours in the car, in people’s homes and later on the phone, just chatting and listening and letting people bring up more personal or sensitive topics when they felt comfortable.

A boss had forced him to work as a human ox, ploughing a field in Xinjiang

Sometimes, I spoke with people for two hours and only 10 minutes near the end of the conversation was relevant and useable. I also tried to be patient and wait until people were comfortable revealing painful parts of their pasts.

When I asked one character, Charles, about spending years travelling across the country from one dead-end job to another, he repeatedly broke down.

Two years later, I pressed him on his experience. He told me a horrific story where a boss had forced him to work as a human ox, ploughing a field in Xinjiang in China’s far northwest.

In another example, it took several years before a woman I knew was willing to reveal and detail how she had suffered a forced abortion.

PF: You say ‘trust is a scarce resource’ in China’s cities. Is this not the case in all big cities or is Shanghai, as some would argue, especially ruthless?

FL: To varying degrees, distrust is a part of the urban experience, but I think it is more acute in China and Shanghai for several reasons. Consider Fifi, whom I mentioned earlier. One day, her knee gave out while she was crossing the road and she sat on the pavement for twenty-five minutes. No one helped her. The reason: they feared that if they did, she would falsely blame them for her injury and sue them.

In an infamous case, a judge ordered a young man to pay $7,000 in compensation to an elderly woman who’d fallen at a bus stop. The judge argued that no one would help a stranger unless he or she had been responsible for their injuries.

The atmosphere of deceit and distrust is driven by a clash between an old, rural system of ethics based on family and kinship ties, and the reality of a modern megacity

Yunxiang Yan, a professor of anthropology at UCLA, says this atmosphere of deceit and distrust is driven by a clash between an old, rural system of ethics based on family and kinship ties, and the reality of a modern megacity, such as Shanghai, filled with people from all over China and around the world.

“Taking advantage of a stranger or even hurting a stranger might not be considered as morally wrong because that stranger is not part of the group,” Yan told me. “Morality is relative.”

To me, this tension seems even sharper in Shanghai, which has a long, colourful history of cons and scams. Consider, the Merriam-Webster dictionary defines Shanghai as “to put aboard a ship by force often with the help of liquor or a drug.” I never encountered anything so severe, but it was common for sex workers on Nanjing Road, Shanghai’s main shopping street, to lure tourists to private rooms where thugs threatened them and maxed out their credit cards.

PF: You first covered China back in the ’80s and ’90s and then again more recently. Many of your passengers were millennials and younger people. What are the big generational differences we need to understand and appreciate?

FL: There are big divisions between parents, who may have grown up during the political tumult and poverty of the Cultural Revolution (1966-1976), and their children, who have only known spectacular economic growth.

Children tend to be far more worldly and better travelled than their parents. They also spend far more of their savings, because they’ve never lived in a time in China where annual GDP growth fell below six percent. But this is only one of many generation gaps.

The velocity of change in China is so great that a generation lasts between three to five years. For instance, one person I got to know, Ashley, was born in 1989 and grew up with access to Google and the writings of the Tiananmen democracy figures. She spent a semester during her MBA in Paris, interacting with younger classmates who had grown up in a much more nationalistic China where the internet is heavily censored.

One classmate, who was just five years younger, said he thought the 2014 Occupy campaign for democracy in Hong Kong was crazy and stupid and the protesters were trash.

Ashley, by contrast, was sympathetic to the cause. “I think generally people who are born in the eighties, most people with sense, would think that democracy is a good thing,” Ashley told me, “but I think the younger generation doesn’t think that way anymore.”

Art partnerships between the UK and China are on the rise

How China saved the treasures of the...