Home Consumer When was the first British Airways flight to China?
Consumer

When was the first British Airways flight to China?

The first British Airways flight to Beijing was a key moment for the airline and for British business in general, writes Paul French. This is just one of the many key events that have taken place during the 50 years since the establishment of ambassadorial relations between China and the UK

British tourists were heading to China by the end of the 1970s, but invariably having to fly with TAROM, Iran Air or Pakistan International Airlines. It was clearly time for the flagship carrier, British Airways, to fly to Beijing.

Starting in November 1980, a Boeing 747 departed every Wednesday from Heathrow, with first, club and tourist classes available. The deal was in partnership with the Civil Aviation Administration of China (CAAC). Tourism was steadily growing, but BA’s initial focus was on the emergent business traveller looking to unlock the potential of what was then 980 million customers.

Yet it almost didn’t happen. In November 1979, a trade delegation led by Chairman Hua Guofeng spoke with Margaret Thatcher and agreed in principle to a direct air link – one flight a week operated by BA and a reciprocal weekly service by CAAC. The first stumbling block was that BA suggested Gatwick for the flight. The Chinese delegation felt this was not prestigious enough and demanded the flight be based out of Heathrow. BA then got nervous, fearing the route would never be profitable and worried about the adverse effect a loss making service could have on its impending privatisation. To make things tougher, China was insisting on a revenue-sharing deal that would effectively mean BA ended up subsidising the CAAC service.

Read Also
A timeline of China-UK Ambassadorial Relations: The 1980s

Everything eventually got sorted out. The route was moved to Heathrow while BA accepted that, as a national flagship carrier, it would inevitably have to run some potentially loss-making routes. Initially, it was agreed that BA would run the Beijing service via Hong Kong (though was not allowed to pick up any Hong Kong residents from the then colony to fly to Beijing) until the passenger traffic was sufficient to fly direct. There was an element of European politics in the concessions made to get the service up and running, too. In April 1980, a Beijing-Paris service had been launched by Air France and CAAC. At the time that route used CAAC’s only 747, so the Chinese made an order for two more. 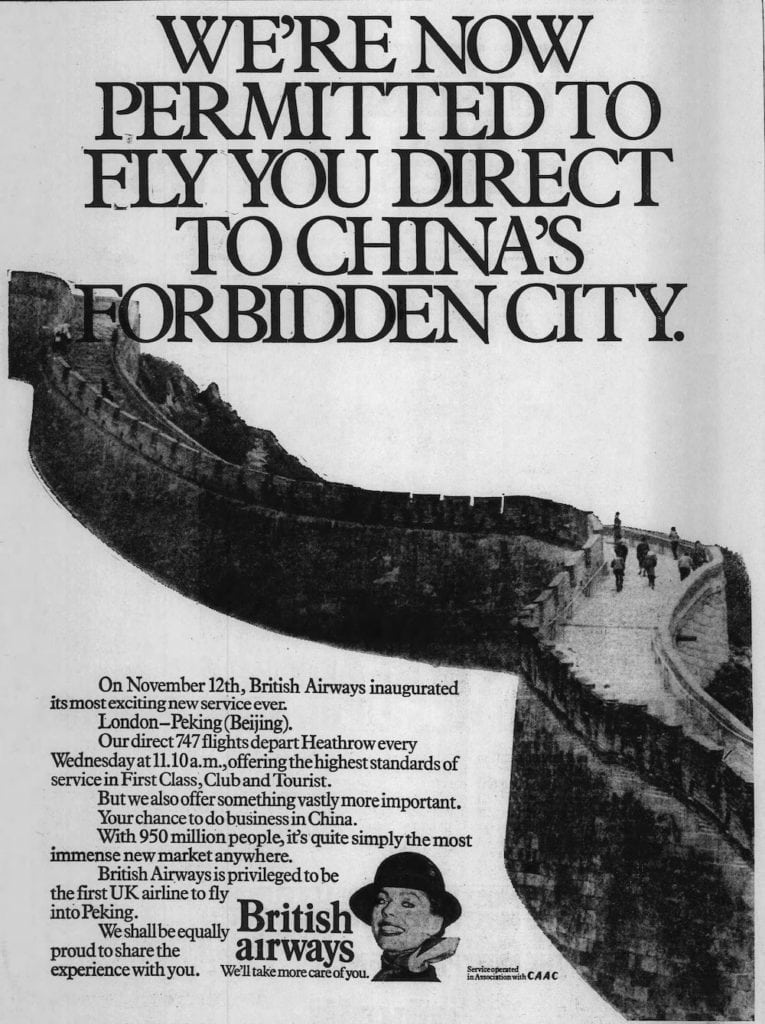 An advert for BA’s flights to Beijing

The inaugural flight took off at 11.10 am on 12 November 1980, flying 18 hours to Beijing with stops in Bahrain and Hong Kong. It wasn’t a cheap trip — Club Class was £936 return (about £3,500 today) and First Class passengers paid £2,345 (a whopping £8,900 return). There was a soft power element to the trip too; the plane carried extensive files of medical data on Ching-Ching, the giant panda who had arrived at London Zoo from China in 1974. Poor Ching-Ching had been ill, thankfully recovered, and zoo officials now hoped she might mate with Chia-Chia. Sadly, they never got it together, but panda experts in China and Britain tried their best to encourage them.

And so, BA launched its London-Beijing service as a regular flight eventually departing several times a week. Later they flew the Queen to China in 1986, arranged a visit by Concorde in 1995 and launched a London-Shanghai direct route in 2005.

What is the impact of Covid-19 on British businesses in China?

How to sell in China: E-commerce platform or branded website?

How does Xiaohongshu work and why...