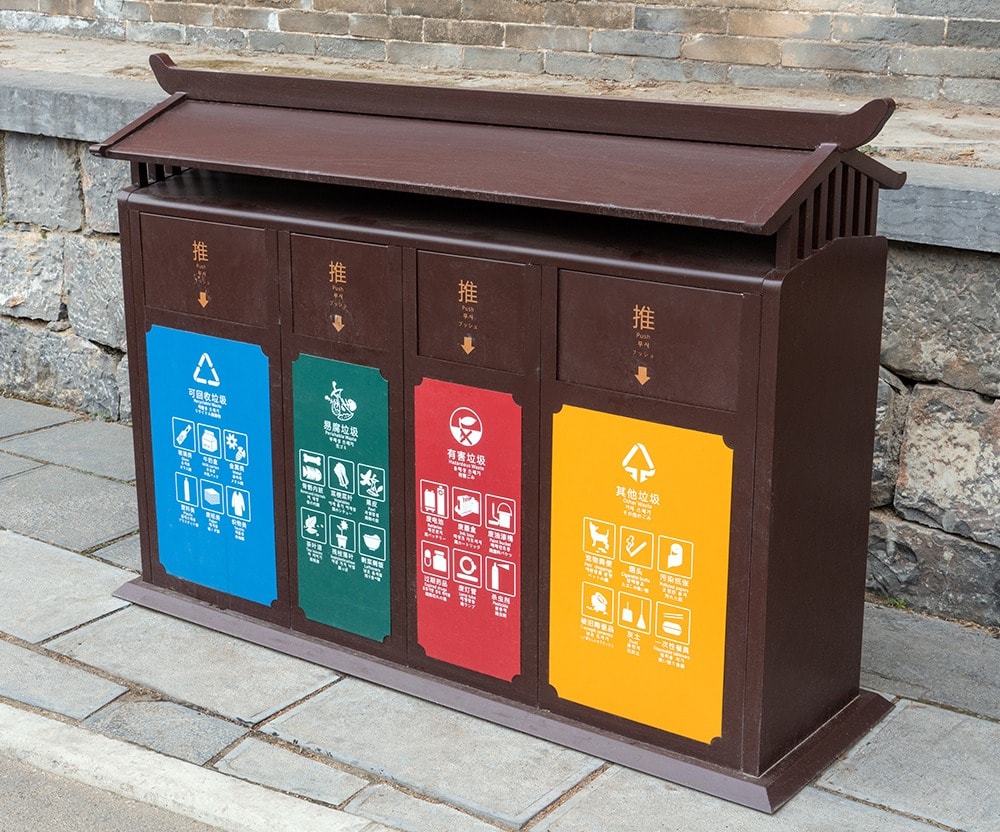 Before new recycling rules came into effect last summer, taking out the trash used to be simple for Ni Yuan, a resident of a leafy middle-class Shanghai neighbourhood. She would sort household waste into only two categories, wet and dry, and deposit it at her convenience.

On July 1, the Shanghai government enforced the Domestic Waste Management Law, making it mandatory for all citizens and businesses to recycle waste into four categories at designated times of the day.

Failure to comply now results in fines of up to RMB 200 (around £22) for individuals, rising to RMB 50,000 (£5,500) for companies. While Shanghai officially adopted a recycling policy fifteen years ago, this seems to be the first with teeth.

The recent crackdown is the latest battle in China’s war on pollution, first declared by Premier Li Keqiang in 2014. If successful, it could become a shining example of how to clean up cities in the modern digital era — and a template for Southeast Asian nations struggling to decouple their economic growth from waste production. Failure could prove the opposite: that a centralised, top-down approach to socio-economic reform has serious limitations.

The municipality of Shanghai has implemented a variety of measures to educate the population to correctly sort their waste. In a bid to win over youngsters, video games have popped up in arcades around town offering players a chance to practise their trash-dunking technique.

Along with them, gaming apps for smartphones help users navigate the new rules. Virtual Reality simulators have also appeared around town, allowing players to accrue points by dropping waste into imaginary bins.

“It’s simple and easy to understand. Residents can practice sorting garbage without actually going through their trash, and it is a more effective method than using paper materials when training volunteers,” Wu Xia, founder and chief executive of VitrellaCore, the company that created the game, told China Daily.

Not only video games, but also songs about recycling set to the tune of revolutionary-era hits have gone viral.  Even Peppa Pig has acted as a guide on the dos and don’ts of kitchen waste – often reused as animal fodder. In residential compounds, wardens go door-to-door educating people on the new protocol.

Smart bins use this technology to weigh the amount of rubbish deposited and assign social credits in the form of gifts or cash rebates.

In Shanghai, any initial resistance to the reforms appears to have acquiesced with many embracing the call for collective action. “At first a lot of people complained that it wasn’t convenient. But this is exactly what garbage sorting means, you have to walk to a certain place at a certain time so the system can work”, says Ni.

“People have just gotten used to it, as is so often the case here,” observes one expat resident.

Ancillary news reports and social media campaigns are also dying down. Ni Yuan noted that in her residential compound wardens no longer need to instruct people on how to sort their trash. “At the beginning, I had doubts at the grassroots level that the government could do things right, but they did. People are taking this seriously”, she says.

Shanghai has invested over US$ 3 billion in the recycling system so far, according to the Ministry of Housing and Urban-Rural Development.

Artificial intelligence projects benefited from these investments. Such projects have become central to the Chinese approach, and make use of facial recognition. For instance, smart bins use this technology to weigh the amount of rubbish deposited and assign social credits in the form of gifts or cash rebates.

Conversely, facial scanning has been used to punish violators. Surveillance cameras identify in real-time people who drop litter in waste-free spaces. Perpetrators will get a fine, and in some instances, have their face humiliatingly projected onto public screens, reports the South China Morning Post.

Environmental groups agree that while it’s too soon to tell how lasting these reforms are, early signs are promising. “It is still too early to say it is successful or not, but it is absolutely a great start. According to the data the Shanghai government released, more than 8,000 tonnes of kitchen waste is being sorted every day. It is beyond the target they set” says Miao Zhang, founder of Rcubic, a Beijing-based social enterprise that tackles waste. She attributes the success to “powerful and efficient community management systems”, rather than tech aids. “A greater share of waste is being treated according to waste management practices. It is a better situation for the environment,” says Liu Hua, a campaign specialist in waste and resources, collaborating with Greenpeace Beijing.

However, not everyone is so optimistic. Simon Ellin, chief executive of the UK’s Recycling Association, represents the interests of UK businesses which have been adversely affected by China’s ban on foreign waste imports. He believes that ­– despite the big investment – China currently lacks the capacity required to process its domestic waste output.

Chinese imports of foreign waste fibre fell by 80 percent in the past three years. The same has happened to plastic and scrap metal.

“This leaves a huge capacity gap”, says Ellin. “Part of the objective is to become self-sufficient to stimulate their own domestic infrastructure, but they are a long way off.” To meet the shortfall, he says domestic manufacturers are importing more virgin fibre which “flies in the face of any environmental ambitions”.

On the other hand, green reforms are also creating new opportunities for business.

Alibaba founder Jack Ma, has promised to formulate a “green logistics standard”. Other e-giants are following suit. Jingdong, an online platform, offers buyers the option of selecting a “green box” for free, a type of packaging that can be reused up to ten times. The company estimates the initiative could save US$ 4.7 million per year if 10 percent of orders switch.

According to a 2018 study by the Ellen MacArthur Foundation, circular economy policies in 2030 could save Chinese businesses and households approximately US$ 5.1 trillion on high-quality products and services.

China is the second-largest producer of urban waste globally after the US, according to research by the World Bank, which estimates that by 2030 China will have twice the volume of municipal solid waste (MWS) than America.

Despite heavy investment into incineration capacity, much pollution still ends up in landfill, waterways or the ocean. China needs better solutions to prevent cities from drowning under the weight of their own rubbish.

Last year, China launched a zero-waste cities pilot programme. The Ministry of Ecology and Environment has chosen 11 cities as model trash-cutters. Amongst them are Shenzhen, Chongqing, Hainan and Beijing’s Xiongan new area. They aim to recycle 35 percent of waste by 2020, up from less than 10 percent today. Shanghai has been the last to join the programme.

Like other rich cities, Shanghai is moving towards a circular economy, where waste is not rubbish but a potentially valuable commodity. Ni is already convinced: “Shanghai will become a study centre for a lot of Chinese cities”. Those who fail to grasp this could end up wasting a golden opportunity.

Could carbon dioxide could prove a valuable asset in the fight against climate change?