Home News Confident, friendly and frank: How the UK can better engage with China
News

Confident, friendly and frank: How the UK can better engage with China

‘After the Golden Age, Resetting UK-China Engagement’ is a new report published by the British Foreign Policy Group, suggesting Britain needs to rethink its relationship with China in this new era. CBBC‘s Managing director Tom Simpson talks to its authors Rana Mitter and Sophia Gaston

What was the background that led to you and Sophia writing ‘After the Golden Age’?

Sophia took up the directorship of the British Foreign Policy Group think tank last year, and she has been taking a long hard look at all aspects of the UK’s foreign policy.  I have served for the past seven years as director of Oxford University’s China Centre, the largest single academic centre for the study of China in Europe.

As UK-China relations have become more heated over the past half year or so, Sophia and I had conversations that convinced us both that there was a need for detailed consideration of what precisely the nature of UK-China relations was going to be – not just in the next few months, but for years to come. Analogies and descriptions, including “new cold war” or “golden era” don’t really help much; they are a shorthand, rather than an explanation. We were prompted by the thought that, rather than trying to find a convenient shorthand to describe UK-China relations – a shorthand that doesn’t really exist – we would stress the importance of thinking carefully about what the UK really wants from a relationship with China.

For those who have not yet read the report, what does a post-golden age UK-China relationship look like (assuming the UK takes your recommended course of action)?

We use the phrase “confident, friendly and frank” to describe it. This describes an attitude, rather than a specific policy (although we do suggest plenty of those). Confident because we both believe the UK has a huge amount to offer not just China, but the wider world. In terms of specifics, it has globally-admired sectors including high-tech, higher education, creative industries and finance (and I’ve left out plenty there). More than that, it’s still recognised that the UK, despite political turmoil, is a liberal-minded and open country, and we know that’s one of the qualities that brings thousands of Chinese visitors here for study, business and leisure, and which produces sectors that are the envy of the world (including China) such as trusted global media brands. So we should never be shy about feeling proud of those things. That confidence would then help us to develop a conversation with China that is friendly, calm, and cool-headed.

Both sides have been quite fiery in their rhetoric recently, but real dialogue, particularly behind the scenes, needs both sides at least to be willing to speak in good faith and understand where the other side is coming from. But let’s not confuse friendliness with avoiding difficult issues. That’s why frankness is also important. For instance, recently, public opinion in Britain has shown there is deep concern about the Hong Kong national security law and the effects it will have on freedoms in that territory, as well as the extraterritorial effects of the law that threaten to criminalise speech by people located outside Chinese territory.

It’s also clear that the British public finds reports on the re-education camps in Xinjiang deeply disturbing and wants a lot more transparency on what is going on there. Real friends don’t simply tell each other what the other side wants to hear, and a UK-China relationship of any depth will have to have arenas where both sides can be very honest about where they have major differences. 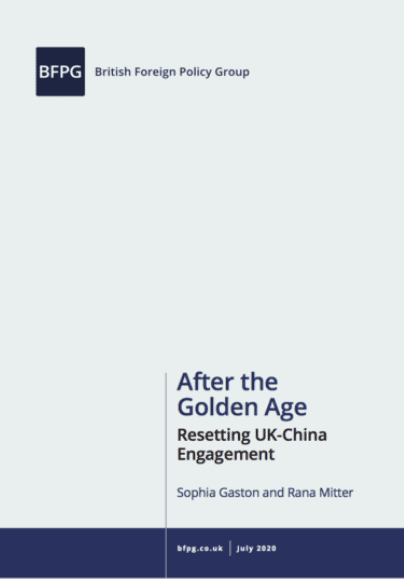 We think that Britain needs to become more more “China-ready”. We suggest that the UK should invest heavily in building the knowledge and experience base regarding China within the UK civil service, and assist British businesses to become better prepared to engage with China’s business culture. Those of us who are already China specialists should work to enhance knowledge of China within the UK as a whole, investing in language training, and knowledge of politics, society, culture and history. Existing initiatives exist to encourage Mandarin language and Chinese studies knowledge in the school and university sectors, but they are still relatively small-scale, and have often been short-term. We should support long-term growth of China Studies knowledge for the longer term.

We should support long-term growth of China Studies knowledge for the longer term.

We should make it clear that the aim of such work is to make Britain more aware of its own values, and how to stand up for them. We applaud the idea of Britain being a “liberal persuader” in the world, but to do so in conversation with China, our culture needs to understand our interlocutor a lot better.

In the report, you talk of reconfiguring our relationships with our most enduring allies. How do you see this reconfiguring working in practice?

The UK has left the EU, and is currently thinking about the granular details of how it will enact the “Global Britain” agenda, which the government is advocating. At the moment, there is a major Integrated Review of the UK’s defence and foreign policy, which is looking at all aspects of our country’s foreign relations. The defence element is of course very important, and there is room for a rethink on relations with the United States (still dependent on who wins the November election), and with our European friends and partners who remain close to us in geography and temperament.

But our report makes it clear that the UK has alliances and partnerships that go beyond the military.  For years, DFID has been one of the agencies of UK power that was most admired and respected globally, not least by China. We advocate strongly that as DFID’s functions are folded into the Foreign Office, the UK should seek to maintain and grow the strong sense of international goodwill and good practice that has become associated with the department and with the UK more broadly speaking.

We advocate strongly that as DFID’s functions are folded into the Foreign Office, the UK should seek to maintain and grow a strong sense of international goodwill

What role do you see for British companies in helping to chart a successful course for UK-China relations?

There’s a huge and very positive role for the UK’s business sector in developing relations between the two countries, and in a whole range of areas. From financial and legal services, to pharmaceuticals and precision machinery, there is clearly synergy between the two. Institutions such as the China-Britain Business Council play a crucial role in mediating this relationship, and are central to the aim of creating that confident, friendly and frank relationship that we advocate.

Institutions such as the China-Britain Business Council play a crucial role in mediating the relationship and are central to the aim of creating that confident, friendly and frank relationship that we advocate.

The challenge for UK business now is to find areas where it can gain market access in China without making itself vulnerable, for instance in areas such as intellectual property. The reality is that doing business with China is different from doing it with liberalised market economies. That doesn’t mean it’s impossible, or anything close to it; but it means that both sides, Chinese and British, need to go into it with eyes wide open and a willingness to understand what the expectations and constraints are on both sides. British business will also have to become more vocal about what it wants from the relationship, particularly on access to China’s growing market for services.

Lastly, how do you see relations between the UK and China playing out over the next decade?

The UK and China will have very different sorts of political and social systems for a very long time, but that doesn’t mean that the two sides can’t find areas of engagement and consensus. The COVID pandemic has driven climate change off the front pages, but the issue has not gone away and the UK and China will need to cooperate as part of the global effort to contain the climate emergency.

We hope that the UK and China will have a strong and realistic relationship with each other, with a sense of how to appreciate what is positive about the other, while not shying away from issues where there is profound difference. China has moved in forty years from being an impoverished agrarian state to a technological and economic superpower. That’s a major achievement that the wider world could and should acknowledge more often, along with the improvements that Chinese investment has made in many (though not all) parts of the Global South. But the UK has also done a huge amount to promote liberal values in media, education and law that the world has valued too, including values of dissent, debate and argument; there’s a reason that there is such a strong Chinese interest in doing business or being educated here. We should be proud of our core values and never apologise for advocating them around the world.

Read the full BFPG report “After the Golden Age”

Tom Simpson is CBBC's Managing Director, China. He can be reached at tom.simpson@cbbc.org.cn

Why Jiangsu should be a key...