It is being developed to alleviate the pressure from China’s capital and absorb it into the broader area of Jing-Jin-Ji – the region that includes Beijing, Tianjin and Hebei. Jing-Jin-Ji is the northern metropolitan area that rivals the Pearl River Delta in the south or the Yangtze River Delta in the centre of China.

The aim of the development is to ensure various industries are situated in the most suitable areas. Beijing will remain the political capital, Tianjin a logistics centre and Hebei will focus more on heavy industry. The plan is to minimise duplication and increase efficiencies, whilst reducing pressure on transport, housing and the environment.

As China goes through a critically important transition phase, the development of Xiong’an aims to focus on innovation, helping China escape the middle-income trap – a term developed by the World Bank to describe those nations that get stuck at a middle level of economic development – by leapfrogging into high-tech, high-quality production.

In June 2017, Xi Jinping stated that while Beijing should remain the centre of national politics, culture, international exchange and scientific innovation, all other ‘non-capital functions’ should be moved elsewhere, to other regional locations like Xiong’an. High-tech enterprises and innovation hubs in Zhongguancun, one of China’s foremost innovation centres, will also be encouraged to move to Xiong’an.

Xi has promoted a number of experienced officials to the region. Notably, Xu Qin (mayor of Shenzhen 2010 to 2017) was parachuted in as the new governor of Hebei, whilst Chen Gang, a technocrat who oversaw Beijing’s high-tech industries, became the first head of the Xiong’an New Area.

The area will be designed to feature large green spaces and narrower streets, creating a more resident-friendly urban landscape than Beijing’s grand multi-lane boulevards. British companies Arup and Foster and Partners have both been shortlisted for designing the urban plan and Canary Wharf has been working closely with Xiong’an on its New Area Finance Technology Zone.

From Pilot Zone to New Area

Xiong’an Administration Committee is creating a pilot zone that will showcase technological targets for building a green and energy efficient environment. The pilot zone will be built with a high resilience to the effects of climate change and has already undergone building information modelling, the creation of an underground utility tunnel, the establishment of prefabricated buildings, different sponge city technologies and green traffic designing. Forestation of the region has also already commenced.

The pilot zone will remain for another 8 to 10 years before making way for the larger city, which aims to be complete by 2035. Plans to make the new area smart include using the latest facial recognition technology and big data applications.

Major technology companies including Baidu and Alibaba have already set up offices in the area, and Alicloud (Albaba’s cloud computing division) have signed a Memorandum of Understanding with the New Area Group. According to a 2017 study by Morgan Stanley, the region will draw as much as RMB 2.4 trillion (£185 billion) in investment.

As an ‘international city’, the government has declared that it will be open to any advanced technological company or high-level supplier from any nation. 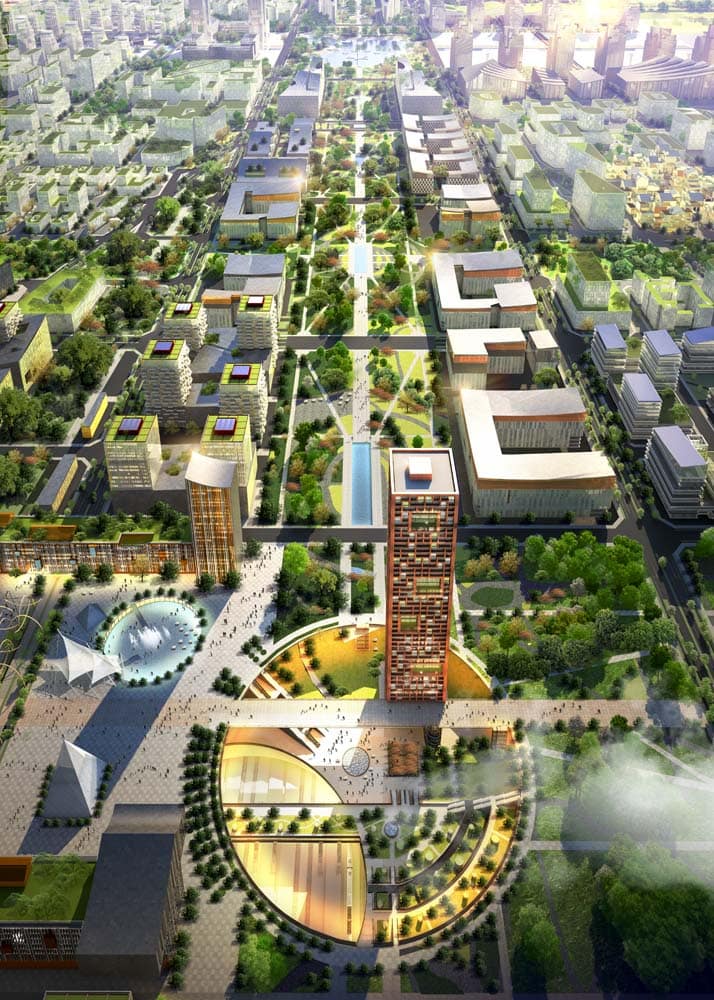 One key difference between Xiong’an and the other special economic areas like Shenzhen and Pudong is a ban on real estate trading. All housing in Xiong’an will be state-owned and provided to authorised workers and employees at subsidised rates. Furthermore, Xiong’an will only host technology innovation firms. Factories with high carbon emissions will be banned or highly restricted.

In April this year, planning guidelines for Xiong’an were released that will guide the development of Xiong’an until 2035 and envision its long-term progress until the middle of this century. These are aligned with Xi’s timelines for modernisation goals nationally. Key elements of the guidelines include: an ecological vision that is harmonious for both humans and the wider ecosystem, with green space outweighing development space in a 70:30 ratio; strong transport links that pioneer the latest in environmental and technological innovations; and prioritised industries such as green agriculture, IT and life and biological sciences.

Photographer Adrian Bradshaw exhibits his new works from the 1980s