COP26: Will China lead the world in industrial decarbonisation?

In the third article of our COP26 series, we look at how China has the potential to take the lead in cost-effective, scalable solutions to help decarbonise industrial sectors, based on insights from engineering firm Wood

As the eyes of the world turn towards Glasgow, the momentum behind the net zero agenda continues to gather pace. The recent IPCC report, which signalled ‘a code red for humanity,’ underlined the pressing need to move beyond just setting net zero commitments and instead taking concrete actions that drive near-term reductions in carbon emissions.

There’s no doubt that COP26 is being viewed as a bellwether moment. Agreements struck in Glasgow will determine if the world can get on track with the goals set out in the Paris Agreement and avoid the most catastrophic impacts of climate change. And while the scale of the challenge means every country across the globe has a role to play, how large and rapidly growing economies in Asia (China, India and Indonesia) evolve over the next decade will have a particularly significant bearing on whether the promise of a net zero future can be realised.

China’s role at the heart of decarbonisation

China is a particularly interesting case. It’s the world’s largest single emitter of CO2 (albeit not on a per capita basis) and was responsible for 28% of global CO2 emissions in 2020. The country remains heavily reliant on hydrocarbons as a primary energy source, including coal, and its Nationally Determined Contribution (NDC) rating is still inconsistent with holding global warming to well below 2℃.

Given the scale of these figures, it’s clear that any progress that China makes on its own decarbonisation agenda will have a major bearing on global progress. Encouragingly, in late 2020, China committed to binding targets when President Xi set dual goals to achieve peak carbon by 2030 and become carbon neutral by 2060.

Furthermore, in the latest five-year plan (FYP) issued earlier this year, the Chinese leadership set additional targets including a goal to reduce carbon intensity by 18% by 2025 and establish ‘a modern energy system’, including a goal to increase non-fossil fuel primary energy usage to 20% in the same window.

China’s industrial sectors merit particular focus. Over the last 30 years, industrial heartlands like Huizhou, Ningdong, Yulin and Ningbo have all played a central role in powering China’s impressive growth story. They remain an important part of the economy today, but the long-term future of industrial clusters across the country will be predicated on delivering the same output with a much-reduced environmental impact.

Take China’s steel industry as an example. The sector accounts for 15% of the country’s total carbon emissions and 60% of global steel sector emissions. Earlier this year, in the city of Tangshan in Hebei province, authorities gave 23 steelmakers a clear choice: cut CO2 emissions or cut production. Increasingly, this will be the choice facing not just steel producers, but companies in other industrial markets including refining, chemicals and manufacturing.

Earlier this year, in the city of Tangshan in Hebei province, authorities gave 23 steelmakers a clear choice: cut CO2 emissions or cut production. Increasingly, this will be the choice facing not just steel producers, but companies in other industrial markets

Recent data from IRENA outlines the scale of the transformation required. By 2050, China must reduce annual industrial emissions by over a third, driving a reduction from 4.5GT to 3GT of CO2 emissions per annum. Companies like Baowu Steel Group and Sinopec are responding to this challenge by setting their own goals, in this case, a target to become carbon neutral by 2050, and many more will follow suit over the coming years as part of a decade of climate action.

Across many countries, including China, the near-term pathways to decarbonise industrial activity are not yet clear. While decarbonisation is clearly a business imperative for companies operating in industrial sectors, developing a credible roadmap towards Net Zero is a hugely complex challenge that requires multiple levers to be pulled as part of a blended solution.

Engineering and consulting firm Wood is helping clients to tackle this very problem using its proprietary Decarbonisation SCORE methodology. SCORE is a structured and dynamic process that pinpoints key business drivers, sets targets, maps assets, and identifies the right mix of solutions that can ultimately deliver against emissions goals.

The process can be applied to single or multiple assets, to a portfolio or across a specific geography or region. Given that industrial facilities in China can operate as stand-alone assets, as part of a cluster, or in some cases, as part of an ‘industrial city’, this optionality is key. Here’s what SCORE stands for: 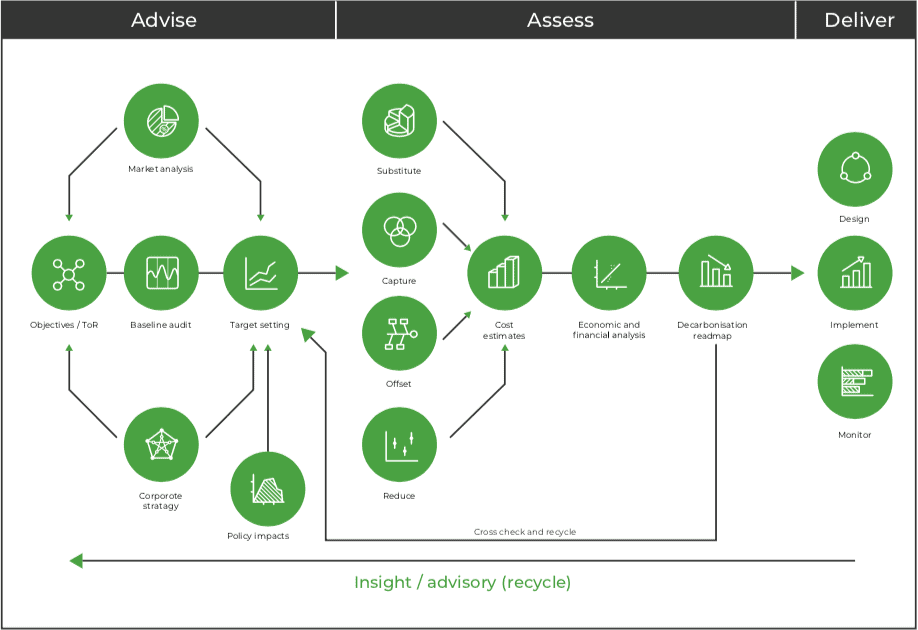 SUBSTITUTE
Switch fuel or feedstocks to renewable or less carbon-intensive sources. Two good examples here are switching electricity provision to a renewable source like wind power, or considering the use of renewable and bio feedstocks. In Harlow, Essex, specialist data centre Kao Data took the initial steps towards achieving its own net zero ambitions when it became the UK’s first data centre to transition all its backup generators to HVO (Hydrotreated Vegetable Oil) fuel in July 2021.

OFFSET
Consider assets or product portfolios on a country or company-wide scale and explore opportunities to compensate in other areas for the carbon emissions that cannot be easily removed. Offset solutions can divide opinion but in our experience, they provide important flexibility particularly in industrial sectors where some emissions are more challenging to address.

REDUCE
Adopt a holistic approach to asset optimisation including energy efficiency, digitalisation and smart maintenance strategies to avoid potential emissions at source. Some of these represent ‘quick win’ opportunities while other steps will involve more comprehensive asset repurposing.

Earlier this year, China officially launched its national carbon emission trading scheme (ETS). It demonstrates China’s commitment to climate action and, given that the country is the largest carbon market in the world by volume, it has the potential to be transformative. As new regulations come into force and markets for offsetting and trading emerge, data quality and auditability will be key, from basic operations all the way through to strategy definition.

Wood deploys a real-time emissions monitoring and management tool called ENVision to provide high frequency, streamlined and automated data on emissions profile and regulatory calculations. The ability to derive insight is predicated on having access to quality data and this will be increasingly important in achieving emissions reductions and net zero targets.

Given the scale and complexity of the China market, it is vital that industrial clients track their real-time emissions footprint and performance metrics so that a clear, auditable and accurate view of emissions can be presented to regulators, operators and stakeholders.

An opportunity to lead the world

Given the vast scale of its industrial footprint, it also has a tremendous opportunity to lead the way in the development of cost-effective, scalable solutions to help decarbonise industrial sectors. Market analysis shows that many of the technologies required to deliver a net zero world still cost a premium. However, as these technologies are scaled, there are significant cost reduction opportunities. In this respect, China has a natural advantage over other markets. The volume of industrial cluster developments across the country means China can create a domestic market, learn at home and then take this expertise across Asia and to the rest of the world.

The level of investment being made in energy transition technologies across China highlights the opportunity here. Within the carbon capture and storage space there is real momentum, with IHS Markit data indicating China could add eight more large-scale CCUS projects by 2025. This is only going to grow, with BCG analysis suggesting that 100% adoption of CCS technology will be required for in-house power generation and heat production if China’s industries are to align with a Net Zero future.

Investment in hydrogen technology is also accelerating – the country will account for two-thirds of the world’s electrolysers by the end of 2022, and more than 20 provinces and 40 cities in China have published development plans worth trillions of yuan for new hydrogen energy facilities.

Another area where China has a competitive advantage is around its research and development programme. The country is investing heavily in both ‘new’ innovation and in scaling some of the existing technologies that will need to be much more widely adopted to deliver a low-carbon future. 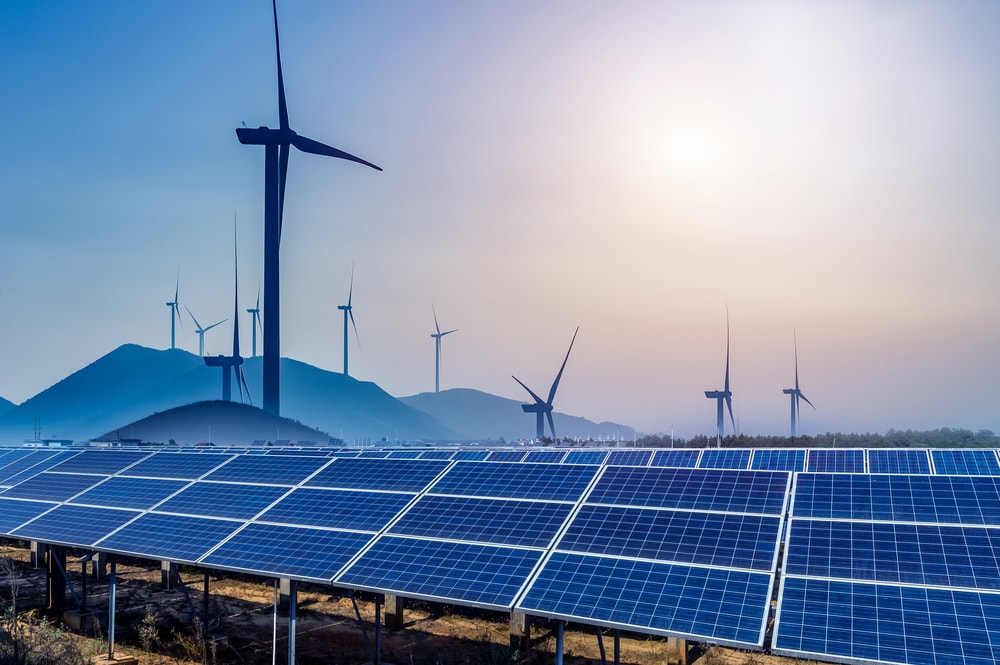 Collaboration opportunities for the UK and China

Our work on Humber Zero to create a zero-carbon industrial cluster is a great example of industrial decarbonisation in action. Covering multiple assets including refineries, power plants and pipeline infrastructure, the decarbonisation solutions being applied on the project include green hydrogen via electrolysis, blue hydrogen via advanced steam methane reforming, post-combustion carbon capture on combined cycle gas turbines, steam boilers and refinery process units, as well as energy efficiency improvements across the various assets.

In total, the decarbonisation masterplan will help to save over 8 million tonnes of CO2 per annum, as well as creating a sustainable platform for industrial growth, economic development and new job opportunities.

While this is a best-in-class example of a project of this nature, the size of the UK means there are a limited number of projects of this scale that will be commissioned. In a market like China, there’s a much larger canvas to work on. This presents an opportunity to embrace some of the early lessons that emerge from major programmes like the Northern Endurance Partnership on Teesside or Zero Carbon Humber and use this to shape their own net zero industrial revolution across the country.

Now with another intensive round of climate negotiations complete, a global mindset and collaborative spirit that has long characterised UK-Sino relations will be key to securing the collective commitments required to help bring to life the promise of a net zero future.

COP26: How emerging technologies are paving the way to greener energy