Home Economy Why do more than 50% of British imports go to Beijing and Shanghai?
Economy

Why do more than 50% of British imports go to Beijing and Shanghai?

In 2021, China recorded a historical trade surplus of £500 billion. But trade balances vary across regions, with trade surpluses and minuses highly concentrated in a few provinces, writes Torsten Weller

China has long been seen as the ‘workshop of the world.’ This ‘moniker’ has become even more justified during the Covid-19 pandemic, when most developed economies in the West shut down during lengthy lockdowns. Factory closures in other export-oriented economies like Vietnam and Bangladesh and increased spending by Western consumers have pushed Chinese exports to record levels. Last year, the country recorded a trade surplus of around USD US$ 676.4 (£500 billion), the highest China – and possibly any country – has ever reached, ever.

That said, although China’s national account numbers look impressive and are good news for foreign businesses, regional statistics reveal a more complex picture. In fact, China’s external trade remains highly concentrated in only a few provinces which account for the majority of both exports and imports. The high concentration of Chinese export industries – although not unusual – raises questions nonetheless over whether a rebalancing, as envisaged by Beijing’s ‘Dual Circulation Strategy’, can easily be implemented.

China’s economy has always been characterised by stark geographical differences, with Southeastern coastal provinces and Tier-One cities outperforming landlocked Western areas. Trade data reflects this divergence, although in a nonlinear way. Yes, wealthier provinces maintained larger trade surpluses in 2021 than poorer ones, but the wealthiest cities – Beijing and Shanghai – also ran the largest trade deficits with an accumulated minus of nearly USD400 billion.

On the surplus side, four provinces – Zhejiang, Guangdong, Shandong and Jiangsu – accounted for over 73% of China’s trade surplus alone, exporting together US$ 808.5 billion more than they imported from abroad. For comparison, Japan’s goods export in 2020 were only US$ 641.3 billion, over 20% less than the trade surplus of these four Chinese regions.

Looking at historical data, it also becomes clear that this gap is getting bigger. Over the last ten years, trade surpluses in the three export hubs Guangdong, Jiangsu, Zhejiang and Shandong have continued to increase, whereas deficits in Shanghai and Beijing have widened. The remaining 25 Mainland provinces, on the other hand, kept their trade balance relatively stable. The accumulated trade surplus of these regions increased by only US$ 6.5 billion between 2010 and 2021. 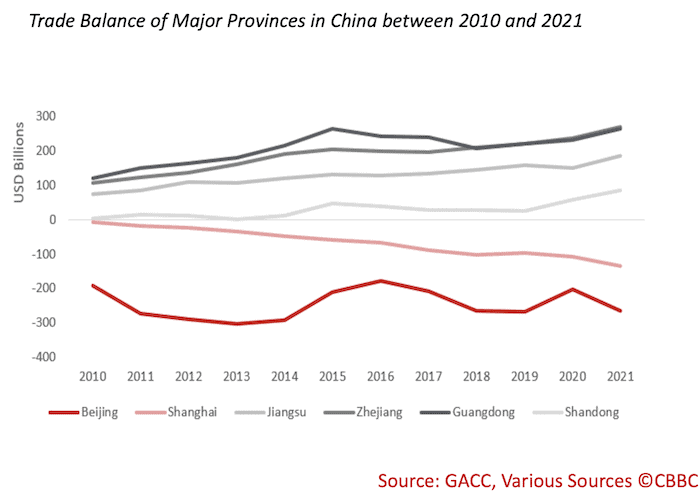 Who benefits from Chinese Exports?

Although a growing number of foreign companies are now manufacturing in China for Chinese customers, exports remain an important source of revenue for MNCs. According to data from Chinese customs, exports of foreign-invested enterprises (FIE) in China had a value of USD1.2 trillion in 2021, up 23.3% from 2020. For comparison, China-based FIEs exported nearly twice as many goods as Japan in 2020 and almost as much as Germany, the world’s third-largest goods exporter.

Although the overall share of FIEs in Chinese exports has declined from 46% in 2018 to 33% in 2021, foreign investment still benefited from the country’s export boom. Exports from foreign-invested companies outpaced overall export growth in 14 out of 31 provinces. Only in three regions – Qinghai, Heilongjiang and Xinjiang – did exports from foreign-invested businesses decline.

Interestingly, China’s record trade surplus in 2021 does not mean that imports declined. Quite the opposite, imports increased in all provinces bar Xinjiang, where purchases from abroad decreased by 20.3% year-on-year. This is a notable change compared to last year, when imports dropped in thirteen provinces compared to 2019.

Although imports grew fastest in poorer provinces such as Hainan (+73.6%), Shanxi (+56.3%) and Heilongjiang (+54.2%), most imports still went to the six provinces with the biggest trade imbalances. Together, Beijing, Shanghai, Guangdong, Zhejiang, Jiangsu, and Shandong accounted for 68% of Chinese import growth last year, buying an additional US$ 317 billion in foreign goods – nearly the equivalent of all Spanish goods imports in 2020. 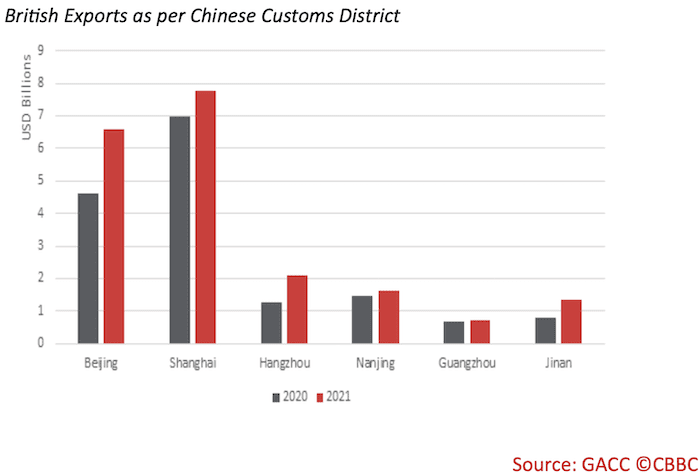 British exports to China were worth US$ 25.6 billion (£19 billion) according to Chinese customs data. It’s worth pointing out that these figures are generally higher than those recorded by the export country as they also include re-exports from other regions, such as Hong Kong. As an illustration, available ONS figures for the first eleven months of 2021 set UK exports to China at a combined £16.5 billion versus £17.2 billion recorded by the Chinese side.

While country-by-country data is currently only available from local customs bureaus – China has 46 custom districts, whose borders do not always align with provincial boundaries – the figures from the six major largest import regions paint a positive image. British imports recorded by the customs bureaus in Beijing, Shanghai, Hangzhou (Zhejiang), Nanjing (Jiangsu), Guangzhou (Guangdong), and Jinan (Shandong), accounted for 78.5% of all British exports to China.

Beijing and Shanghai remain the two largest destinations for British goods. Over half of British exports last year were shipped to these two cities. But the UK also benefited from China’s own export growth. Thus, UK goods sales to Zhenjiang and Shandong increased by 65.1% and 67.3% respectively. Exports to China’s largest export region, Guangdong, on the other hand, remained flat, growing only 3% compared to 2020.

Chinese foreign trade is highly concentrated in only a few regions. Six provinces – Beijing, Shanghai, Guangdong, Jiangsu, Zhejiang and Shandong – account for the overwhelming majority of both Chinese imports and exports. These regions also host the numerous foreign-owned and foreign-invested companies which also benefit from China’s growing trade volume – sometimes more than domestic ones. This is an important feature of China’s industrial landscape and its role as both a market and an industrial export hub needs to be taken into consideration when discussing China’s huge trade imbalances.

Nonetheless, the overwhelming dominance of geographical clusters in China’s foreign trade – and thus economic growth – raises some serious questions about the future of Chinese economic development. Policymakers will find it hard to implement recent policy initiatives such as the ‘Dual Circulation Strategy’ – which aims for a more balanced trade – and ‘Common Prosperity’, which wants to distribute wealth more evenly, without risking major disruptions of China’s current business and trading networks. They might well discover that sometimes, geography can be destiny.

Why Eileen Gu was the real winner of Beijing 2022