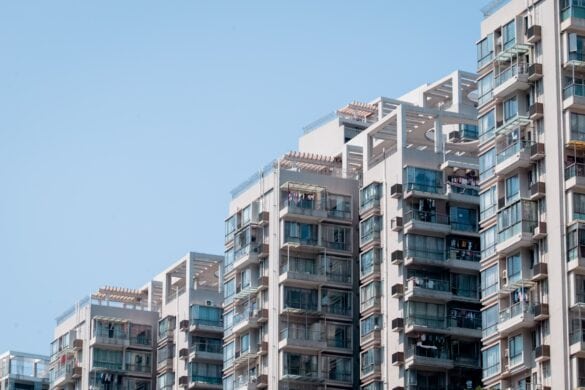 What is happening in China’s real estate sector? It used to be a key driver of the economy, but the tide has turned and now it’s starting to drag. Failure to regulate the sector in boom has left the country with limited options in bust, and as a result, UK companies are beginning to be impacted because Chinese partners are defaulting on their payments due to cash flow issues, writes Joe Cash

China’s property market accounts for around 25% of GDP. Analysts widely assumed that this, therefore, makes the sector too big to fail. They might be about to be proven wrong. The property market has contracted by as much as 7% year on year, causing real estate to have become a significant drag on the Chinese economy. Following the struggles of Evergrande, China’s second-largest property developer, late last year, more real estate companies have come to be swallowed by their ballooning debt. The co-chairwoman of Country Garden, another massive developer, has lost as much as £10 billion from her personal fortune in the last 12 months. The result is that developers are no longer building homes, buyers have started to hold off on paying their mortgages or entering the market, and the system has run out of capital.

China’s real estate sector might be seen as a bit of a Ponzi scheme. The developers rake in hordes of cash from existing customers for properties that have not yet been built and then use that cash to fund the construction of homes for new customers, which is fine, assuming that confidence is high and all the cogs are turning. Should investors in the developer companies lose faith in their debt management, however, or the economic environment takes a turn for the worse, the model then starts to come under considerable strain. Real estate is also incredibly pro-cyclical: everything good feeds on itself in the boom, and everything bad feeds on itself in the downtime.

Worse, there is little incentive to regulate the real estate sector in good times. High sales come with high demand and high borrowing, meaning that Chinese consumers, the banks, the developers, and, to a certain extent, the government, are all happy. Indeed, the only incentive to regulate during a boom is to reduce the damage a likely bust will bring. The Chinese government sought to introduce closer regulation last year when it implemented a “three red lines” policy to restore the real estate sector, but it has not been particularly effective — at least not yet.

More than 90% of properties sold in China in 2020 were off-plan, but the completion rate was just 60%. Predominantly middle-class mortgage holders are starting to complain. Furthermore, the real estate market is not struggling due to financial pressure on homeowners — it is the developers who are under the cosh. That is an awkward state of affairs for the Chinese government in a politically sensitive year in which President Xi will likely secure a third, unprecedented term. Middle-class mortgage holders could start to wonder whether the government, the regulators, and the state-owned banks that drive much of the country’s real estate activity, can actually deliver the better life they have promised.

What are the options for the Chinese government?

Failure to regulate the industry sufficiently while it was booming has left regulators in an impossible position. Stepping in to pay people’s mortgages will only encourage more people to default on their loans. That could be very costly, stretching well into hundreds of billions of dollars. But bailing out the developers will only encourage them to continue the practice, which in Tibet, Qinghai and Guizhou is so severe that developers start six houses for every completed property.

Covid is exacerbating the situation as lockdowns deter potential buyers from visiting and putting down an offer on properties, whilst mortgage payers still have to pay mortgages even if they have lost their jobs or experienced pay cuts. Unemployment is currently running at 6.1%, just shy of the 6.2% recorded at the start of the pandemic. It is plausible that the situation will improve after the Party Congress. The government could then begin to take bolder steps in rebooting the sector, which is not without risk as lots of people could lose a lot of money, or relax Covid restrictions, increasing consumer confidence. With state-owned money covering over so many cracks, not just in the real estate sector, however, it is hard to see how state intervention can be dialled down without triggering some inflation or social unrest.

Beijing has announced plans to revive millions of stalled property developments by issuing loans worth up to £120 billion at rates of around 1.75% per year to plug the shortfall. It seems unlikely to work. Not only is such a figure a drop in the ocean, but it might also be considered a rather dubious use of public funds, taking into account that many of these unfinished apartments are in areas where people have no intention of living. The majority of potential buyers are seeking to move into the cities or generally eastward, but many of the apartments that developers have invested customer money into are located in western or northeastern China, where the local government has incentivised state-owned developers to revitalise the area, regardless of demand.

Ordos, in Inner Mongolia, is China’s most infamous ‘ghost town,’ but there are many others. Indeed, there is enough vacant housing in China to accommodate the entire population of Spain. That, in turn, puts pressure on prices, meaning that even if the government relaxed Covid restrictions and gave the property market the boost it needs, prices would probably not increase and provide the market with the greater liquidity that it needs.

Read Also
Can China really pull off Zero Covid and a stable economy?

UK companies have already been impacted negatively by the slowdown in China’s real estate market. The oft-cited 25 to 29% of GDP that the sector contributes to the total takes into account construction, servicing, retailing, commodities and miscellaneous material inputs — all of which British companies in China are well placed to provide. Indeed, CBBC has already heard from British firms that have contracts with Chinese developers who are experiencing financial difficulty and, therefore, have had to default on payment.

It is very likely that the regulators will get the current crisis under control; China’s property market is too big to fail. There are reports of the government instructing state-owned banks and the developers to come to some agreement under the direction of the Ministry of Housing and Urban-Rural Development. The problem is that this plan revolves around directing more state-owned money to solve the issue, which is not sustainable in the long term. Foreign creditors are not an option; they have already lost £10s of billions in Chinese real estate bonds, so, as the economist George Magnus argues, it will take a miracle to lure them back to China’s real estate market. Ambitious structural reforms concerning how the developers work with local government, state-owned banks, and their customers will be required, but the problem has become so severe that this is not without risk. A lot of people are going to have to lose a lot of money at some point in the near future. The question is who and what are the broader socio-economic repercussions of that.

Importing from China: How to ship products and navigate customs