When it comes to cross-cultural training days, Christian Havrehed did things differently. Rather than utilising a projector and a whiteboard, Havrehed decided the best way to really understand a person and their culture was to build a boat, find a Chinese friend and then row all the way to Barbados from China

Everyone believed such an off the wall cross-cultural project was doomed to fail, but they pulled it off. And now Havrehed’s getting back in the water to retrace the steps of China’s pre-Columbus voyages to the Americas. Originally from Denmark, Havrehed first visited China in 1989 and worked there for 20 years. What he learned along the way about cultural cooperation, teamwork in China and building lasting relationships is all in his newly updated memoir, ‘Beijing to Barbados in a Rowboat: The true story of how China and the West pulled together to row across the Atlantic’ (Impact Books). Paul French caught up with Christian on dry land…

Can you briefly explain what you set out to do on this incredible voyage?

Sun Haibin (Havrehead’s rowing partner) and I did the project in 2001, the year China joined the WTO. The Chinese economic miracle and massive poverty alleviation had not yet happened. The Western stereotype of a Chinese person then was a poor and backward factory worker turning out poor quality, low value-added products, with whom it was impossible to cooperate because the cultural and language difficulties were simply too big.

We wanted to challenge this stereotype and inspire Chinese and Westerners to think differently about each other. We wanted to showcase that Chinese-Western cooperation can succeed even in the most extreme circumstances, as long as there is a common vision and both sides are willing to trust in each other.

We also wanted to introduce the Western concepts of privately organised adventure sport to the Chinese, as well as private philanthropy, in order to create scholarships to send Chinese students to the United World College of the Atlantic in Wales, my alma mater. Such concepts were completely foreign to the Chinese at the time.

You had been living and working in China for many years before the voyage, what did you learn that you didn’t know before about culture clashes under stress?

Management guru Peter Drucker famously said: “Culture eats strategy for breakfast.” This is true. If you are not aligned on your goals, you won’t succeed, particularly in a cross-cultural endeavour. Often you think you are aligned, but you really are not. Things start to go South, frustration kicks in, stereotypes pop up, and both sides throw in the towel – because it is an option to throw in the towel. I actually think the culture clashes I experienced before (and after) the voyage were greater than during the project. Why? Because I could walk away and be peeved with the other side, whilst feeling sorry for myself. And the Chinese side could do the same.

Throwing in the towel when things got tough was not an option for us because it would have showcased to the world exactly what we set out to disprove. Sometimes we had to push hard, and I was often frustrated by the Chinese bureaucracy which, to me, made no sense, but underlying it there was always a good explanation and a workaround solution that enabled us to move forward. Clashes result in breakthroughs, and help build a strong common culture, provided everyone stays in the same boat. Is it possible to go through 56 days and 2,745 nautical miles in a small boat with someone and still be friends?

Absolutely! But it is not a guarantee. In our race across the Atlantic, a British husband and wife team ended up getting divorced and two British best friends since childhood fell out so badly that one asked the other the leave the boat. One of them told me later they ended up screaming at each other because there was no space to have a proper fight. In both cases, the fall out was due to assuming there was alignment and shared objectives when there was not.

Sun Haibin and I spent a lot of time before the race talking through what constituted success, what constituted failure, how much we could interfere in each other’s daily routines and under which scenarios we would consider giving up. We went through this effort because we expected we would see things differently since we come from vastly different cultures. This meant that we had pre-empted most arguments before setting off across that Atlantic. Still, we did manage to annoy each other on occasion due to deeply engrained cultural traits. But we never seriously fell out. We had a clear objective to still be friends on arrival in Barbados, and this we kept – even to this day!

Your voyage was 20 years ago now, yet you’ve decided to republish and add to your original story – what made you think of doing an update?

The first edition was published in English, Chinese and Danish. It has sold more than 20,000 copies but is now out of print. In recent years I have mainly sold the book in connection with corporate speaking engagements.

Last year it struck me that perhaps it was time for an updated edition. The Western media constantly writes negative stories about China and this rubs off on public opinion. Against this backdrop perhaps it is time to push a true story about why China and the West can cooperate and succeed together, in a light-hearted and entertaining manner, without being too political, one way or the other.

The updates serve to illustrate how much China has, and hasn’t, changed over the past 20 years, thereby helping the reader to get alternative insights into the amazing journey China and the Chinese people have been on and where the trajectory is heading. I am not sure all updates would cut the mustard with my old professors at Durham University where I did my degree in Chinese Language and Western Management studies, but I do not think they would laugh at them, either. 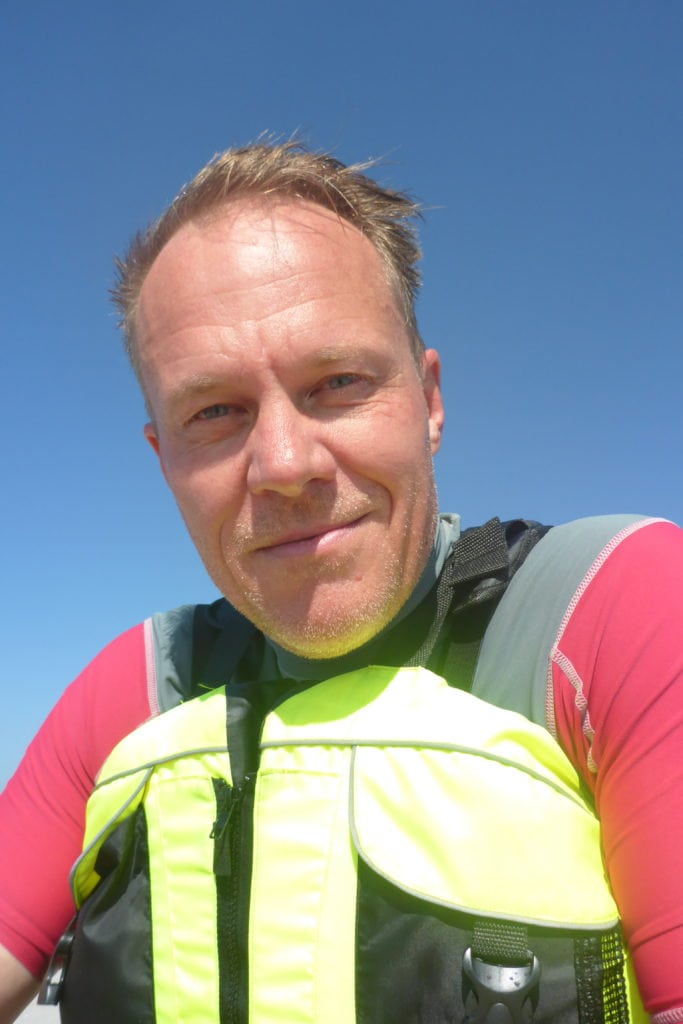 In the 20 years since the Beijing to Barbados adventure, do you think China and Europe have got better at understanding each other or are we still stuck at an impasse – are you a glass is half full or glass is half empty kind of guy on intercultural co-operation?

Things were heading in the right direction until about five years ago. Now we are experiencing a rough patch, and while I do not think we have hit the bottom yet, I still take a glass half full approach. There is more posturing to be done on both sides, but when both sides finally realise they cannot throw in the towel on each other since we are all in the same proverbial boat, things will change. At that point in time, our differences will likely become strengths – as long as there truly is a common vision and both sides are willing to trust in each other.

Until then, we have to rely on interest groups and NGOs like Engage with China, of which I am proud to be Adventure Ambassador, to promote intercultural co-operation and understanding.

What is your most recent project, Retracing Chinese visits to America pre-Columbus?

In 2001, I picked up Irish explorer Tim Severin’s book ‘The China Voyage,’ where he describes his 1993 attempt to re-enact a potential trans-Pacific voyage by the Chinese eunuch Xu Fu in 210BC using a bamboo raft. The raft broke up mid-Pacific.

It used to be an accepted fact that the Chinese had visited America pre-Columbus, until European sentiment turned against the Chinese about the time of the Opium Wars. Over the past years, I have slowly managed to get traction with academia and convince them my research is sound.

Xu Fu is a real historical figure with temples dedicated to him in Korea and Japan. Sun Haibin and I plan to row in Xu Fu’s wake from China, via Korea, to Japan, visiting his temples along the way. From Japan we will head up the Kuril Islands to Kamchatka, across the Aleutians to Alaska, and down to meso-America. It’s a Hansel and Gretel approach looking for breadcrumb proof of Chinese pre-Columbus presence along the way, and we only move further once we have found that. Whether this will take us all the way to America, time will tell. The project is described in detail on my website www.yantu.com.

How to prepare your logistics for Singles’ Day