The sharing economy – from cars to bikes to rooms

A boom in funding has led to an array of opportunities for sharing-economy companies but they come with their challenges, writes Kiko Yap

The sharing economy in China has boomed in the last 18 months. From bikes and cars to basketballs and umbrellas, start-ups have been tagging the phrase gongxiang – or “sharing” – to their company names, in a bid to get a slice of the ever-growing amount of funding from investors and venture capitalists.

Things started in 2013 when Uber, the ride-sharing app, launched in Beijing. Silicon Valley darlings Uber were adamant that they would be one of the few foreign tech companies to crack China and were off to a good start. Discounted fares for customers and high fees for drivers meant that they were winning the market share in China but losing a reported US $1 billion a year. However, it wasn’t long before they were muscled out by domestic rival Didi Chuxing.

Didi Chuxing is a joint venture between the ride-sharing companies of China’s two biggest tech firms Alibaba (Kuaidi Dache) and Tencent (Didi Dache). The financial might of these two companies, combined with local knowledge and political backing, left no room for Uber and in 2016 Uber China was sold to Didi Chuxing.

The American company Airbnb, which allows people to rent out their homes or spare rooms, has so far fared better in China by quietly entering through the back door. Homeowners started renting out rooms via the company as early as 2014 before the official launch in China last year.

The accommodation-sharing sector is mainly used by the post-1980’s generation in China with an estimated 35 million users. The growth in the sector is impressive – by 2016 turnover had already reached RMB 24.3 billion, a 131 percent increase on the previous year.

Unlike Uber, Airbnb is still active in China but it is competing against a growing number of local enterprises, including Tujia and Xiaozhu Duanzu, that run similar business models.

In October last year, Tujia consolidated its market lead by acquiring homestay businesses from Ctrip and Qunar. This came shortly after its purchase of the short-term rental platform Mayi. The strategic move strengthens Tujia’s position in the Chinese market, which has a market value of RMB 6.55 billion.

In a positive sign, the State Council recently released its grip on the grant of approvals for the accommodation-sharing sector. It is predicted that there will be a year-on-year increase of 50 percent for the next five years. The growth in this sector is mainly attributable to the growth in the tourism industry. Tourists who wish to experience something a little more personalised and dynamic tend to choose short-term rental from the sharing platforms instead of conventional hotels.

After the rapid success of the car and home-sharing economy, Chinese entrepreneurs have been looking to establish other companies that work in the sharing economy. One of the most visible is bike sharing. 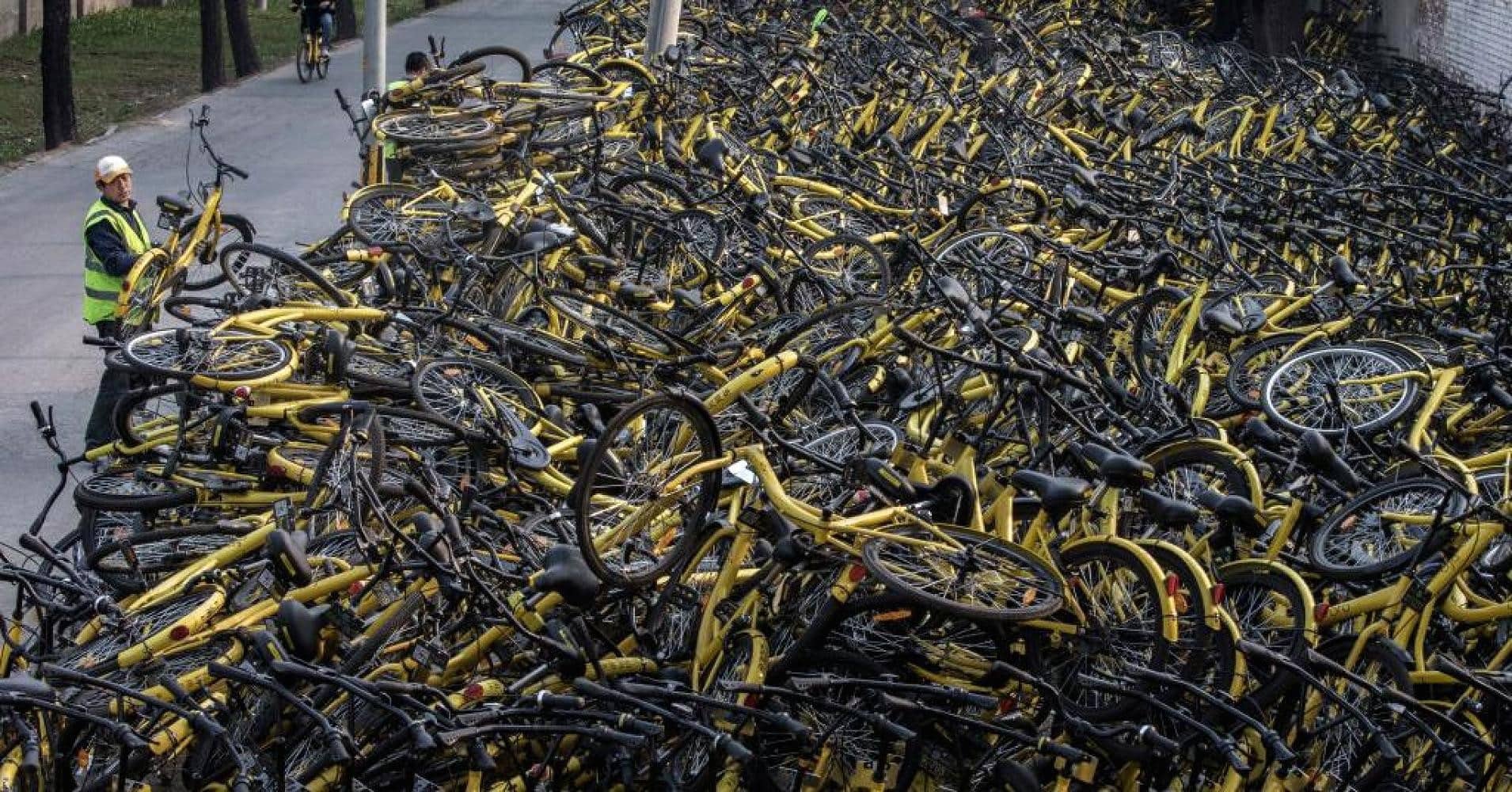 Cities across China have been flooded with bikes in the various hues of yellow, green or red representing the company that they belong to. Bikes can be collected at any number of points along the street, unlocked by scanning a QR code via and app and then deposited later at another location.

Although this model isn’t new (bike sharing in London was introduced by the then-mayor Boris Johnson in 2010), China has taken it to a new level. The two market leaders are Mobike and Ofo, who as of July 2017 had collectively raised a total of RMB 13 billion from investors. These two major players are vying for market dominance but there are dozens of other smaller companies grasping for a slice of a sector that has an estimated 4.96 million users.

The biggest concern among Chinese residents, however, is the increasingly congested pavements. Instead of collecting and depositing bikes at fixed docking stations as per the London model, the Chinese model allows bikes to be deposited anywhere and public anger is on the rise as bikes are dumped in incredible numbers, clogging streets and making the city unsightly. The environmental impact has also not gone unnoticed with China Cental Television estimating that bike sharing will lead to 300,000 tonnes of scrap metal.

Companies like Airbnb and Uber have succeeded internationally because they do embody the true principle of the shared economy. They utilise unused products by renting it out to others. However, according to Tan Jing, co-head of strategy for Uber China, many of these Chinese companies don’t truly belong in the sharing economy.

“The sharing economy is a trade-off between private individuals. It is a way to make the most of the social surplus,” she says. These new companies usually create and supply products to the public who will then pay a small amount to them via a platform (often mobile applications) for short-term rental. In a way, it has become a leasing model.

“Bike-sharing in China is not really sharing… and data capture is one of their key agendas,” says William Chou, the head of Deloitte’s telecoms, media and technology practice in China.

Although this “sharing culture” may seem distinct from other countries, the trend has become a key driver in the Chinese economy. China is now the largest sharing economy market in the world, with revenues of RMB 3.45 trillion last year, a year-on-year increase of 103 percent, according to the Development of the Sharing Economy 2017 Report. The sharing economy market currently accounts for 4.6 percent of its GDP and the figure is estimated to reach 20 percent by 2025.

Looking for the unicorn

Investors are looking for the next “unicorn” – a startup that has the potential to be the next big thing; the next Airbnb or Uber.

One of the key drivers behind the success of sharing economy in China is the common use of mobile payments. According to iResearch, the transaction volumes reached a mind-boggling RMB 59 trillion in 2016.

“The sharing economy is only as strong as it is in China due to cashless transactions,” said Andrew Atkinson, the marketing manager of China Skinny, a research agency.

Online and mobile payment systems in China are generally perceived to be safe and reliable with users relying heavily on WeChat or Alipay for their day-to-day transactions.

A younger generation of clients who value travel and experiences over products and cars are also more open to a shared economy but, at the same time, sharing assets is attractive to the more frugal older generation too.

Like in countries around the world, the Chinese government is trying to ensure that regulations around this new shared economy are standardised and implemented at the same rate as the technology advances. This is especially true when it involves integration and collaboration work across sectors and markets.

The same issues exist around the world, where policy-making lags behind technological disruption, especially when it comes to providing adequate social security in the case of freelancing or contracting jobs. Will criteria restrict certain people from participating in the economy and how will it be controlled, taxed, regulated and made safe?

China has experience in creating infrastructure but is unsure of how much of a role the state should play in these new business models. Registration of residents is required for stays of over 24 hours. How will home sharing affect this? Data collection and sharing with the state or other third parties means that there will have to be regulation to ensure the balance between data protection and freedom of information delicately.

The car-sharing sector in China is especially popular and is likely to continue to grow as China limits the number of cars on the roads and makes obtaining a license plate increasingly expensive. Not to mention the fact that many car owners actually prefer to be driven than drive themselves. Further services such as car washing, parking, chauffeuring and concierge services are also likely to be added. And further in the future, driverless cars will also fall under this umbrella. Although the authorities have looked at Didi Chuxing over antitrust issues due to their near-monopoly of 87 percent of the market, the government does support transport sharing as a way to curb transport congestion and pollution.

The rapid rise in the number of bike-sharing companies springing up across China has led to a ban this summer on the addition of new bikes to first and second tier cities. An oversupply of bikes and limited demand means this sector is less likely to see further growth, which has forced the two big players, Ofo and Mobike, to expand overseas.

This summer, Ofo launched in Cambridge with 100 bikes available to local users for 50p for half an hour. The company now has bikes in Singapore, the United States, Kazakhstan, Thailand, Malaysia, and Japan and aims for operations in 20 countries by the end of the year. Furthermore, Mobike launched in Manchester this summer, with around 1,000 bikes available for hire.

The UK is an early adopter of the sharing economy and is by far the fastest growing sharing economy in Europe. It is estimated by PwC that the sector could reach RMB 1.19 trillion by 2025, up from RMB 110 billion in 2016.

Video: How to tap into China’s love...