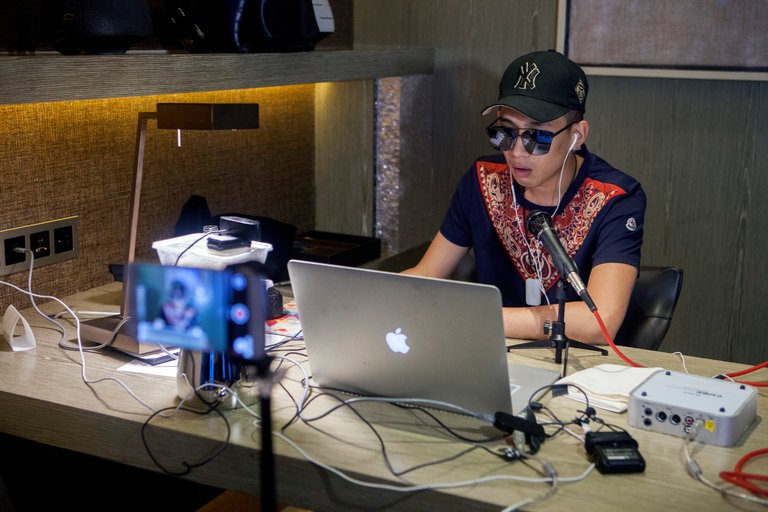 ‘Influencers’ are people who have wide followings on social media platforms like Instagram or YouTube. They are people who can make serious money from posting branded content to their legions of followers. The majority are pop stars, reality TV personalities or supermodels, and brands pay thousands of dollars for them to showcase their products. The more followers they have, the more they can charge the brand.

Taylor Swift, Kim Kardashian or Beyoncé are household names who have dominated screens on and off social media for many years now. But how many people have heard of Li Tianyou? What about Yu Li or Wei Liuyuan? These are China’s wanghong, the country’s own internet celebrities.

China’s wanghong don’t having armies of stylists, personal assistants and photographers who ensure their images are carefully curated; these internet personalities livestream from their own bedrooms.

Wei Liuyuan, who goes by the name Qing Wu on social app Momo, has managed to attract over a million followers by performing exotic pole dancing. However, the rising stars today are young men from China’s rural north east whose social commentary attracts audiences of tens of millions.

China’s live-stream market was worth at least $3 billion in 2016, up 180 percent on the previous year

Li Tianyou has more than 22 million fans that tune into his live streaming platform, on app YY. Described by the New York Times as “a hero to a generation of disaffected young people in China’s smaller cities and rural areas. Many of them are spiteful toward elites, sceptical of authority and eager for an escape from menial work,” they attribute his success to “his crude jokes and rat-a-tat riffs on modern life”.

Li, who is the son of a cattle farmer uses a style known as hanmai, or “microphone shouting.” It’s a rap-like performance that is popular amongst more rural communities, and is a modern take on the traditional Chinese performance of crosstalk. His work, he told the Times, “speaks to Chinese people who come from common families, or even from poor families.”

Yu Li, who goes by the name Brother Li, also spends hours a day broadcasting hanmai on a social network YY. He earns more than $100,000 a month.

Whilst brands pay western celebrities to endorse their products – be that staying at their hotels, driving their cars or wearing their clothes, in China it is the individual fans rather than brands who are paying to watch their idols.

Fans offer virtual gifts – for example teddy bears or perfume – that represent real money but often cost less than a dollar. Think of it as a virtual tip. Or perhaps slipping a note into the thong of a stripper.  Those wanting to show off their wealthy status might offer more money to ensure their name flashes on to the screen. Pay enough and the star might give you a “shout out” mentioning your name to all his fans. You can pay to be a VIP in his chat room.  Whilst dancer Wei made 2.5 million yuan from these online gifts, Li Tianyou earns more than $2m a year.

China’s live-stream market was worth at least $3 billion in 2016, up 180 percent on the previous year, according to iResearch. The sector will soon generate more money than the Chinese movie box office, analysts predict.

This has not gone unnoticed by authorities. According to official data, over 344 million people use one of China’s 150 live-streaming apps. In late 2016 a formal set of regulations were implemented, imposing stricter controls on these apps, forbidding sexual content and news reporting during live-streams.

China has been leading the way in micro-payments for some time and as people continue to look for more authentic content rather than bland, corporate branded messages, western social media stars may also start to look to this as a means of income.