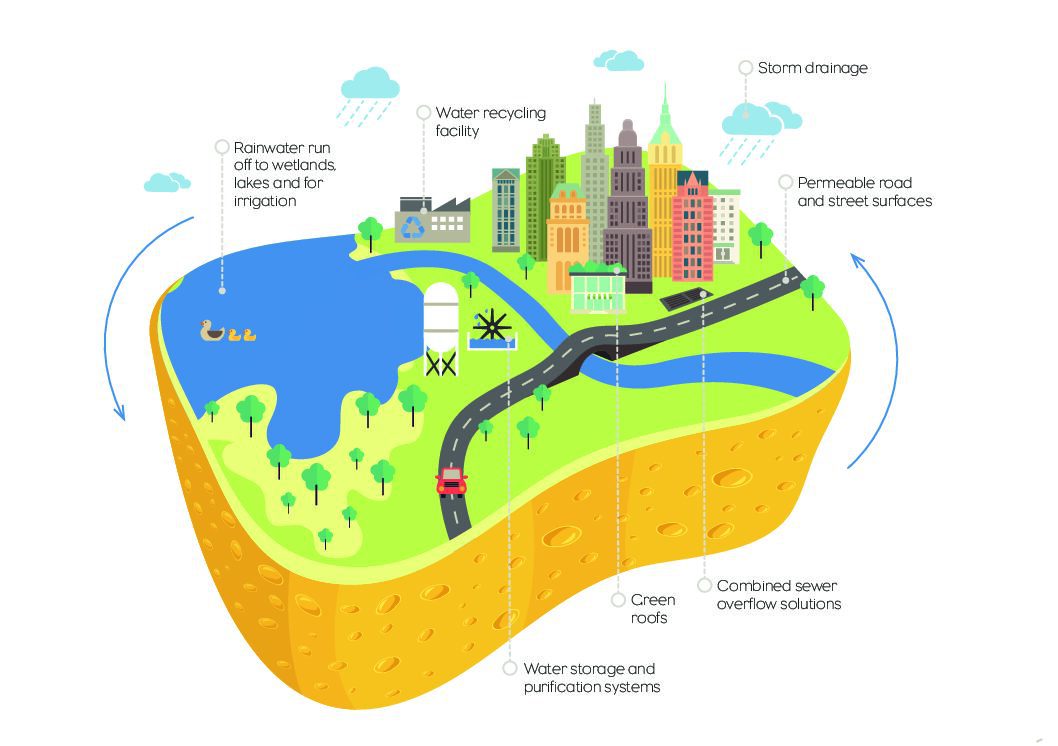 Cities are becoming smarter but it’s the development of sponge cities that will reduce flooding, preserve water, clean up China’s rivers and improve quality of life. By Tom Pattinson and Patrik Li

The goal has been to reduce inefficiencies, to have a positive social impact, and importantly, to improve the physical environment, reconnecting cities with nature. In 2013, China’s Ministry of Housing and Urban-Rural Development announced its first list of pilot smart cities. By April 2015, there were 285 smart cities in China as well as 41 special pilot projects.

Since then, the government has announced intentions to speed up smart city implementation and to enact a new national urbanisation plan. These policies aim to take a scientific and people-centric approach to developing new cities in China.

So what makes a city smart? The list ranges from smart transport technology that includes real-time transport monitoring and car tracking, to smart healthcare systems with cloud-based medicine databases and patient records. Other factors include smart energy with remote monitoring, energy saving and energy transfer systems, as well as more green spaces included in urban plans.

Furthermore, the 13th Five-Year Plan highlighted water conservation as a priority in the nation’s built infrastructure network. After enduring rapid urbanisation, poor water management, high levels of water pollution and frequent drought and flooding, China has launched an initiative to create ‘sponge cities’. These cities aim to absorb and reuse rainwater instead of funnelling it away. The recycled water will then irrigate gardens and farms and refill aquifers; when treated correctly, it can be used in homes for flushing toilets or drinking.

New areas will be designed to capture, clean and reuse water, maximising water retention, whilst minimising the effects of flood, drought and pollution.

In 2015, the central government allocated between RMB 400 million and 600 million per year to each of the 16 pilot sponge cities to allow rainwater to be stored and purified using permeation systems.

Roads and public spaces will be made with permeable surfaces that enable storm water to be absorbed and reused. China states that 20% of all urban areas should be classified as sponge cities by 2020, and that 80% of rainfall should be efficiently managed by 2030.

Arup is one company helping China reach these targets, successfully applying a Sponge City Master Plan in Baotou, a city in Inner Mongolia. Using innovative and sustainable concepts, the British company is developing over 15 square kilometres of the autonomous region’s urban area.

Taking into account ecological and environmental considerations, smart networks were utilised to develop the area to ensure minimal impact on the natural wetlands. This in turn reduces the chance of urban flooding, maximises the reuse of rainwater and constructs drainage networks, as well as ensuring the preservation of the municipal water supply.

“The design provides an opportunity to create beautiful, successful and resilient places,” explains Michael Zhao of Arup China. “The design utilises green infrastructure such as parks and pocket gardens to manage rainfall,” he says. “During the summer months water features will be filled, and plants will be watered using harvested rainwater and runoff,” he continues. “Green infrastructure also allows surface runoff to permeate into the earth, providing a habitat for wildlife and creating attractive spaces for people.”

However as the country faces the challenges of a growing population and climate change, Zhao feels the relationship between our water and our urban areas needs to be addressed.

“Conventional drainage design ignores the importance of infiltration into a natural healthy hydrology,” he says. “A lack of capacity in the sewer systems can also introduce a serious risk of flood. By taking rainwater runoff for use, pressure on existing infrastructure and flood risk can be reduced,” he continues. “This is particularly important for Chinese cities, where the urban density is high, yet the sewer capacity is lacking.”

Working to protect against flooding is Cambridgeshire-based company Hydro International, which has just installed its first storm defence system in China.

Funded by a Chinese government special innovation initiative, the aim is to prevent flooding whilst improving inland river water quality by minimising sewer outflow pollutants going into the river.

Sponge cities absorb a lot of money as well as water, and offer little financial return. “It’s done primarily for environmental reasons and it needs legislation in China to move it on

Haskoll is another British company charged with preserving rural water supplies. It has been appointed lead architectural design company on the Zhengzhou Yellow River Master Plan, a rural water plan to develop and preserve the natural environment of the Huancui Valley near Zhengzhou in Henan province.

“Our project is to protect the valley, which is of great natural beauty and has a lot of diversity in terms of wildlife and plant life, with waterfalls and a river course,” explains Peter Goldsmith, Chairman of Haskoll China. “However, the river course itself has had problems with lack of water in recent years. We want to manage the river so that it doesn’t run dry for quite a lot of the year.

“It’s a protected valley that has a lot of cultural interest, including relics from different dynasties, so we are trying to develop it as an amenity for the incredibly densely populated city of Zhengzhou.”

The government’s recent investment and focus following the 13th Five-Year Plan is essential. As Goldsmith explains, sponge cities absorb a lot of money as well as water, and offer little financial return. “It’s done primarily for environmental reasons and it needs legislation in China to move it on, to encourage the private sector to take up these things and take this seriously.

“The next stage of development for China is not just speed,” he continues. “It’s about quality and efficiency and lifestyle issues. Quality of life is high up the agenda.”

What environmental standards should Chinese firms use along the BRI?