Sir Percy Cradock was an eminent diplomat who served as British Ambassador to China from 1978 to 1984. Juliette Pitt looks back over his time in office as part of our celebration of 50 years of ambassadorial relations between the UK and China

The late Sir Percy Cradock’s long entanglement with China spanned from 1962, when he first joined the foreign office, to 1992, when he served as the Prime Minister’s foreign policy adviser. Cradock’s book, Experiences of China, covers the period, and provides crucial insight into the early decades of Sino-British diplomatic relations. Indeed, he was the chief architect of the 1984 Sino-British agreement under which Hong Kong was handed back to Beijing in 1997.

As we celebrate the 50th anniversary of China and Britain’s ambassadorial relations, it seems fitting to highlight a few of the more insightful stories from Cradock’s tenure as ambassador in Beijing. The following excerpts are all taken from his aforementioned memoir on China, published in 1994.

On his early years in office as ambassador in Beijing:

“It also seemed to me that the role of the embassy was radically changed by the new Chinese policies. In the past our major concern had been reporting and analysis. We had been spectators at an esoteric, sometimes alarming, play, exchanging learned comments with fellow experts in the audience. Now if we played our cards right, analysis would take second place to growing bilateral activity in education, science and technology in the commercial field, in political contacts and possibly even in military matters. China had become a country we had to deal with, rather than simply study.”

His observations as part of important delegations while in office in Beijing:

“They were of all kinds, ministers, and Members of Parliament, business leaders and bankers, actors, and musicians, academics and soldiers, mountaineers and football teams. There was a vast British interest in the country and a fund of goodwill, on which the Chinese, if they were not being deliberately perverse, could draw with confidence. A reforming and liberalising China added to the appeal…

… strangely, for such a bureaucratic administration, programmes [for visitors] were remarkably improvised and sketchy, often rough outlines first produced at the airport with the welcoming party. For one of the most substantial ministerial visits, that of [Conservative politician] Francis Pym, there was, I recall, no written programme at all. On the day, of course, arrangements were always smooth and efficient; but there were heart-searchings beforehand, particularly in the case of royal visitors, who liked these things precisely mapped out in advance.

In Peking, more important delegations, after their normal business, would be accorded a meeting with a leader in the Great Hall of the People, or, more rarely, in the leadership complex at Zhongnanhai. These were heavily ritualised occasions. They would rarely be on the programme, such it was, but left to be conferred as a mark of favour at the last moment…

… Some were so taken with what they saw on their visits, and the ease and affability of their hosts, that they would tell me that the Chinese had found the secret of modern living. When I thought of the pressures of Chinese life and the Chinese I knew well, in their private moments, watchful, chain-smoking, hag-ridden by memories of past purges and fears of purges to come, ceaselessly manoeuvring for small material advantages in conditions of deprivation and tight surveillance, I confess I wondered at the judgement. But it was a tribute to the Chinese people, to their resilience, good humour and adaptability, their capacity to enjoy simple pleasures; and, in a more general sense, it was evidence that the country could still cast its spell.” 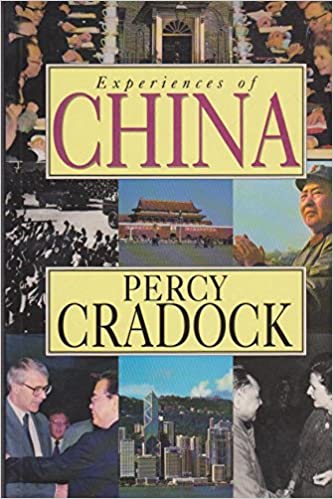 “What was the state of Deng’s China at the end of 1983, more than five years on from my first encounter with it? At the most obvious visual level it was of course vastly changed. As the visitor drove from the airport he saw that the great hoardings that had carried the words of Mao were now covered by advertisements for Japanese fridges or Hennessy cognac. On billboards or on television, pictures of seductive Chinese ladies proclaimed the virtues of soaps and cosmetics. Foreign and local consumer goods were available in quantity and the message was that there was virtue in selling and buying them. Big new hotels were going up, one or two with foreign management and run in the Hong Kong fashion, not as the old Russian barracks. In Peking there was even a branch of Maxim’s…

…There was great access and openness. There were now direct flights into Peking from Western capitals and from Hong Kong. On television every evening there would be ten minutes of straight international news, provided by Viznews in Britain and ABC in the United States, to balance the heavily slanted domestic product. There were many more foreigners about, not just official delegations and tourists, but resident businessmen and experts. China was now a member of the international financial organisations and in receipt of Western aid. Western oilmen, prospecting in the South China Sea, congregated in Canton and there were usually visiting Japanese businessmen in any sizeable provincial town…

…The backdrop to these material and social changes was of course the radical transformation of the political scene. Deng was now supreme. The Party Secretary, Hu Yaobang and the Prime Minister, Zhao Ziyang, were his men. Hua Guofeng, the ‘What-everists,’ the Gang of Four had all been dealt with. Mao himself had been judged and substantially devalued; his victims had been formally rehabilitated. There was political correction as well as economic reform and, as usual in China on the accession of a new dynasty, history had been rewritten.”

Read Also
A timeline of China-UK Ambassadorial Relations: The 1970s

On the future of Sino-British relations:

“It is I think appropriate to end at this point, with the prospects for Sino-Western and particularly Sino-British relations. For this has been the heart of the story. It has been a stormy one, from Qianlong and Lord Macartney, via Mao Zedong’s revolutions and Deng Xiaoping’s reforms to the present-day China of Jiang Zemin and Zhu Rongji. It ends, as it was bound to, with many obscurities and anxieties, but also on a moderately hopeful note. Reason has on the whole prevailed and common interests and understanding have grown. And though there will no doubt be lively passages in the future, that must be the way forward. For China, we must wish a strong, liberalised, modern economy, greater freedom, and the institutions to permit peaceful change. For Britain, a better understanding of China and its point of view, plus a clearer assessment of Britain’s interests and capacities in a rapidly changing world.”

How to sell in China: E-commerce platform or branded website?

What does the National Security Investment Act mean for British businesses in China?