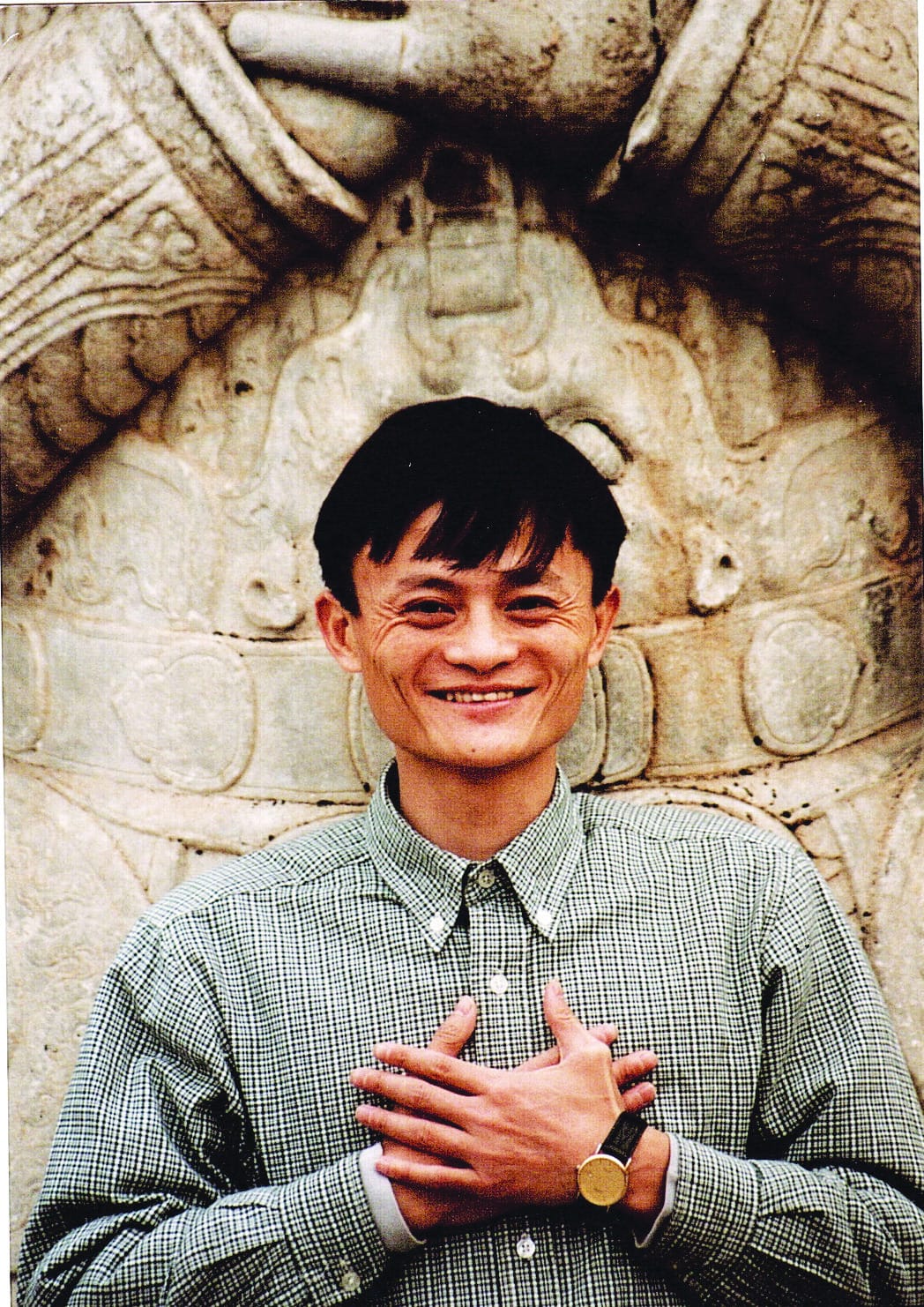 Jack on the day he met Jerry Yang
Share

The life of Jack Ma, Alibaba’s charismatic CEO, has been told in a new book by the Brit who knew him back when he was working out of a small rented apartment. Ma is now the richest man in Asia, and Clarke tells the story of the man, the company – and China’s rise. He talks to Tom Pattinson Can you tell us about your early career in China?

My China adventure started when Morgan Stanley transferred me from London to Hong Kong back in 1993. As an investment banker working on telecom transactions across Asia, I was intrigued by the PRC – a telecom market of which almost nothing was known. There were only 200,000 mobile phones in the entire country when I moved to Beijing in the summer of 1994 to found BDA. Morgan Stanley was my first client. I spoke no Chinese and expected to stay for just a year. I came for the telecom opportunities but became witness to the early days of China’s Internet expansion, and have never left.

At what point did you meet Jack Ma?

I met Jack in the summer of 1999 in the small apartment in Hangzhou where he, his wife and sixteen co-founders had launched Alibaba a few months earlier. We hit it off, he talked a big game but was amusing company and oddly convincing. From that point on I enjoyed making regular trips to Hangzhou. Jack and I ended up as fellow speakers on China’s booming Internet market as the dotcom bubble inflated, culminating in an event at Harvard in January 2000. On our return to Asia, Alibaba hired me as a consultant to help with their plans for expansion in Europe – with their first office in London – and other tasks.

How have your paths crossed since?

Meeting Jack today is not like meeting him back in 1999. Although he remains extremely engaging and down-to-earth, as one of China’s most recognisable figures he is of course often surrounded by a crush of people seeking to do deals or snap selfies with him. I’ve seen Jack regularly over the years as his company, audience and fame grew, crossing paths at events in China, London and Silicon Valley, whereas as a visiting scholar at Stanford University I welcomed him on stage in 2011 to discuss his plans for Alibaba’s future, including designs on companies in the US such as his shareholder Yahoo. I last saw him in London when he addressed a group of British entrepreneurs at 10 Downing Street. Jack is now a regular visitor to Number 10 as a member of the Prime Minister’s business advisory group.

I met Jack in the summer of 1999 in the small apartment in Hangzhou where he had launched Alibaba. We hit it off

When and why did you decide to write a book about him? Was there a specific moment?

I’d long wanted to write a book about China’s Internet sector, and the rise of the country’s private sector. While watching the hype surrounding Alibaba’s 2014 IPO on the New York Stock Exchange – which at $25 billion remains the world’s largest – I realised that Alibaba was the perfect vehicle to tell the story both of the company and its founder, but also the wider technology and entrepreneurial revolution unfolding in China. True, if you’re talking about a figure with whom many people in the West – and indeed in developing economies – can identify. Perhaps we project our hopes and aspirations for a China that is more like the rest of the world on to figures like Jack, who stands out as one of the most accessible given his background as an English teacher and his gift of the gab – but he did grow up in a household of storytellers, which helps explain his beguiling ‘Jack Magic’ charisma.

As one of China’s richest people, not surprisingly Jack has a huge following at home, especially among the country’s youth, who see his story as a get rich quick inspiration. But as I detail in the book, Jack experienced many challenges and failures along the way. Jack is also quick to point out the burdens of great wealth, and the responsibility he feels to use his fame to advance causes such as the environment and healthcare, about which young people too are increasingly concerned.

How do you think Ma is regarded by the government in China?

I would say when talking about the Chinese government “there is no they there”. It comprises many different formal entities and informal interest groups and factional alliances. Jack likes to joke that business people should “fall in love with the government, but never marry it.” I joke in the book that if he was to marry the government he would become a polygamist – there are many brides to think about. But in all seriousness, Jack and other high profile entrepreneurs have to tread carefully, especially as they expand into area like finance or the media which are heavily controlled by the state. I call the last chapter of the book ‘Icon or Icarus’ for this purpose. Can businesses grow in China autonomous from the government?

Businesses that try to go entirely as a result of government patronage are bound to fail. But in many sectors, ignoring the government entirely is neither possible nor advisable. The trick is to respect the government, but not be beholden to it.

What do you think his strategy was by buying the Hong Kong newspaper the South China Morning Post?

Alibaba’s acquisition, and investment in fresh technology and other resources, probably saved the company from decline or worse. At the same time, the political atmosphere in Hong Kong today is so charged that it will be hard for any company based on the mainland not to be seen as having ulterior motives in investing in the territory’s media sector. Alibaba is determined to prove its critics wrong, although it will take a long time before this will be possible.

Jack likes to joke that business people should “fall in love with the government, but never marry it.” I joke in the book that if he was to marry the government he would become a polygamist – there are many brides to think about.

Do you think it is possible for non-Chinese companies to grow to such a scale in China?

No. Put aside issues of regulation for a second – although these have prevented companies such as Facebook, Twitter and Google from establishing or maintaining beachheads here – China is a market where there is ample entrepreneurial talent, capital and opportunities created by the legacy of state-planning. A ‘home court’ advantage is at play here as well as the visible hand of the state itself in protecting the market. Jack on the day he met Jerry Yang

Has the recent changes in China’s policy helped or hindered entrepreneurship and the growth of independent companies?

It’s a mixed bag. In terms of basic bureaucracy, life has got much easier for small and medium-sized entrepreneurs. The anti-corruption drive has also helped in important ways. But the lack of predictability of regulations, including in attractive but sensitive areas like finance and the media, make it difficult for entrepreneurs to plan and invest for the long term. The much hoped for pull-back of state-owned enterprises doesn’t seem to be happening, as stability trumps reform.

Where did Ma succeed where so many else failed? Is there a secret to his success?

The secret to his success really is his failures – including the two companies he founded before Alibaba – and the lessons he drew from them. Not giving up, remaining flexible, and relying on your wits and charm are all hallmarks of Jack’s approach. He has made humility a virtue again, something inspired by his love of Chinese martial arts novels. What can British businesses learn from your book or from Ma’s success?

In one phrase: know your customer. Just like Jeff Bezos at Amazon, Jack has always maintained a relentless focus on serving the customer first. For British companies seeking to win in China, getting as close as possible to the local market is essential. This often will mean picking the right local partner and backing them to the hilt, not something that is easy across time zones and language barriers. Thanks in no small measure to Jack’s success, the Internet is increasingly the best platform for British companies to achieve their ambitions here.

The House that Jack Ma Built is published by Harper Collins and is available on Amazon.

Are China’s intellectual property issues getting better or worse?