Home NewsCoronavirus How to travel to China in 2022
Coronavirus 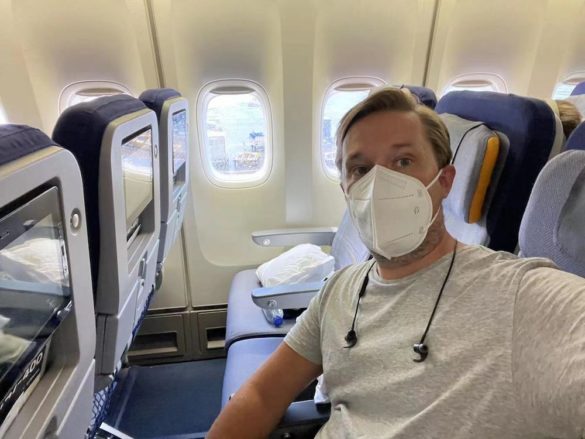 Can you travel to China right now? The short answer is yes, but there are processes in place that you need to follow. Tom Simpson, CBBC’s Managing Director of China Operations and China Chief Representative, recounts his recent journey to China and shares important tips for those looking to do the same

Since late March 2020, China’s borders have been tightened considerably, with the number of travellers entering China dropping sharply.

International flight seat capacity and passenger numbers are down by 95% compared to pre-Covid-19 levels. Thankfully, recent efforts to increase international direct flights with China indicate this figure may begin to recover marginally as more flights are added to existing and new routes. China’s quarantine measures, however, are expected to remain in place for the foreseeable future, and many are understandably put off by the prospect of ten days in a hotel room and the cost of making the journey.

Early Summer of 2022 saw a reduction of China’s quarantine duration from 21 to 10 days, as well as the simplification of the pre-departure testing procedure. Although still a lengthy and expensive process, these changes have helped to encourage those living in China or overseas to take on the journey.

In addition, China has also relaxed its visa rules by removing the requirement for British nationals to acquire PU letters in order to apply for a Z (work), M (business), or F (non-commerce visit – e.g. lecture, research, cultural exchange) visa.

Below is a summary of my experience of travelling to China in late July and early August of 2022. I have written this article in the hope it could be helpful to anyone planning to make a similar trip from the UK to China via a third country (in this case, Germany), although I must stress that experiences can vary greatly depending on which route to China you take. This is also by no means a complete guide and only aims to provide a summary of what I consider to be the key information. I also already had a Chinese visa so I’m not able to offer any first-hand experience of the application process at present.

The information below covers available flights, my experience with the pre-departure and arrival procedures and some tips for quarantine.

What flights to China are available?

I booked a seat on the German Chamber (AHK) charter flight service which operates one-way flights from Frankfurt to Qingdao. My ten-day quarantine subsequently took place in Qingdao. Further details on this service can be found here.

Direct flights between the UK and China had been suspended since Boxing Day 2020 but have now resumed with Air China between Heathrow and Beijing/Shanghai as of August 2022, with other Chinese airlines planning to operate additional routes also. Airlines will start initially by operating flights from China to the UK with return flights expected to resume in due course. For those looking to travel to China I recommend keeping a close eye for further announcements from Air China, Capital Airlines, China Eastern, and China Southern.

Other popular routes for those travelling from the UK to China include flights transiting in Helsinki and Copenhagen as well as flying to Hong Kong and then on to Xiamen or other cities within China. Hong Kong’s reduced quarantine time of three days now makes this option a lot more appealing, as do the lower cost of London to Hong Kong flights when compared to those going to the Mainland. Destinations such as Xiamen and Qingdao also have a good reputation for the standard of quarantine hotels they provide. 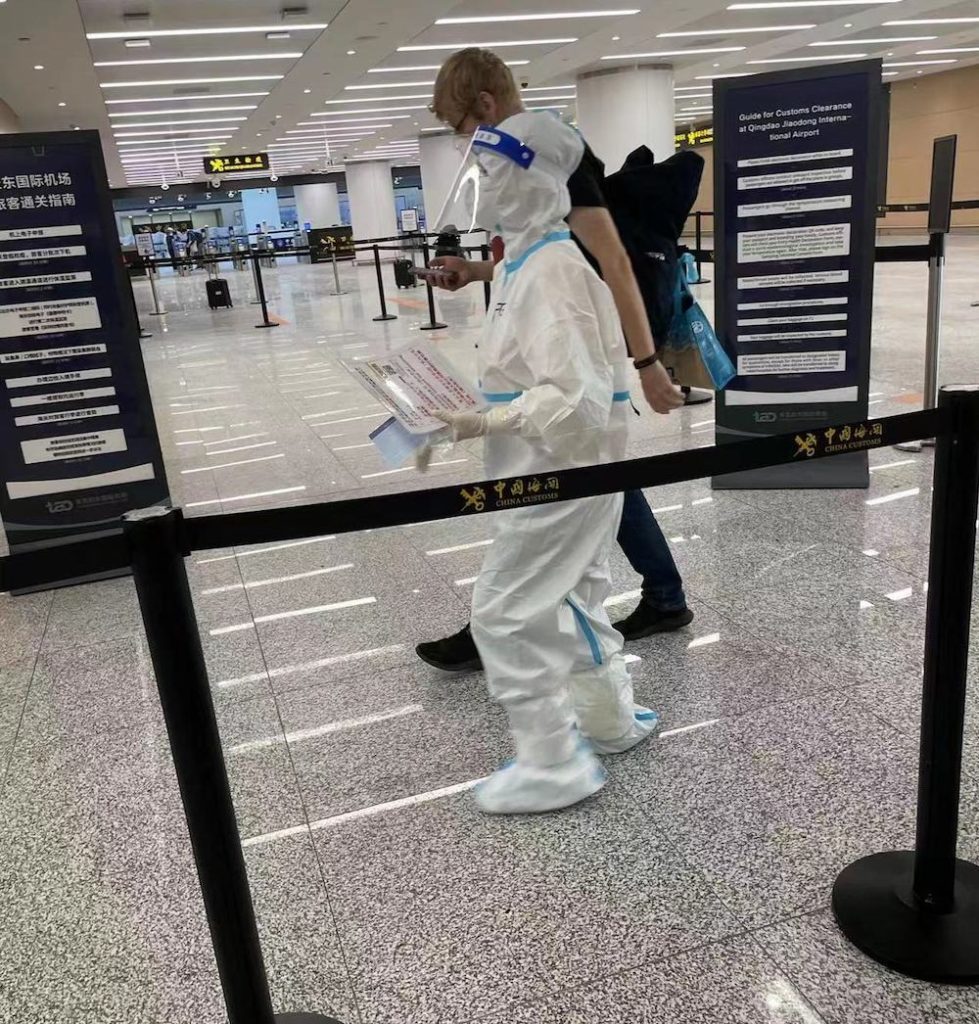 As my journey began in Edinburgh, I had to acquire a Health Declaration Certificate (HDC) before I departed the UK to catch my flight in Germany. On arrival in Frankfurt, I was then required to complete a second HDC application before boarding my flight to Qingdao. Each HDC application required two PCR tests and various other pieces of information such as my flight itinerary, visa, and so on.

Below is a step-by-step summary of the pre-departure process I followed:

Travel to your transit country (in my case this was Frankfurt).

*Note that for the second HDC application I am also aware of people who have travelled from the UK to China via a third country (e.g. Copenhagen) and taken the second pair of PCR tests within a transit period of as little as 8 hours and still received a green code for the second HDC application. The two tests will still need to be taken at different testing sites or by a company that can provide a China-specific service for both tests. Though I haven’t found it anywhere in writing, this suggests the Chinese Ministry of Foreign Affairs may show flexibility on timescales for travellers who are transiting through third countries.

Prior to boarding, the airlines I was flying with asked to see my second green HDC code. I was also asked to complete a Chinese Customs Declaration on my phone. Once completed you will receive a QR code which will need to be shown on arrival, so again, take a screenshot. 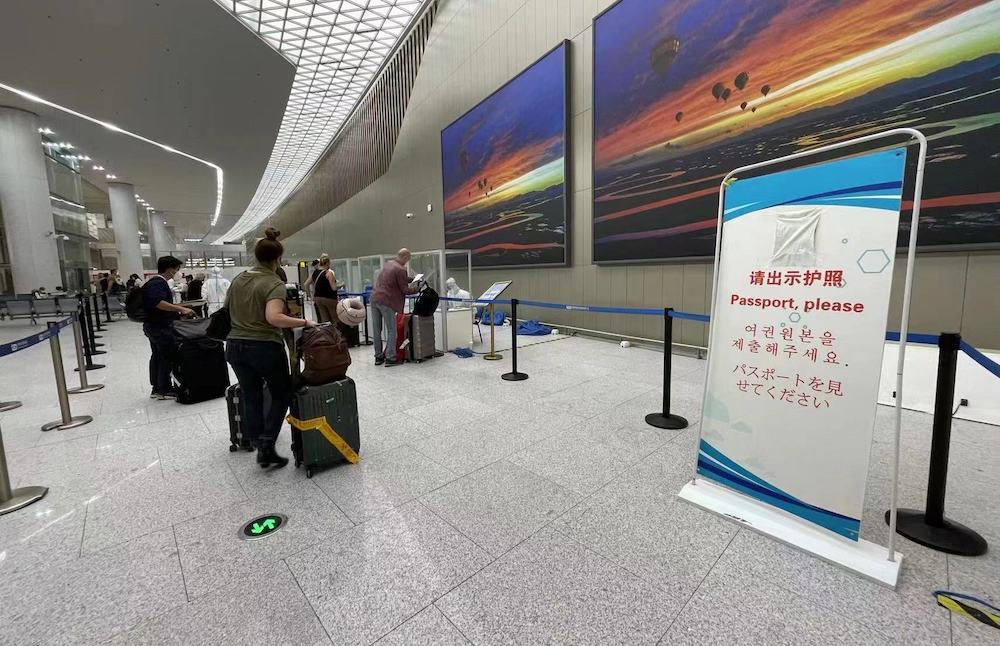 What happens upon arrival in China?

On arrival in Qingdao, I had to provide various forms which you can download below. To speed up the process, I recommend printing out these forms and filling them out ahead of your arrival.

When I arrived at the airport, I was required to take a PCR test, submit the forms above and show the Chinese Customs Declaration QR code before collecting my luggage and being assigned a hotel. The whole process took around three hours. The hotel was a further hour away. On arriving at the hotel, I was asked to provide my onward (home) address in Beijing, where I would travel to after completing my quarantine. The hotel room charges were paid upfront with any additional expenses paid the day before checkout.

Quarantine itself was largely uneventful, as you might expect. I would strongly recommend bringing supplies of your favourite coffee, tea, snacks, and whatever you can fit into your luggage. Items I found particularly useful included a cafetière for making fresh coffee and a penknife, as all cutlery provided was disposable. Snacks like Babybel cheese, dried meats, cereal bars and nuts were all greatly appreciated. The food provided by the hotel was better than I was expecting but still, bring what you can. The hotel I stayed at also provided basic toiletries, alcohol wipes and tissues, but I believe this can vary depending on where you stay.

I am writing this article on the final day of quarantine in Qingdao. My Beijing HealthKit QR has already reverted to green ahead of my flight early tomorrow morning. Ahead of checking out of the hotel, I will be given a hardcopy of all my test results and a ‘certificate of completion’ for my ten days of quarantine. Though rather than a congratulatory pat on the back the certificate is to provide proof I have completed the ten days of isolation in case I am challenged at any point.

All in all, it was a smoother experience than I was expecting. A lot of jumping through hoops and admin. The uncertainty of successfully completing four PCR tests and two HDC applications in four days and transiting through busy airports ahead of departure is the biggest downside along with the high cost – though of course worth going through to see family and friends again after two and a half years. The resumption of direct flights will help reduce some of the pre-departure stress and hopefully, with time, begin to reduce the costs involved.

What are the differences between influencer marketing in the UK and China?

Exporting to China: How to find and hire staff

What are the latest covid rules...

The latest updates on China’s travel...

What are the latest covid rules for...