Getting healthcare in China can be complex, depending on employment, location, insurance-type and many other variables. Hai Feng of Peking University gives a comprehensive overview of how China’s healthcare system actually works 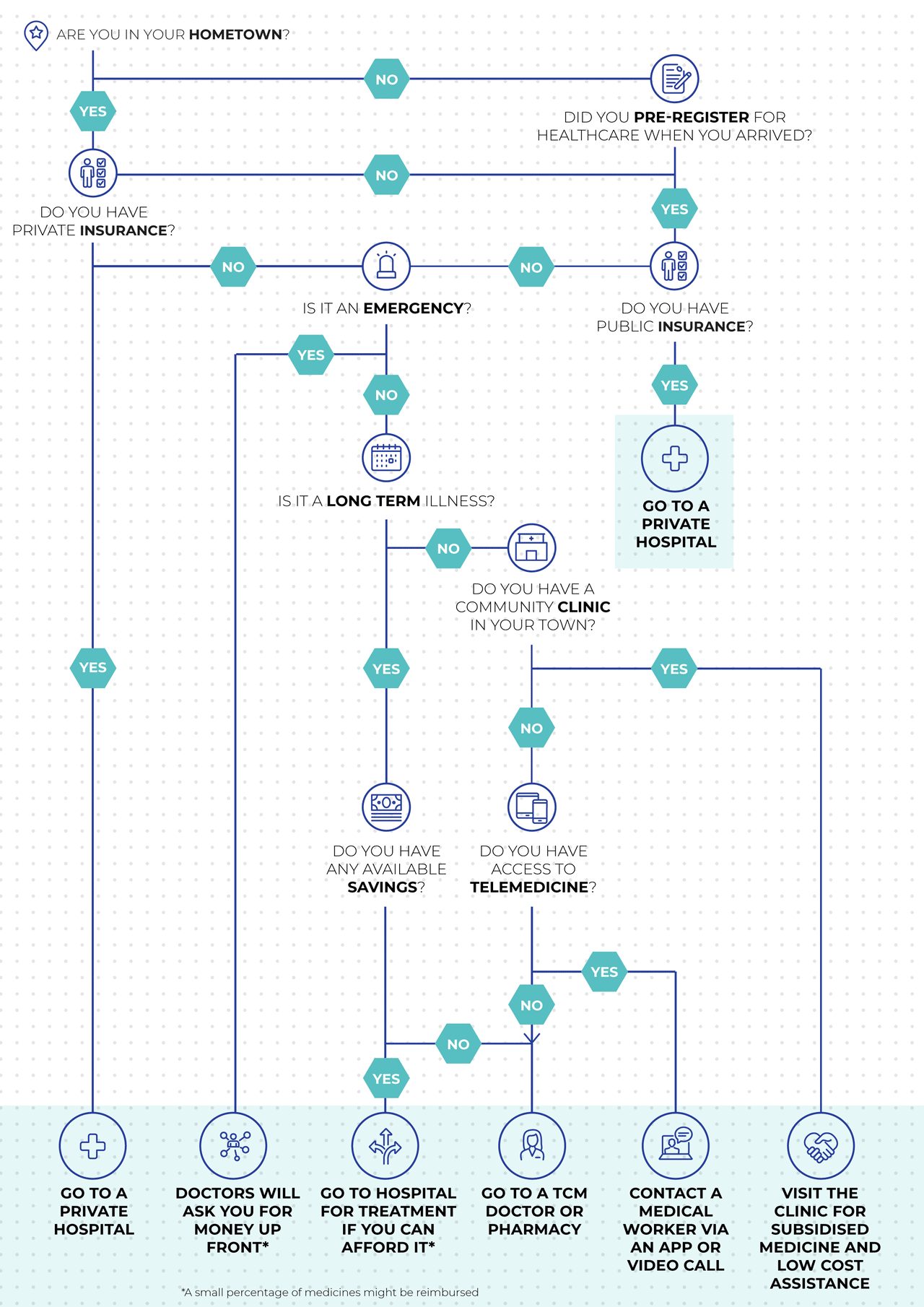 In 2018, 897.4 million people were covered under one of these two insurance schemes. The Urban-Rural Resident Basic Medical Insurance is financed through annual fixed premiums, meaning individual premium contributions are minimal, and government subsidies for insurance premiums make up the majority of insurer revenues. In regions where the economy is less developed, the central government provides a much larger share of the subsidies than provincial and prefectural governments do. In more-developed provinces, most subsidies are locally provided (mainly by provincial governments).

Permanent foreign residents living in China are entitled to the same coverage benefits as citizens. However undocumented immigrants and visitors are not covered by publicly financed health insurance.

So what exactly is covered by public health insurance?

The benefits package in each case is defined by local governments, and therefore varies from province to province, and from city to city. But publicly-financed basic medical insurance typically covers:

A few dental services (such as tooth extraction, but not cleaning) and optometry services are also covered, but most are paid out-of-pocket. Home care and hospice care are often not included either. Durable medical equipment, such as wheelchairs and hearing aids, is also often not covered.

Preventive services, such as immunisation and disease screening, are included in a separate public-health benefit package funded by the central and local governments; every resident is entitled to these without copayments or deductibles.

Maternity care is covered by a separate insurance programme but is currently being merged into the basic medical insurance plan. 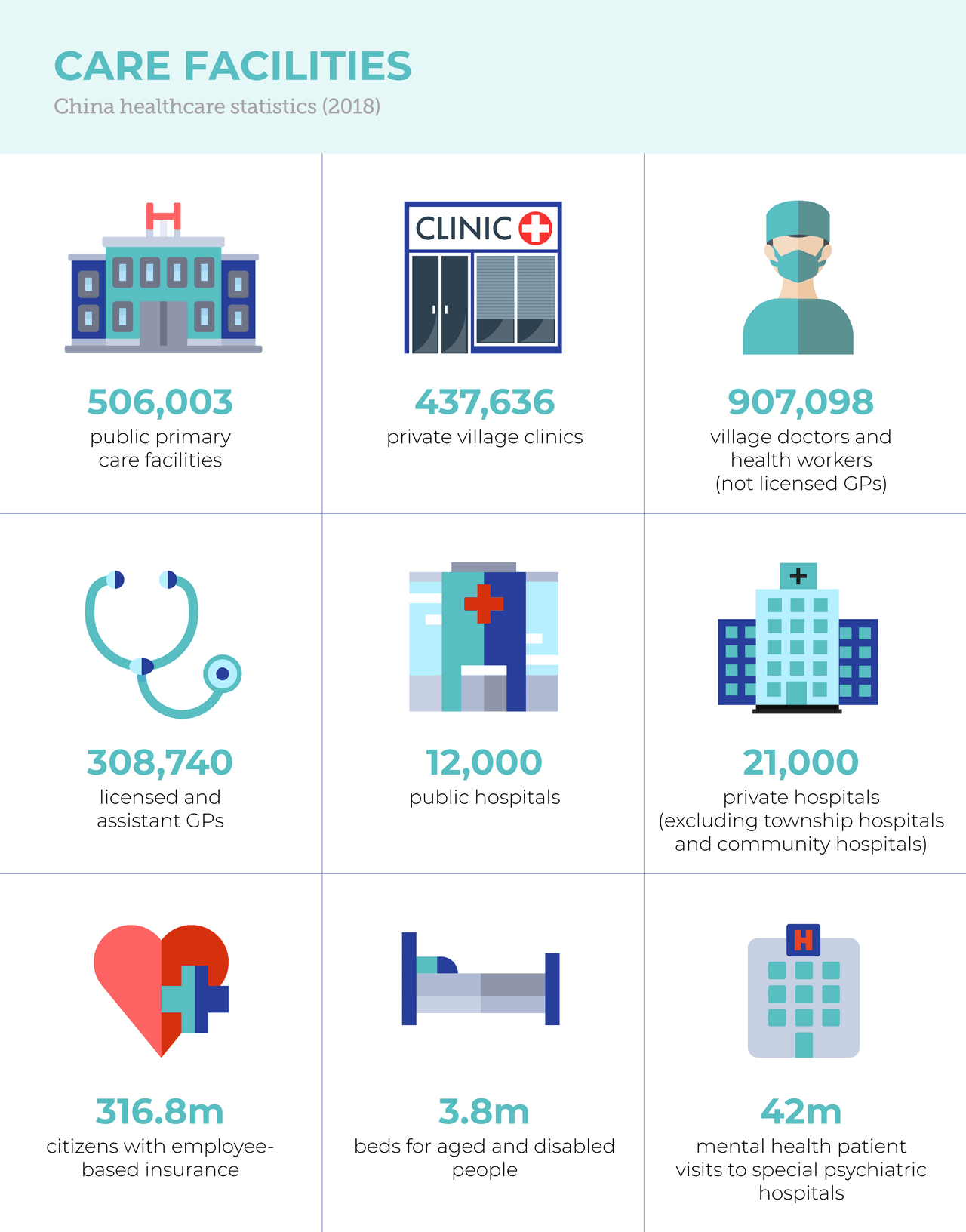 Inpatient and outpatient care, including prescription drugs, are subject to different deductibles, co-payments, and reimbursement ceilings depending on the insurance plan, region, type of hospital (community, secondary, or tertiary), and other factors:

Preventive services, such as cancer screenings and flu vaccinations, are covered by a separate public health programme. Children and the elderly have no co-payments for these services, but other residents have to pay 100% of these services out-of-pocket.

People can use out-of-network health services (even across provinces), but these have higher co-payments.

For individuals who are not able to afford individual premiums for publicly-financed health insurance, or cannot cover out-of-pocket spending, a medical financial assistance programme – funded by local governments and social donations – serves as a safety net in both urban and rural areas. 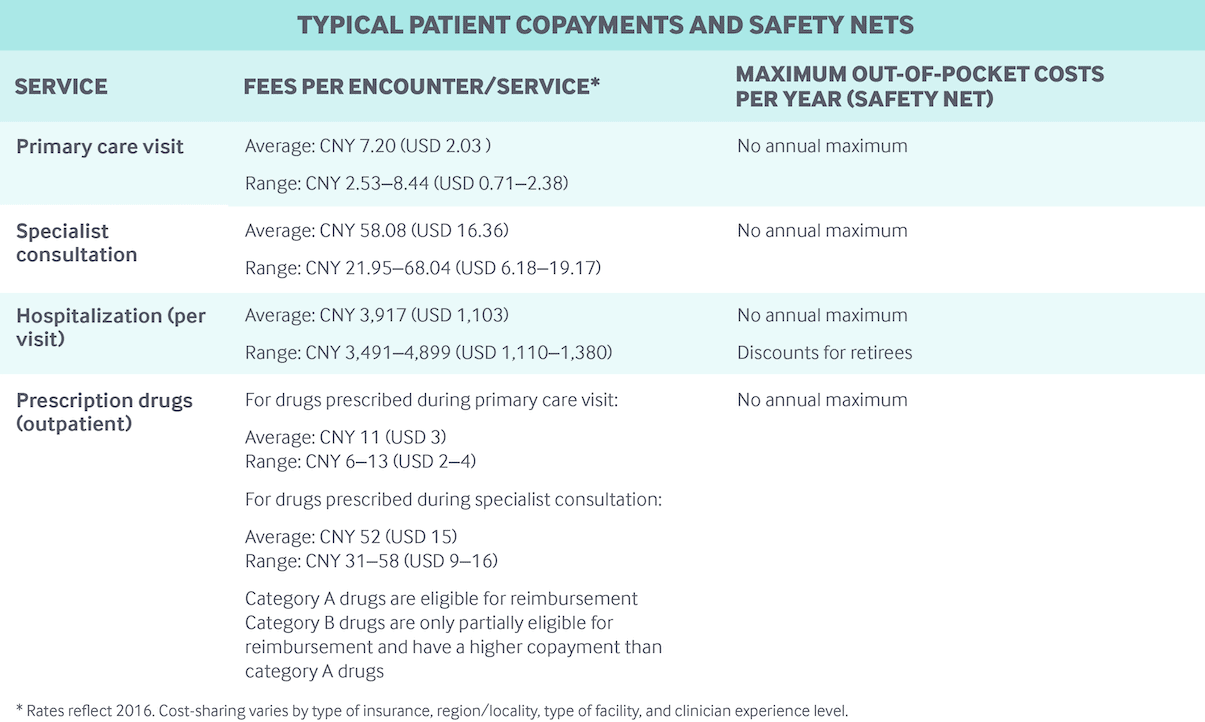 How healthcare is provided

Primary care is delivered primarily by:

Patients are generally encouraged by local governments to seek care in village clinics, township hospitals or community hospitals, because cost-sharing is lower at these than at secondary or tertiary hospitals. However, residents can choose to see a GP in an upper-level hospital if they wish. Signing up with a GP in advance is not required, and referrals are generally not necessary to see outpatient specialists. There are few localities that use GPs as gatekeepers.

In 2018, China had 308,740 licensed and assistant GPs, representing 8.6% of all licensed physicians and assistant physicians. Unlike village doctors and health workers in the village clinics, GPs rarely work in solo or group practices; most are employed by hospitals and work with nurses and non-physician clinicians, who are also hospital employees. 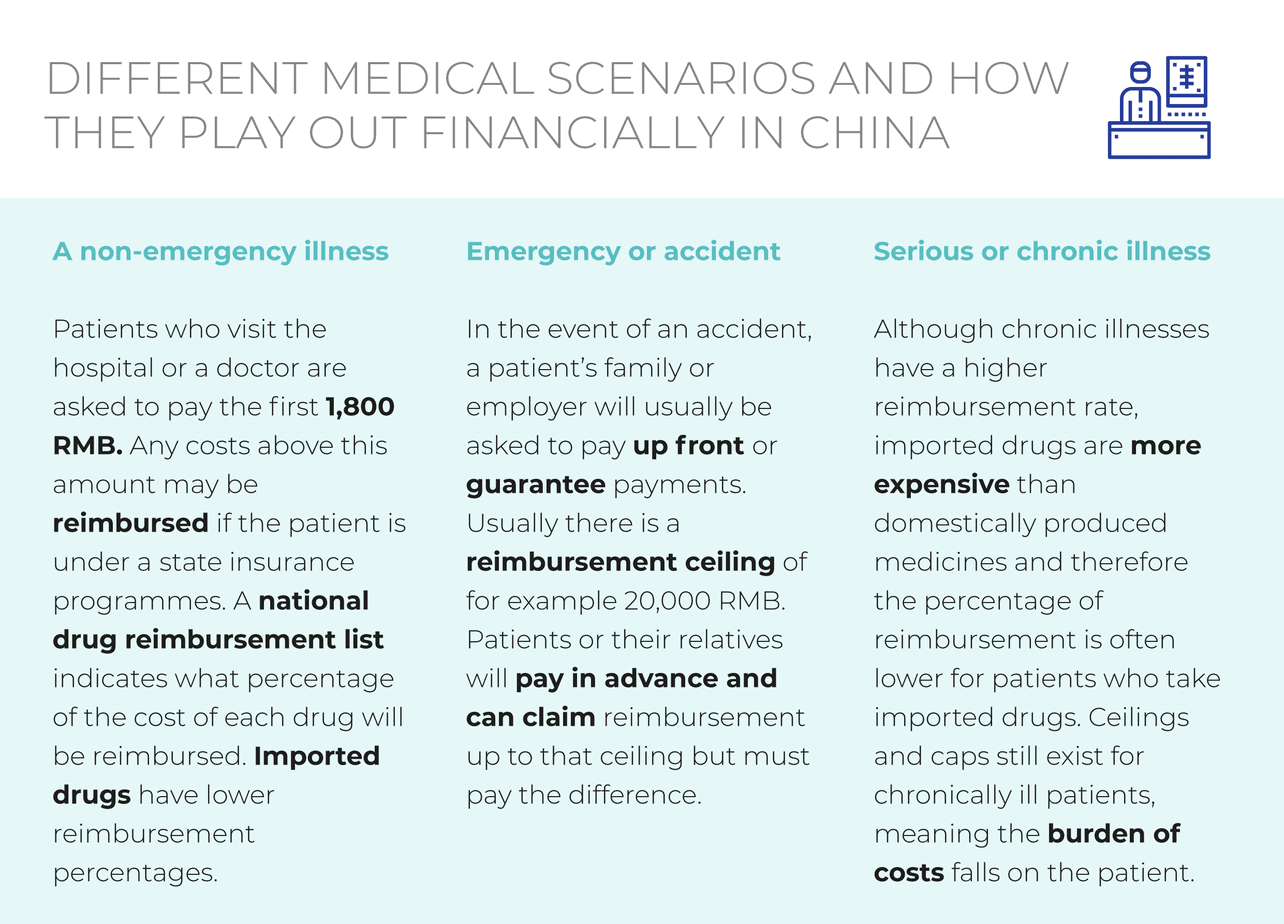 Primary care in government-funded health institutions are regulated by local health authorities and the Bureaus of Commodity Prices. Primary care doctors in public hospitals and clinics cannot bill above the fee schedule. To encourage nongovernmental investment in health care, China began allowing non-public clinics and hospitals to charge above the fee schedule in 2014.

Village doctors and health workers in village clinics earn income through reimbursements for clinical services and public health services such as immunisations and chronic disease screening; and government subsidies are also available. Incomes vary substantially by region. GPs working at hospitals receive a base salary along with activity-based payments, such as patient registration fees. With fee-for-service still the dominant payment mechanism for hospitals (see below), hospital-based physicians have strong financial incentives to induce demand. It is estimated that wages constitute only one-quarter of physician incomes; the rest is thought to be derived from practice activities. No official income statistics are reported for doctors.

With fee-for-service still the dominant payment mechanism for hospitals (see below), hospital-based physicians have strong financial incentives to induce demand.

Hospitals can be public or private, non-profit or for-profit. Most township hospitals and community hospitals are public, but both public and private secondary and tertiary hospitals exist in urban areas.

In 2018, there were approximately 12,000 public hospitals and 21,000 private hospitals (excluding township hospitals and community hospitals), of which about 20,500 were non-profit and 12,600 were for-profit.

Hospitals are paid through a combination of out-of-pocket payments, health insurance compensation, and, in the case of public hospitals, government subsidies. These subsidies represented 8.5% of total revenue in 2018.

Long-term care and social support are not a part of China’s public health insurance schemes. In accordance with Chinese tradition, long-term care is provided mainly by family members at home. There are very few formal long-term care providers, although private providers (some of them international entities) are entering the market, with services aimed at middle-class and wealthy families. Family caregivers are not entitled to financial support or tax benefits, and long-term care insurance is virtually non-existent; expenses for care in the few existing long-term care facilities are paid almost entirely out-of-pocket.

In accordance with Chinese tradition, long-term care is provided mainly by family members at home.

Governments encourage the integration of long-term care with other health care services, particularly those funded by private investment. There were 3.8 million beds available for elderly and disabled people in 2016.

Some hospice care is available, but it is normally not covered by health insurance.

Purchased primarily by higher-income individuals and by employers for their workers, private insurance can be used to cover deductibles, co-payments, and other cost-sharing, as well as to provide coverage for expensive services not paid for by public insurance. 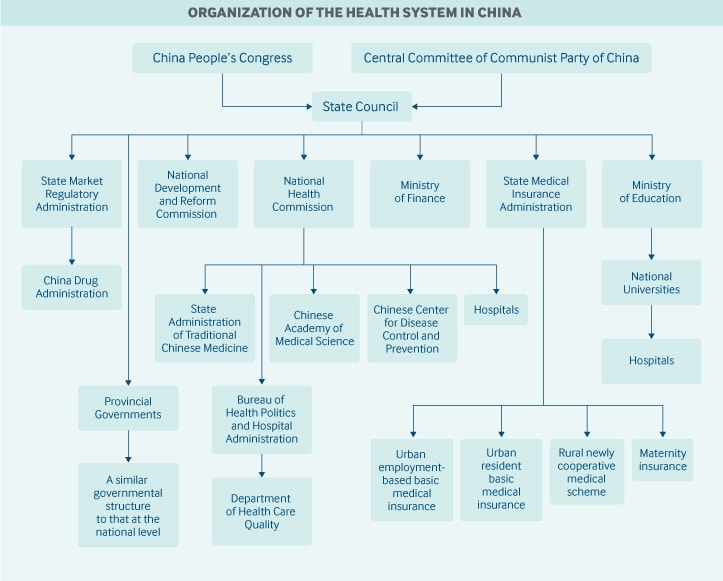 The National People’s Congress is responsible for health legislation. However, major health policies and reforms may be initiated by the State Council and the Central Committee of the Communist Party, and these are regarded as law.

The newly created State Market Regulatory Administration includes the China Drug Administration, which is responsible for drug approvals and licenses.

The China Center for Disease Control and Prevention, although not a government agency, is administrated by the National Health Commission.

The Chinese Academy of Medical Science, under the National Health Commission, is the national centre for health research.

This report was commissioned and first published by the Commonwealth Fund. More information can be found at its website To learn more about China’s healthcare system contact CBBC‘s healthcare lead wendy.wang@cbbc.org.cn for more information.

If you are a British company in the healthcare industry, call +44 (0)20 7802 2000 or email enquiries@cbbc.org now to find out how CBBC can help you find the perfect partner to support your growth in China.