How China saved the treasures of the Forbidden City during WW2 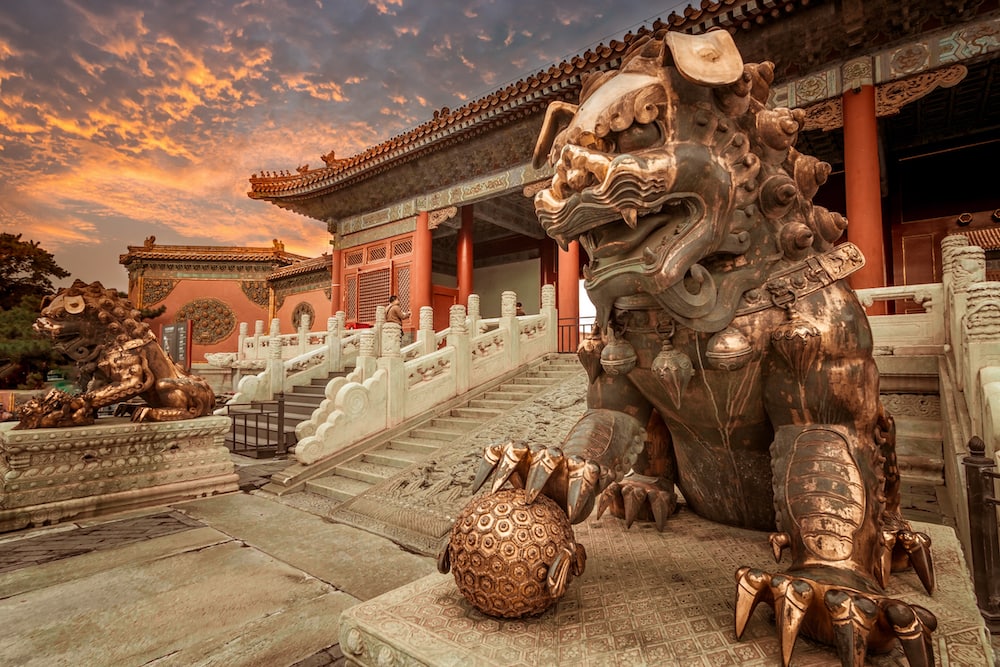 A new book by former BBC correspondent and novelist Adam Brookes describes the daring rescue of ancient treasures from the Forbidden City, and how British ships played a small but important role in making sure the treasures survived their journey. Paul French finds out more

Adam Brookes is a former BBC Beijing correspondent who then turned his hand to writing China-set spy fiction with the trilogy Night Heron, Spy Games and The Spy’s Daughter. Most of his journalistic career has been spent in and around China with stints in Afghanistan, North Korea and Mongolia after initially studying Chinese at SOAS.

Now, Brookes has written a well-researched and thrilling history of the intrepid curators who saved the treasures of the Forbidden City during World War II. It’s a tale of Indiana Jones-like daring-do mixed with an account of the amazing artworks that were preserved. And there’s a British angle too. Paul French caught up with Brookes to talk about Fragile Cargo: China’s Race to Save the Treasures of the Forbidden City (Penguin Random House).

What was the “spark” for this story?

Simply that no full English language account exists. Many books about the period reference the fact that a significant part of the imperial art collections – resident in the Forbidden City for hundreds of years – were crated up and evacuated from Peking in 1933. But very little detail is available in English as to exactly how and why it was done and the enormous effect it has had on some of the most important art ever created, anywhere. In Chinese, wonderful accounts, full of texture and atmosphere and characters, are available, and I thought it was time someone rendered them into English. In addition, the last two eyewitnesses to these events – as far as I am aware – were very elderly, and time was running out to interview them.

The first gallery to open to the public in the imperial precincts opened its doors in 1914! It was small and access was limited. It was known as the ‘Gallery of Antiquities’, or sometimes as the ‘Government Museum’. But the full Forbidden City and its art collections opened later. The last emperor, Pu Yi, was evicted from the Forbidden City in November 1924 by a warlord, Feng Yuxiang, who had seized control of Peking. A month later, in the cold of a Peking December, teams of professors, art historians and officials fanned out through the palaces and began to inventory every piece of art they found. They inventoried 1.17 million objects. The resulting catalogue ran to 28 volumes. Many of those on the inventory teams went on to oversee the opening of the Forbidden City to the public and the establishment of the Palace Museum on 10 October 1925. It was the central cultural institution of the Republic of China.

Some of the treasures within the Forbidden City made their way on loan to London in 1935 for the International Exhibition of Chinese Art at the Royal Academy. It was what we might now call a “blockbuster exhibition”. What was displayed in London and how important was that exhibition in generating interest in Chinese art in Britain?

About a thousand pieces from the Forbidden City made their way to London aboard a Royal Navy County class cruiser, HMS Suffolk, in 1935. Among them were important landscape paintings dating back to the Song period (960-1279), rare porcelain and ancient bronze vessels. The general public in Europe was accustomed to seeing some Chinese porcelain, as well as Chinese ‘curios’, small collectible objects like carvings or snuff bottles. But these masterpieces of landscape painting and calligraphy, exquisite imperial porcelain, beautiful works in jade – all this was new to the European viewer. The exhibition created a sensation. It lent momentum to the study of Chinese art in Europe and the United States, and it created public sympathy for the young, fragile Republic of China that faced such a huge threat from Japan.

As concerns over a Japanese invasion of China grew, various elements of the Forbidden City’s collections went to Shanghai, Nanjing, Chongqing, Xi’an, Kunming, and elsewhere. Who made the decisions on where to send the art for safeguarding and where did it end up?

It was a haphazard, sometimes chaotic process. The central bureaucracy of the Republic of China had its own ideas about which locations were suitable for safe storage of the imperial collections for the duration of the war – some of them not very good at all. In the end, the Palace Museum’s Board of Directors decided where the art would go, and took guidance from the museum’s director, Ma Heng. The art, meticulously packed in 20,000 wooden cases, travelled by steamship, by rail and by truck, and sometimes on shoulder-poles toted by porters, for thousands of miles into west China, far from the front line in China’s war with Japan, but always within range of Japanese bombers. Ma Heng sought out caves, temples and ancestral halls in quiet villages in Sichuan and Guizhou provinces where he stored the art for the war years in the fraught hope that it would be safe from thieves, damp, insects and Japanese bombs. 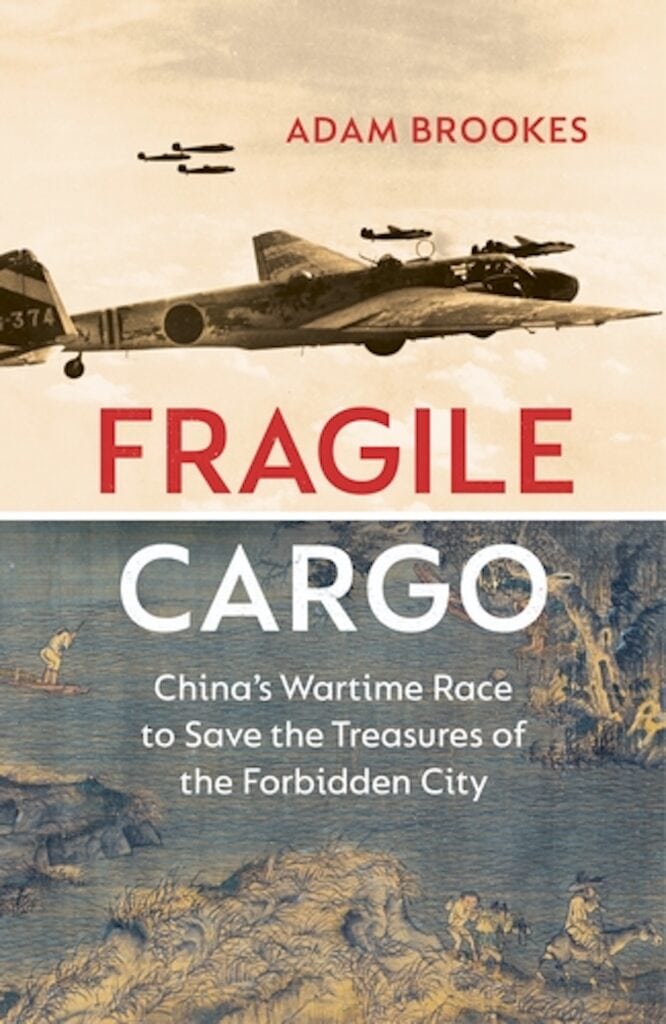 I know you’ve talked about how China’s participation in the Second World War is a bit of a black hole for many British readers. Are you hoping this book can partly address that gap in our knowledge?

In Fragile Cargo, I have tried to locate the story of the art treasures very firmly in the context of China’s Second World War. I want the reader to understand what Chinese people went through, and the scale and monstrous nature of the war in China. Something in the order of 20 million Chinese people perished in the war between 1937 and 1945. The Republic of China was an ally of the US and the UK and was the only state in East Asia to hold out against the Japanese invasion. Yet this theatre of war is almost completely ignored in English language histories of World War II. It’s just absent from any popular understanding of what took place in those frightful years. Many historians are taking fresh approaches to the historiography of World War II, and I wrote Fragile Cargo in the hope that I can, in some small way, persuade the reader to think afresh about the scale and scope of the War.

Can you talk a little about how perhaps Britain helped in the race to save China’s treasures and their recovery after World War II?

The British were instrumental in the story in two important ways. First, in late 1937, nearly 20,000 cases of art languished in the then capital, Nanjing, even as Japanese bombs fell and Japanese troops and tanks approached the city’s walls. The Palace Museum curators were desperate to evacuate the cases from Nanjing to safety and had only days to do so, but lacked funds or any means of transportation. A deft bureaucrat named Han Li Wu approached the board of the British Boxer Indemnity Fund and secured loans, and a British official of China’s Customs Service turned those loans into cash to pay porters, truck drivers and steamship operators.

Second, many of the steamships the museum chartered to transport the cases of art up the Yangtze river were owned by Butterfield and Swire and crewed by British officers. Their neutrality at the time lent some protection from Japanese attack. There are some wonderful reminiscences from crusty Scottish steamship captains remembering how they loaded thousands of cases of irreplaceable, invaluable art aboard their ships day and night as Japanese bombs fell around them and the Japanese closed in on Nanjing. Seventeen thousand cases of art were evacuated from Nanjing, the last cases leaving only ten days before the city fell to the Japanese with appalling consequences. Without that British assistance, the imperial collections might never have made it out to safety.

What flights are available between the UK and China?

Importing from China: How to source and manage suppliers