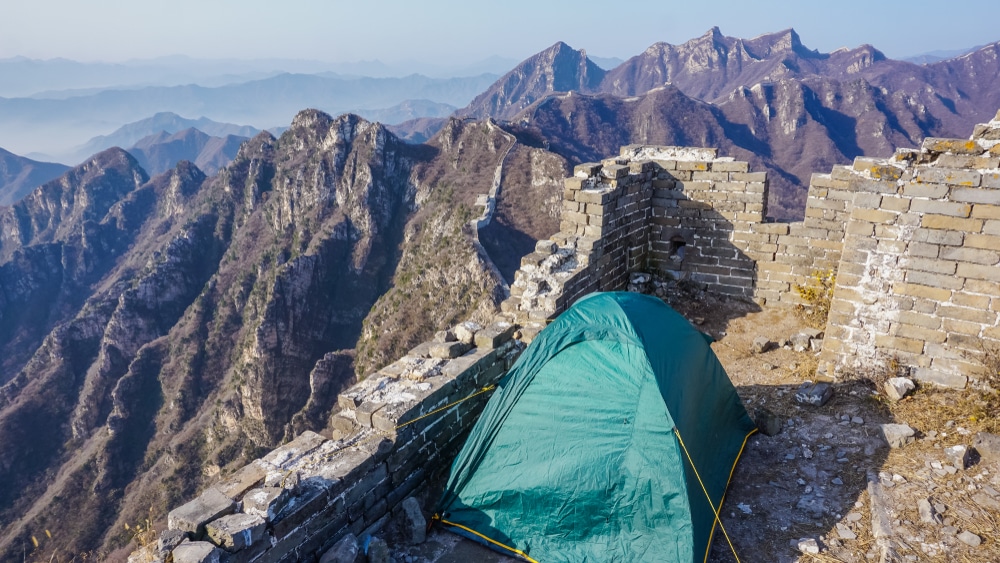 After decades of mass migration to cities, today, many young people in China are turning to nature for adventure, solace, and to escape their urban working lives

With tight border restrictions and barren flight schedules suspending international leisure travel from China and months-long lockdowns in major cities making even inter-provincial travel near impossible, China’s travel sector has had a very difficult couple of years. However, one niche area has seen surprising growth since 2020: camping.

The market for campsites in China increased from RMB 7.71 billion in 2014 to RMB 29.9 billion in 2021 according to data from iiMedia Research Institute quoted in the Global Times. New campsites are springing up on the outskirts of cities, offering the feeling of a holiday without having to worry about crossing into a different province and getting caught up in zero Covid restrictions.

As a recent episode of Tong Digital’s podcast Tracing the Trend explored, beyond the pandemic, there are several factors driving the rediscovery of the Chinese countryside, including a desire to reevaluate the nation’s recent relationship with rural areas, and the increasing pressure of urban lifestyles.

The Chinese countryside: past and present

The historical roots of Chinese attitudes to the countryside can be traced back hundreds – if not thousands – of years, but a notable recent influence was the “up to the mountains, down to the countryside” movement headed by Chairman Mao Zedong in the late 1960s. During this time, 17 million urban youth from across China were sent to remote areas with the expectation that they would learn valuable skills from farming communities. The gruelling lifestyle was heavily romanticised by the Communist Party, as farming communities provided a significant support base for the Communist revolution.

Despite this positive narrative about the countryside, for many, China’s urban spaces have always been associated with privilege. Alongside economic opportunities, this has been one of the factors driving the mass migration from rural to urban areas in recent decades, and has led to “damaging perceptions of the countryside as ‘backwards’, [which] has created a bit of a rift and also socio-economic inequalities between cities and rural areas in more recent decades,” according to Tracing the Trend’s host Stefan Harvey.

Having spent her childhood in Yunnan province, the founder of off-the-beaten-path travel agency Wild China, Mei Zhang, holds two images of the Chinese countryside in her mind. On the one hand is the notion of a timeless countryside, where farmers work in the paddy fields of an idyllic landscape, just as they have done for millennia. However, it cannot be overlooked that these farmers also struggle through hard labour. That struggle is ultimately what leads to younger generations being taught that “this is what you want to get away from, move to the city.”

On the other hand, Zhang recalls recently seeing a farmer using their smartphone to live stream produce to affluent consumers in major cities. Here we can see an overlap between the idea of a timeless agrarian life and cutting-edge technology and consumerism. This concept has been heavily reflected in recent ventures by tech giant Alibaba, which is investing in connecting farmers with city-dwellers via live streaming to maximise sales of produce.

There are three main groups of people returning to and redefining the countryside: tourists, entrepreneurs, and those looking to disengage from city life.

Tourism to rural areas in China is a trend that has largely been driven by Covid-19 and the inability to travel internationally. The aforementioned podcast hosts stress how the taste for visiting remote and under-explored places has increased significantly in light of the pandemic, and that this shift is here to stay. According to stats released by Xiaohongshu, in 2021, there was a 587% increase in posts including the keyword “camping” on the platform compared to 2020. According to Alizila, purchases of outdoor products, from practical tents and mats to more aesthetically-driven glamping accessories such as solar-powered fairy lights, jumped by more than 130% in the 2021 618 sales on Tmall. This could be a great opportunity for British businesses in the outdoor/sporting goods market.

The second group is people who are trying out entrepreneurial lifestyles in the countryside, predominantly by selling produce or experiences to more affluent consumers. Based on her expertise in the industry, Zhang suggests that those who are moving to the countryside to run tourist services such as farm-to-table dining experiences benefit from the ‘rebranding’ of the countryside, and will inevitably create greater revenue for farmers. Rural workers are able to capitalise on the strong purchasing power of urban Chinese far more directly than before. However, this trend also highlights that it can prove to be a challenge making a living in an area where opportunities are fairly limited.

Finally, some young urban Chinese are setting their sights on the countryside to disengage from capitalist competition in the cities altogether, and form self-sufficient communes in remote areas. These individuals are symptomatic of current popular phrases in the Chinese lexicon such as “involution” (originally an anthropological term describing when population growth doesn’t increase productivity or innovation, now used to refer to burnout) and “lying flat” (rejecting society’s expectations and refusing to engage in competition for success at work, among other things, such as not getting married or buying a house). These terms were coined by disillusioned Chinese people who do not wish to partake in the harsh competition found in the city and wish to escape the long hours of white-collar working life.

In a less extreme version of this trend, many young Chinese people are simply discovering and enjoying destinations that have not been heavily developed for tourism, the lack of fellow travellers making up for the lack of facilities.

“Chinese travellers [have had a] taste of the richness of the culture, the scenery and hospitality, and the creativity that designer experiences have in the countryside, and I think this taste can be addictive… Now that we have experienced the joy of not visiting tourist sites, this will shift China’s travel trend,” Zhang explains.

The future of rural travel and tourism

Looking to the future, Zhang sees an increased appreciation of authenticity that will, in turn, become a new luxury. She emphasises that luxury is no longer just based on price point but rather on experience. So-called ‘money can’t buy’ trips are in fact those that are nourishing for the soul, and often the memories made counter the price point.

The episode closes with a final discussion on how international fashion houses are increasingly exploring the outdoors as a marketing theme. The most prominent example of this over the past 6 months has been Gucci teaming up with The North Face. This campaign launched in China with two out of the five global ‘Gucci Wall’ installations being situated in Shanghai and Hong Kong. In addition, in February 2021, Burberry released its campaign for Chinese New Year, focusing on the outdoors and reconnecting with nature and one’s surroundings. However, it is important to reiterate that brands will need to do more than just romanticise the outdoors to engage with and continue to capture the gaze of the Chinese consumer.

Why did China just cut its mortgage interest rate?