The Chinese government forecasts that by 2035, EVs are expected to account for 50% of all new car sales. Although China could face some hurdles in achieving this target, the country is already well ahead of its government’s forecast to reach a 20% nationwide penetration rate by 2025. Further, it is hoped that by 2030, three in five new cars on China’s roads will be powered by electricity instead of fossil fuels.

As a result, China’s EV market is hyper-competitive. Tesla may still dominate at present, but there are an increasing number of popular home-grown brands. The combined sales of Chinese brands NIO, Xpeng and Li Auto are estimated to have reached around 280,075. Although this is still 13% less than Tesla, whose 2021 deliveries more than doubled to 321,000 units, these domestic brands are quickly developing aggressive new expansion models.

“In general, there is a notable preference for international brands of passenger vehicles in China, with 62% of consumers choosing an international option,” David Gregory, China Business Advisor at CBBC, told FOCUS. “However, there is a striking contrast within the EV market where nine of the top ten manufacturers are domestic companies, including SAIC, BYD and GAC Group.” Gregory added that a number of Chinese companies that concentrate solely on producing EVs are emerging, suggesting that China will continue to lead the way not only in terms of market size but also in the development of the EV industry.

“EV brands that make it in China will be well prepared for sale in other parts of the world. The quality of Chinese cars including EVs is, compared to a few years ago, at an extremely high level,” explains Thomas Engel, product launch manager at Volkswagen Anhui.

What new government support is available for EVs in China?

One of the key factors driving the EV market is the slew of local and central government incentives. NEV subsidies were introduced in 2009 to help prominent Chinese EV companies such as NIO and Xpeng to grow quickly. Subsidies not only aided the development of the companies themselves; they also made EVs more affordable for consumers.

However Professor Kent Deng of LSE believes the subsidies are falling out of fashion: “The government provided blanket subsidies to encourage investment in and consumer demand for electric cars over the past 10 years. But the subsidies are on the decline, cut by 30% last year.”

Instead of direct subsidies, China has turned to a market-based approach. In 2017, the government introduced a new policy that asks automakers to trade ‘New Energy Vehicle’ credits. These credits are similar to a reward-based system, whereby for each EV that is produced, carmakers receive positive credits (and vice versa). The scheme is designed to further strengthen China’s growth in the global automobile industry. In addition, the government is hoping to wean carmakers off rebates to foster survival of the fittest in the overcrowded marketplace.

In 2020, the government announced a new policy that called for mandatory emission quotas for internal combustion engines (ICE). China is determined to ensure EV manufacturers are fit for purpose, with the ultimate goal of phasing out ICEs. The impact of these policies remains to be seen, as the reduction in subsidies will inevitably translate to higher consumer prices. Nevertheless, the government is confident that slashing subsidies will have a minimal impact on NEV sales in 2022, which are hoped to reach an estimated 6 million units.

What challenges are facing the EV market in China?

Beijing’s efforts to encourage the purchase of greener vehicles have certainly paid off. Today’s consumers are more willing to purchase an EV, yet they still face some practical drawbacks.

One main drawback is the lack of charging points. Some Chinese consumers have held back from buying a pure-electric car as they are concerned by the inadequate number of charging facilities. Although boasting the world’s largest charging network for EVs with an average of one charging station for every three EV cars, China has not yet reached its ideal ratio of one car to one charger. Indeed, during national holidays, some consumers have faced queues of up to four hours to charge their vehicle on motorways where charging facilities are stretched to the limit.

“Very often, the sale of EVs is connected to the availability of charging infrastructure. And yes, [in China], this can be improved. But once customers make the step from combustible engine cars to EVs, they adjust quite fast and find ways to charge their cars,” says VW’s Engel.

In older neighbourhoods, one of the main challenges is installing charging circuits, as the buildings cannot take large power loads. In addition, many rural areas lack the infrastructure for EVs. Charging points are mainly concentrated in central business districts in top-tier cities, where the commercial returns of running charging units are much higher. The use of EV cars in rural areas is still significantly less than in major urban cities and one of the main questions that needs to be addressed is how to incentivise station owners to invest in ‘low utility’ areas.

Engel hopes that “car batteries become more and more bi-directional. In case of a temporary power loss in a rural area, I see an advantage in being able to use the energy from a car for a house.” 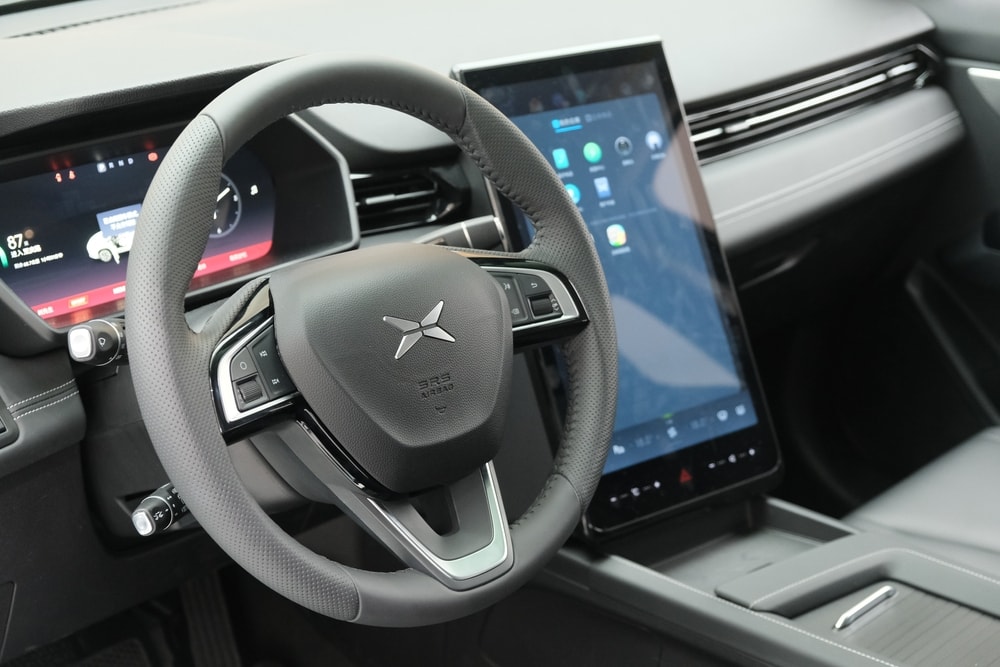 Inside an Xpeng, a popular Chinese electric car brand

In order to further address this issue, the government is requiring all new residential buildings to install charging posts in parking spaces. Policymakers have also launched a New Energy Development Plan and a Technology Roadmap 2.0 to further support the construction of the required infrastructure.

Another challenge is high price sensitivity. China is aiming to scale back price support for consumers because of the improving costs of battery technology. However, there is currently an acute global shortage of key battery components such as lithium, leading to worries about a huge negative impact on the EV market.

Fortunately, China has been investing in battery recycling technologies, and it is hoped this will help to avert supply shortages. Indeed, if battery prices continue to decline in the next five years, EVs could achieve price parity with ICE.

What targets is China’s EV market working towards in future?

At the macro level, the upward momentum of the use of EV cars is helping China to achieve its climate change goals.

“Seventy-two percent of China’s oil use currently depends on foreign imports. So the government has a desire to cut its oil intake to save hard currency,” asserts Professor Deng.  “The promotion of electric cars seems, to a great extent, to be able to foot the bill,” he adds. “The government is also committed to reducing greenhouse gases. The promotion of electric cars now kills two birds with one stone.”

China hopes to cut carbon dioxide emissions to near zero by 2060. With the growth of the EV market, the outlook on the government’s aims and objectives is positive. Another factor underpinning the government’s support for EVs is that it will help to reduce air pollution and reduce carbon emissions. Furthermore, the use of EVs will strengthen China’s technological progress and economy, especially as more European countries look to China to supply their new energy vehicles.

Over the next decade, there is no doubt that EVs are going to become increasingly dominant, but Deng says that “China still has a long way to go — in 2020 China had 281 million cars on road, only 5 million were electric ones, or 1.8%.” As new rules and policies slowly come into effect, it will be worth re-evaluating the EV market as it continues to surpass expectations.

If you are a British company in the electric vehicle industry, call +44 (0)20 7802 2000 or email enquiries@cbbc.org now to find out how CBBC can help you find the perfect partner to support your growth in China.

Mark Xu is CBBC's sector lead for advanced manufacturing and transport in China. Mark can be reached on mark.xu@cbbc.org.cn

Celebrating 50 years of UK-China relations at the ambassadorial level

Where do China and the UK stand...