Home Consumer Cristen Hemingway, great-grandaughter of the famous writer tells all about her new project
ConsumerCulture

Cristen Hemingway, great-grandaughter of the famous writer tells all about her new project

The American Bar in London’s Savoy Hotel has seen American icons such as Marilyn Monroe and F Scott Fitzgerald prop up the bar. The Moon Walk cocktail was created here, the first drink that Neil Armstrong sipped on his return from the moon, and it is also here that Ernest Hemingway spent many an evening with his new lover in 1944, when he was living in London. 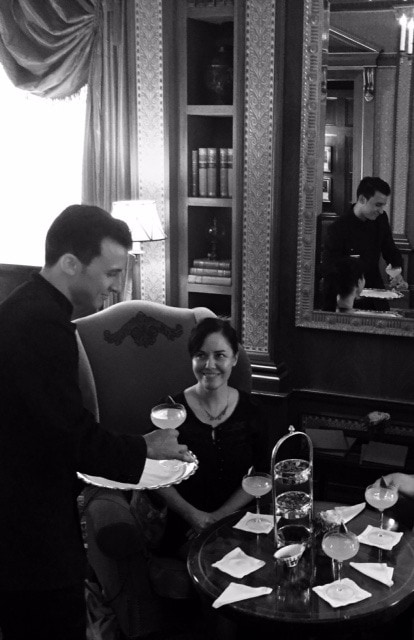 Cristen at the American Bar

So it is quite fitting that I am meeting Cristen Hemingway, the writer’s great-granddaughter in this flamboyant Mayfair bar on a cold winters evening.

“No one knew Hemingway was in London, I didn’t even know he was here,” says Hemingway. It’s actually Cristen Hemingway Jaynes, to give her full name, but I will be referring to her as Hemingway for the rest of this article. It rolls off the page just a little sweeter.

“I’ve been to Key West a couple of times [where he lived and wrote To Have and Have Not] and to Paris [where he wrote The Sun Also Rises in a mere eight weeks] but I had no idea he had come to London, let alone knew about all the things that happened to him here,” Hemingway shares. 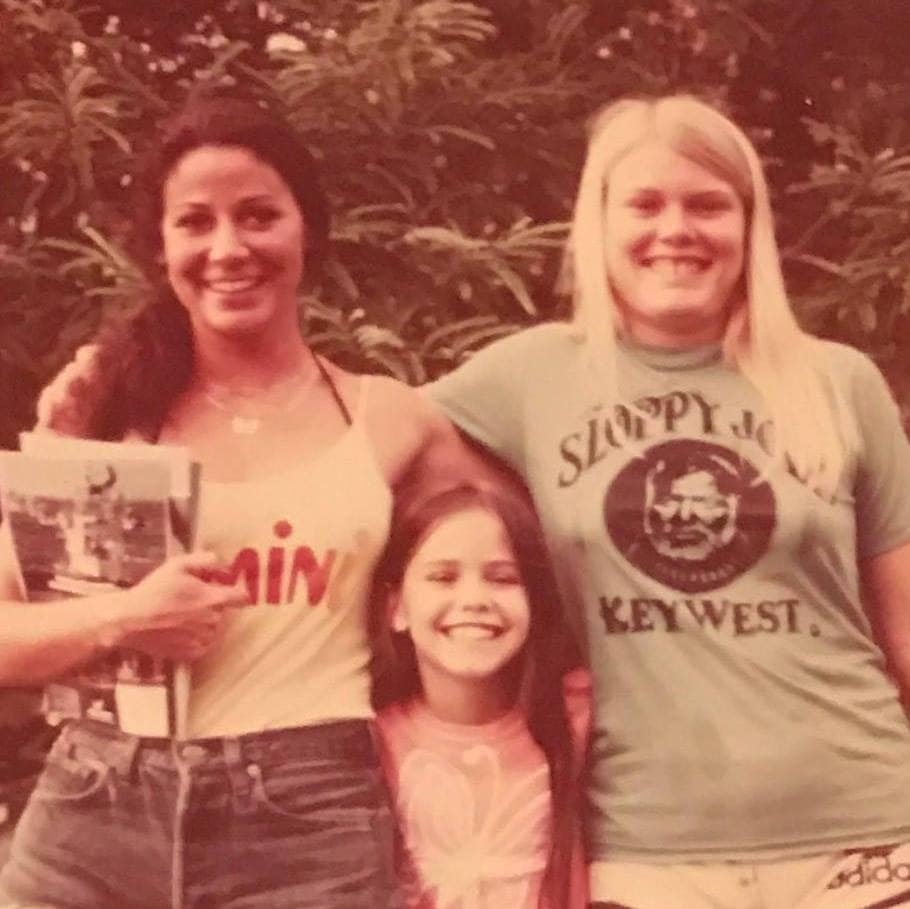 Cristen with her family in Key West

Indeed, Hemingway Senior’s short time in London was action-packed. He was in a car accident that sent him to the St George’s Hospital, now the Lanesborough Hotel, for a short while. He hung out with a young Roald Dahl and drank with the photographer Robert Capa, and was aboard a ship as a journalist during the D-Day landing (although he did not join the troops; he was regarded as “precious cargo”). It was also in London that Hemingway met his fourth wife Mary Welsh, which cemented the end of his tumultuous marriage to the war correspondent Martha Gellhorn. 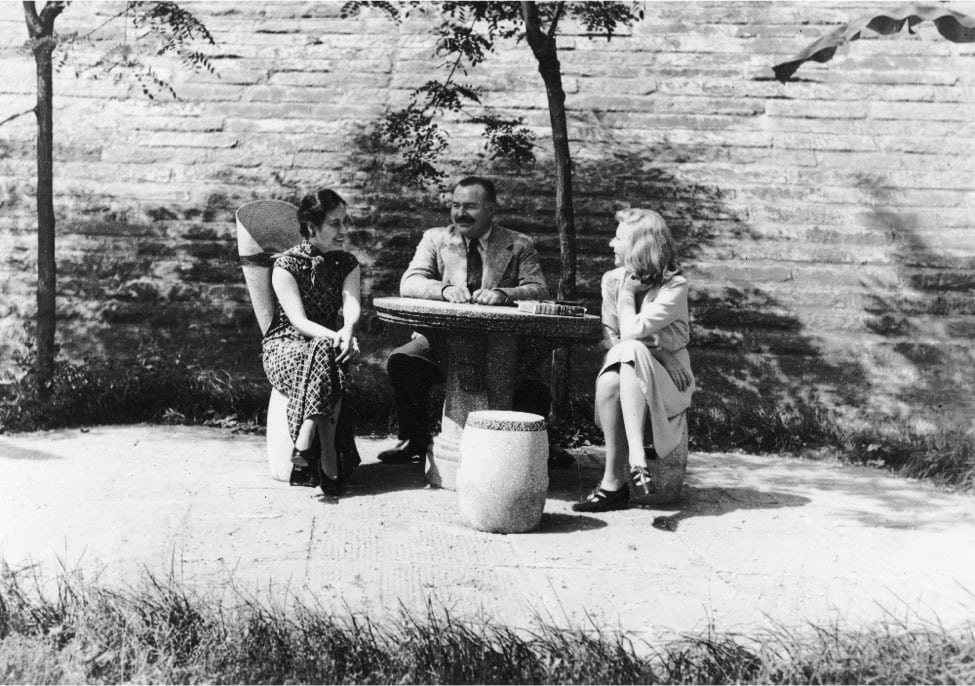 Hemingway with his wife Martha Gelhorn in China

If it wasn’t for Gellhorn then Hemingway may never have made it to China. In 1941, just after the couple had married, Gellhorn took him away for a ‘100-day Honeymoon’ to Hong Kong and China. He was reported to very much have enjoyed his time in Hong Kong, drinking with writers, tycoons, spies and mercenaries, and introducing the colony to the Bloody Mary.

The couple then travelled into China where they visited Chongqing and met with General Chiang Kai-shek and his wife Soong Mei-ling although the two couples weren’t particularly enamoured with each other. Gellhorn said that the general looked “embalmed” and Madam Chiang didn’t beat around the bush when she told Gellhorn that, “China had a great culture when your ancestors were living in trees and painting themselves blue.” A clandestine meeting with the Communist leader Zhou Enlai seemed to go much better with Gellhorn commenting that he was “the one really good man we met in China”. Overall, however, their impression of China was that it was squalid and destitute. 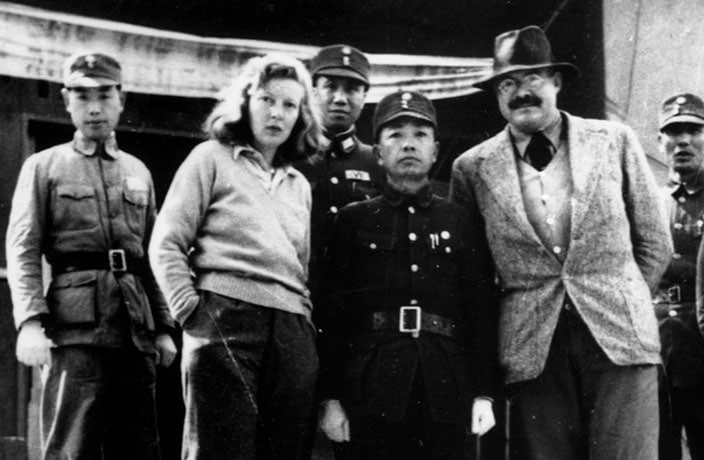 Whilst Gellhorn was on assignment for Colliers magazine, Hemingway was pretty much along for the ride. Experts such as Pete Moreira, who wrote a book about Hemingway’s time in China, claimed his role was to “surreptitiously gather[…] intelligence for the [American] government.” Whether he was acting as a US agent or not, one thing he did do was live up to his reputation as a hard drinker – at one point he reportedly drank a dozen Chinese soldiers under the table.

China’s interest in Hemingway has never wavered though and Chinese President Xi Jinping is a Hemingway fan himself. The Old Man and the Sea “left a deep impression” on him he said.

“When I visited Cuba … I visited the pub Hemingway often went to and ordered his favourite drink – rum mixed with mint and ice,” he told an audience during a 2015 visit to the USA.

With such interest in the writer from China, the younger Hemingway is now producing content for an app called the Hemingway Trails. “They show the history of the places he went. What he did there, and where he drank – though he pretty much drank everywhere he went,” she laughs.

The Hemingway Trails are part of the Global Trails app, and will feature all the cities that Hemingway spent time – Paris, Madrid, Havana, London and many more. Featuring videos, audio tours and in depth guidebook materials, the apps not only provide historical information but interactive quizzes and games for users to learn more about particular buildings, people and areas.

Hemingway reveals that she interviewed many other experts and fans of her great-grandfather in order to learn as much as she could about him. As well as talking with writers like Jay McInerney and scholars such as Ann Maria Daniel, she also went to Seville to interview Tatiana Becka Osbourne, the great granddaughter of Juan Belmonte, the bullfighter and best friend of Ernest. “We now hang out on our own,” says Cristen. “And we’re going to a bull fight together in April.” Best friends – four generations apart.

The app is aimed at Hemingway fans but also for people that like location-based guides that keep them entertained. With over a 100 downloads coming from China every day already, the team have decided to translate the app into Chinese too.

As we drink our tea in the American bar (sadly no daiquiris in sight) Cristen explains her family tree. “Ernest’s second wife, Pauline, had Gregory who is my grandfather. His daughter, Lorian Hemingway, is my mother and she has a biography out called ‘Walk on Water’.”

Hemingway now lives in London with her musician husband and has recently finished a master’s degree in creative writing from Birkbeck. Previously, she published a book of short stories, and is now working on a three-part work of fictionalised autobiography.

“It’s about a Greyhound bus journey I took with my uncle Edward,” she says. “He’s also a Hemingway. The first part is from Montana to Key West in 1993, and then an Amtrack journey from Chicago to Memphis. It concludes with a Eurorail journey from Paris to Prague to Italy.”

Currently working on the second part of the trilogy, Hemingway reveals that she’s very hard on herself because of her famous ancestor. “For a long time, I used my dad’s name because the Hemingway name was a lot to live up to. I had to feel like I was my own writer before I could use it but now I feel much more comfortable with myself as a writer.

Having a Nobel laureate as a relative is certainly a lot to live up to and she says that many family members have struggled with the association. Her family’s troubled past has seen many of her relatives suffer with depression and alcoholism, with some taking their own life.

“I constantly compare myself to him; not necessarily to his style, but to his level of success. But I am lucky because I am further removed than my mother and grandfather were. Developing your own identity when you have a relative like that doesn’t happen naturally – you have to fight for it. And I don’t think they necessarily did that successfully.”

Whilst Carsten aspires to Tolstoy and believes she has “that big novel” in her, she enjoys working on auto-fiction. “It’s loosely based on your life so you don’t have a plot.”

The move from writing short stories to a novel is difficult she says because a novel “is building a whole life, whereas a short story can be just a moment that has affected you.”

As a student back in Key West, Carsten bumped into the author Shel Silverstein in a copy shop who told her that she had to write every day. “I didn’t heed that advice for years,” she says. But now, it seems, she certainly is.