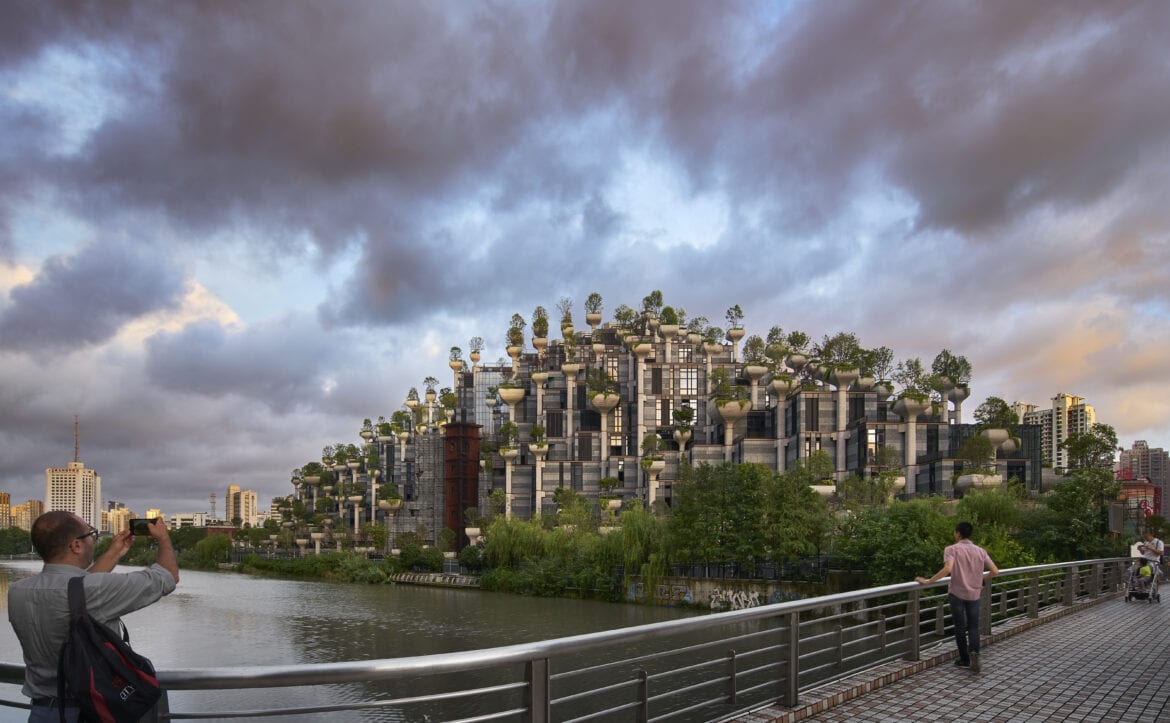 The renders of the 1000 Trees Project under construction along the Suzhou River in Shanghai look stunning and extremely ambitious. Can you describe the project?

The project has the shape of two mountains topped by living pillars. Each pillar will contain plants, hence the name ‘1000 Trees.’ There are two phases of the project: Phase one is the west mountain, which is about 60 meters high and is going to open next year, around Chinese New Year.

The east mountain is the second phase, and is 100 meters high. They’re probably going to commence piling this month. It’ll be quite interesting to see the first phase opening while the second phase is still under construction. 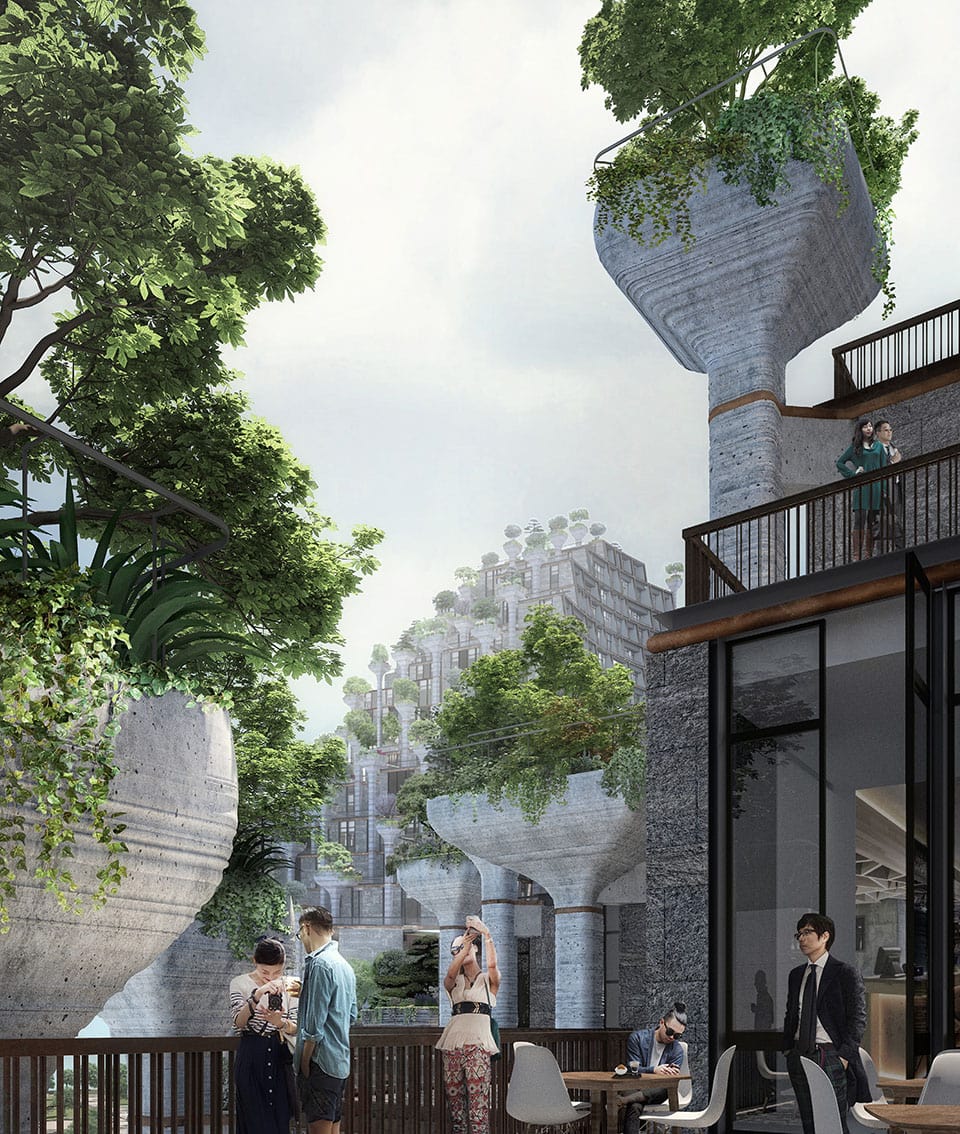 The project will have living pillars filled with plants

What will the spaces contain?

Well, the first phase is predominantly retail and food and beverage. The second phase is going to have 50,000 square meters of workspace and a 200-room hotel. There’s this very dramatic bend of the Suzhou Creek which we are turning into a riverside park.

How did you come up with the idea of such original buildings, topped by pixelated, elevated pillars?

The idea came up as a natural response to the site. It was the area that inspired us: Imagine a brownfield site with a few historic heritage buildings, right next to this incredible Arts District, the M50. Plus we had the gift of this park running all along the Suzhou Creek. We wanted something that unified the whole site together, although technically the M50 isn’t part of our site, in our minds it is.

Embedded in the south facade there is a huge open-air art wall, which used to be along Moganshan Road. People would come and paint from all over the world, so it was a very special place for the city. We’ve worked with artists to create new pieces of art that can then be positioned within our south façade. It will be a bit like keeping the wall.

Initially, we had permission for a very classic podium, two towers, with a typical building form. All you could see around the area were copycat residential towers. We felt compelled to create some sort of contrast to the existing urban landscape.

Height restrictions also helped define the project. On the west, we could build up to 60 meters, and up to 100 meters on the east. That is how we came up with the idea of a park rising up to these two peaks, from which the park just slopes down.

And the more we worked on it, the more we developed this pixelated language. We created a grid that encompasses the whole site. Then, on every point of the grid, we put a piece of the park. And that’s how we came up with the idea of 1,000 Trees, of creating these elevated pops.

Also, green roofs usually have the problem of being very heavy, and they lower the floor to ceiling height inside, so placing the landscape right on top of the column is the most structurally efficient solution, which frees up all the roof space to be used as terraces.

We were able to create 1,000 large terraces as well, measuring nine by nine metres. The retail units will have their own outdoor terraces, the restaurants can spill out. 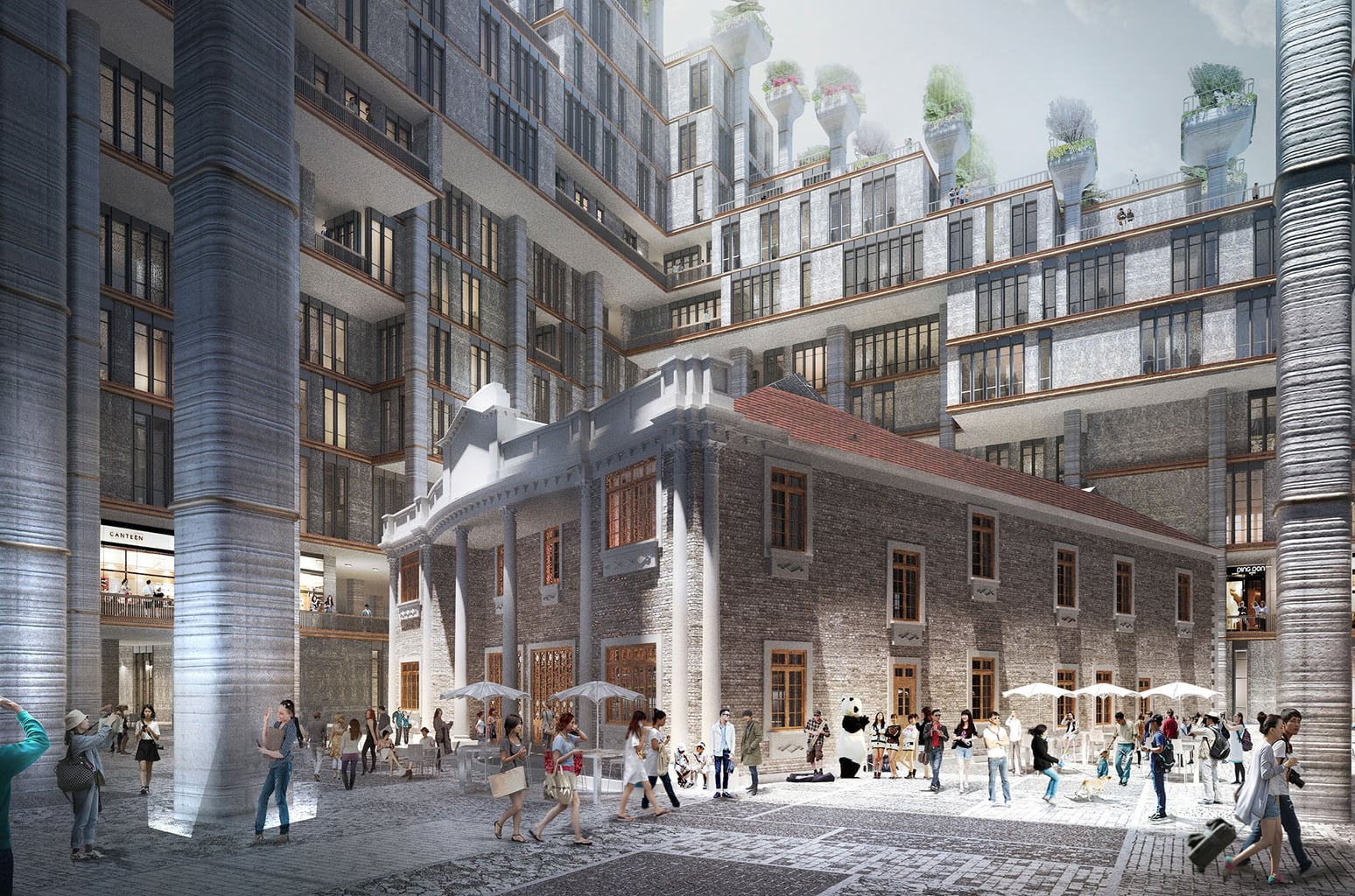 What was the biggest difficulty you encountered working in Shanghai?

Working during and after the lockdown due to the coronavirus pandemic has definitely been the biggest challenge. There’s been nothing quite like this. Not being able to go to a physical meeting, not being able to be in the same room, always seeing things on footage…

Our site architects, who are based in Shanghai, are doing site visits at a distance. That’s only commenced in the last couple of weeks. As a lot of meetings have resumed in the clients’ offices, they all wear masks. Everybody’s very vigilant about lift buttons and are taking it incredibly seriously. As long as this is carried out safely, we are happy, so we are fine with projects taking a little longer to complete.

We’ve been seeing how they would have responded to working under lockdown conditions before we had to. We watched our colleagues doing video calls with their children appearing in the background. And then, a month later, here we are. 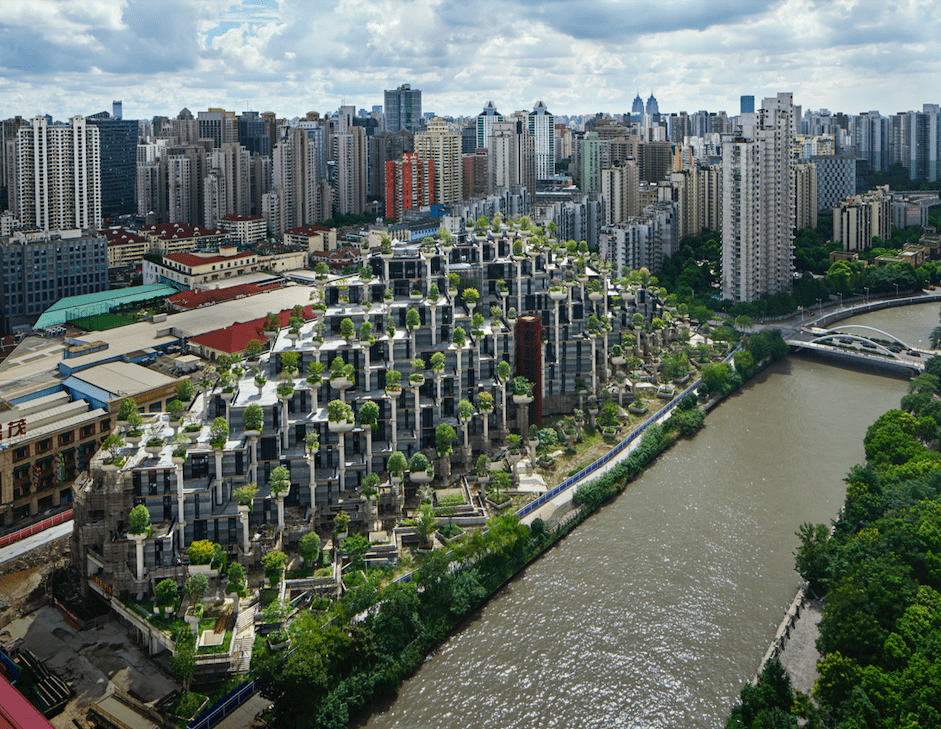 How have you adapted your way of working with China during the pandemic?

Well, we’ve always had a connection over video call. It feels like we’re just that little bit more connected now because everybody’s doing it. During the lockdown in the UK, we’ve had a couple of competitions that we’ve been doing in China. Taking the design process remotely and everybody sketching on-screen has been pretty interesting. Bizarrely, it’s been quite efficient, because everybody can just work in their own space and in their own time.

Do you have any plans for China in the future? And what are your expectations for this market?

What we’ve seen most recently is that a lot of competitions focus on bringing back to life some of China’s industrial heritage, such as factories or grinding mills. That’s something that we’re very aligned to. In South Africa and the UK we refurbished a distillery and other heritage buildings. It is something we’re very passionate about, especially because of sustainability.

I think in China in the next few years there’ll be some really interesting sustainable projects coming out because they can potentially leapfrog into the future. They can see mistakes that we’ve made and skip them and move straight to the next phase. We’re very excited about projects where environmental agendas are high on the list of priorities.

Besides sustainability, there is craft – there is a resurgence of craft. What we’ve found working in China is incredible access to makers and to materials. On the contrary, in Europe, everything is imported. In China, we always try to talk to the people who are actually producing materials. In a country like China, where things are produced on such a vast scale, we’re always looking to bring forward the idea that there can be individuality and personality in the production of materials. Craft-based influences are the reason why we love working in China. Besides sustainability and craft, the third most significant trend we have identified in China is that of wellbeing and health. This is especially important in the new age of the pandemic: having good public spaces is more critical to our lives than ever.

You were mentioning materials. What do you think is the best project when it comes to the way materials have been used?

For us, it’s always about a level of detail and some kind of richness and texture. As we were looking at doing a project in Zhengzhou recently, we looked into the history of an ancient iron pagoda in Kaifeng, a city to the east of Zhengzhou. Made of bricks clad in iron, it almost looks like a metal pagoda. Imprinted into every panel are ancient texts and fantastic figures. It’s inspiring to see that level of detail and craftsmanship.

More locally, the 1,000 Trees team were inspired by the Moganshan Mountain Retreat. 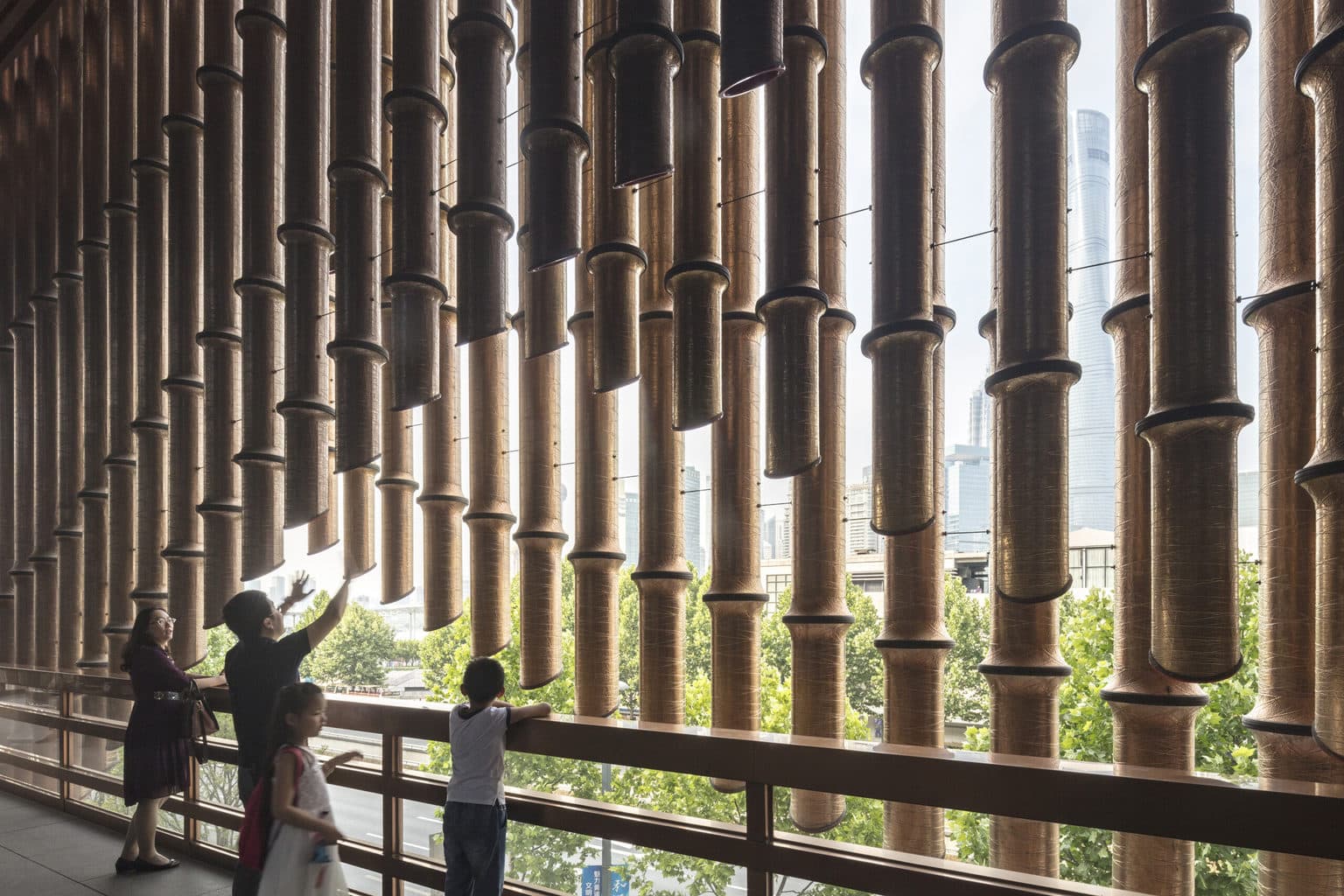 The 1,000 Trees team were inspired by the bamboo forests at nearby Moganshan

Has working with a different the culture changed your way of dealing with all projects?

Did you have to adapt your style to Chinese tastes?

Not really. We felt like we were understood there. The British Pavilion, which we designed for the Shanghai Expo ten years ago, was such an important project for the studio. There was a worry that people wouldn’t get it. Instead, they got it quicker and better than everyone else. Before we knew it, they had a nickname for it, they called it “The Dandelion.”

It was such a special project for us. It’s the smallest, yet the most extreme and memorable. As a studio, it meant so much because it opened us up internationally. From that project, we were invited to do ambitious, interesting things. One was the Bund Financial Centre, for which we collaborated with Foster & Partners. Then came 1,000 Trees.

I think The Dandelion has been our best project in China so far, but I hope 1,000 Trees will be our next best project. 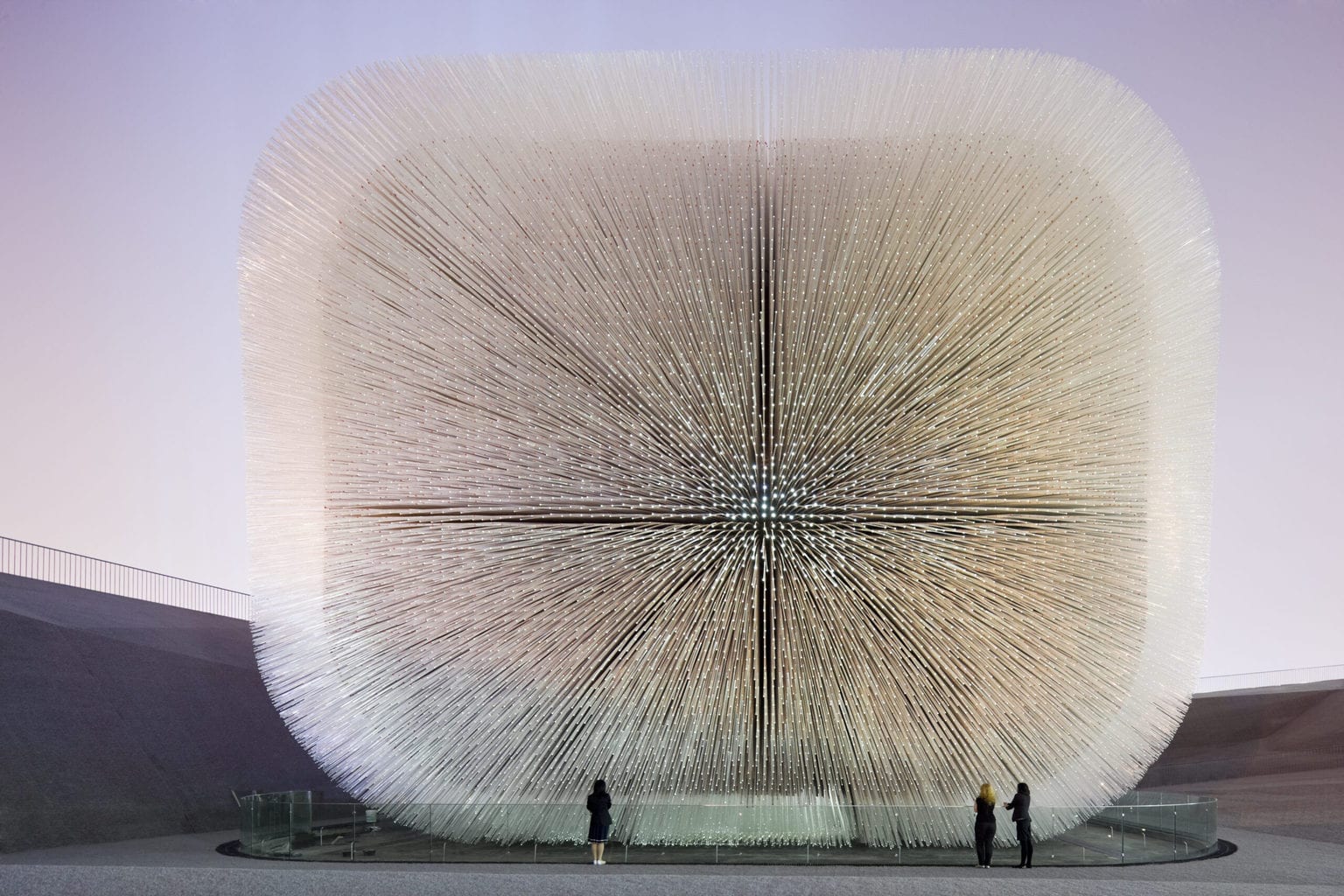 Heatherwick Studios designed the British Pavilion at the 2010 Shanghai Expo

What trait do you think made the Chinese audience like what you do?

I wonder if it’s about our confidence and our ambition to do things. In all the projects that came through there has to be real confidence to commission something so different. We do things wholeheartedly and our clients are aligned with this. That’s why we would love to continue our relationship working in China.

Chinese people are entrepreneurial, so ambition and confidence must have resonated with them. Do you think that this spirit makes projects go faster than in Europe?

Well, like in the case of 1,000 Trees, sometimes we come up with a design, and it’s commissioned before there is a physical mock-up. And you could never commission anything that quick usually, but they’ve done it. It still needed some adjustment, but the passion was there.

There are two sides of the coin, though. While some things are incredibly fast, some others have gone more slowly – partly because of regulation changes. Maybe something is approved at one point, and it might change in the future. We’ve found that quite difficult to navigate. But all in all, working in China has been a great experience. 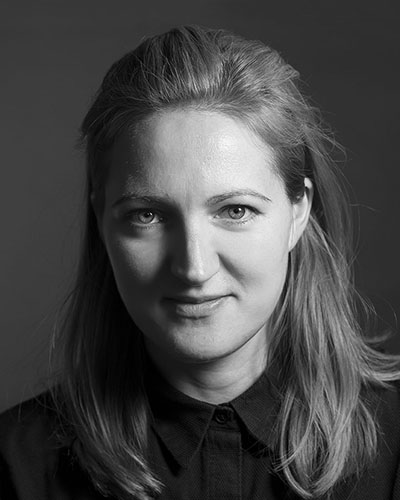 You seem to love Shanghai and China in general, where does this love come from?

I think they love us. It’s like a mutual thing that we feel because it’s a place where we can do creative things. It feels like anything can be possible there. I don’t think that you get that feeling everywhere. That’s something we’re very, very drawn to. And I also think due to the cultural history, all the layers of culture that come into daily life. For example, the traditional ground-breaking ceremony. Learning about that culture and being part of that is very special as well.

What is corporate intelligence and who needs it?