China’s role in the global economy has evolved faster than that of any other country in the world. These five new books try to explain the challenges China faces in its endeavour to become the world’s largest economy, and how to make sense of its presence in the context of its past. By Clizia Sala

The Myth of Chinese Capitalism, by Dexter Roberts 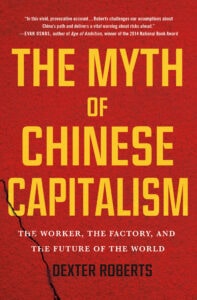 Roberts’ fascinating book paints the picture of a deeply imbalanced society, which is sometimes overlooked by foreign investors attracted by the huge appeal of half a billion middle-class consumers.

Through this detailed report, journalist Dexter Roberts shows how foreign investors often chose to ignore ordinary workers. Far from buying organic food, fast cars and fancy apartments, the lower social classes constitute around 60% of the population and earn an average of between £2 and £10 per day.

In ‘The Myth of Chinese Capitalism,’ Roberts vents their grievances. He follows the lives and hopes of workers and small entrepreneurs in poverty-stricken regions of Guizhou, and in the manufacturing heart of Guangdong Province: Dongguan.

China’s local administrative system (known as the hukou system) prohibits many workers from relocating freely within the country, and hinders social mobility, perpetuating inequality and raising workers’ dissatisfaction. Without social mobility, Roberts argues, the economic growth of the whole country is at risk.

This well-researched volume brings to life the problems migrant workers face in China today. Roberts lucidly highlights a conflict-ridden system that poses a severe challenge to the country’s forthcoming growth.

Tech Titans of China, by Rebecca A. Fannin, China’s strong entrepreneurial culture has been key to the country’s technological development in the past two decades. Its competitive spirit and inexhaustible work ethic have transformed it from a land that used to play catch-up with the US, to a country that is leapfrogging the West. In ‘Tech Titans of China,’ pioneering journalist Rebecca Fanning provides the reasons why, as one of her sources tells her, “China is going to eat Silicon Valley’s lunch.”

Fanning focuses on key players and companies in sectors extending from the sharing economy and e-commerce, to AI and social media platforms. She spent several months interviewing China’s top tech gurus – the equivalent of Steve Jobs, Jeff Bezos and Bill Gates. The book is the result of a well-conducted exploration of China’s tech ecosystem, where the author waded through tech incubators, accelerators, workshops and networking events. Fanning’s argument is that China’s disruption of the US’s leadership role in tech should prompt companies and businessmen in the US to counter it, and fast.

A must-read to understand China’s technological advancement, the book provides fundamental context on how its tech sector reached supremacy, without forgetting to cast an eye on what comes next.

In ‘Tech Titans of China,’ pioneering journalist Rebecca Fanning provides the reasons why, as one of her sources tells her, “China is going to eat Silicon Valley’s lunch.”

High-Speed Empire: Chinese Expansion and the Future of Southeast Asia, by Will Doig Travelling through China only a decade ago required ingenuity and patience, but in little more than a decade, China has built an extensive network of incredibly comfortable and convenient high-speed trains. According to Doig, Beijing’s infrastructure ambitions have helped it overcome its frontiers. And following the push of economic agreements of the Belt and Road Initiative, those ambitions continue to grow with projects such as the Pan-Asia Railway from Kunming, in China’s southwest, which spans across Singapore, Laos, Thailand and Malaysia.

Just as countries around the world welcomed the Belt and Road Initiative with caution, Southeast Asian countries are facing a dilemma. Their leaders “both yearn for and fear” Chinese investments. The choice is between allowing “the heavy hand of China” in – through Chinese investments – or defending their sovereignty.

Most of the evidence Doig provides is anecdotal – stories from interviews and experiences on his travels to the countries affected by China’s Belt and Road ambitions. These include the border town of Boten in Laos, which resembles an Asian Las Vegas; the revived Bandar Malaysia project, which is a contentious property development in Kuala Lumpur; and Singapore’s Forest City, a group of islands aimed at Chinese expat buyers. A quick, interesting read to get a deeper grasp of China’s “railroad diplomacy.”

China, Trade and Power: Why The West’s Economic Engagement Has Failed, by Stewart Paterson In his book ‘China, Trade and Power, Why the West’s Economic Engagement has Failed,’ Stewart Paterson argues that Western countries need to further put pressure on China to open up and engage in authentic political reforms rather than the “indulgent engagement attitude” that liberal economies have displayed so far when it comes to China.

Paterson considers China’s entry to the World Trade Organisation as the key turning point. By granting access to the WTO, he argues, the West hoped to trigger a political change in China. Not only did that not occur, but unfettered access to global markets also enabled China to gain a further advantage whilst playing by the rules of the liberal market.

Paterson sometimes overstates his case but it can’t be denied that China’s growth following access to the WTO has rapidly influenced the political economy in the West and rewritten the geopolitics not just of China but of the world. If Paterson identifies China’s accession to the WTO as a defining moment, Elizabeth Economy treats the ascent to power of Xi Jinping as the key to interpreting China’s modern history.

The author details the transformative impact of Xi Jinping’s policy in China and abroad. She describes the ambitious and expansive moves President Xi is adopting overseas and the decisive approach he is implementing within the country’s borders. Underlining these traits of Xi Jinping’s policy, Economy provides an informative explanation of what she calls the “Third Revolution”.

China’s current strategy is reversing the trend towards an economic opening and an acquiescent foreign policy that had been put in motion by Deng Xiaoping’s “Second Revolution” 30 years ago.

The book spots the tensions, successes and shortcomings of President Xi’s first five years in office, and provides suggestions to Western countries on how to navigate their relationship with China in the years to come.

Economy’s study of change in the field of international policy adds a fresh insight and nuance to the encompassing narrative of China’s political transformation. Essential reading to understand where China is going in terms of domestic and international policy.

What’s the minimum wage in China?