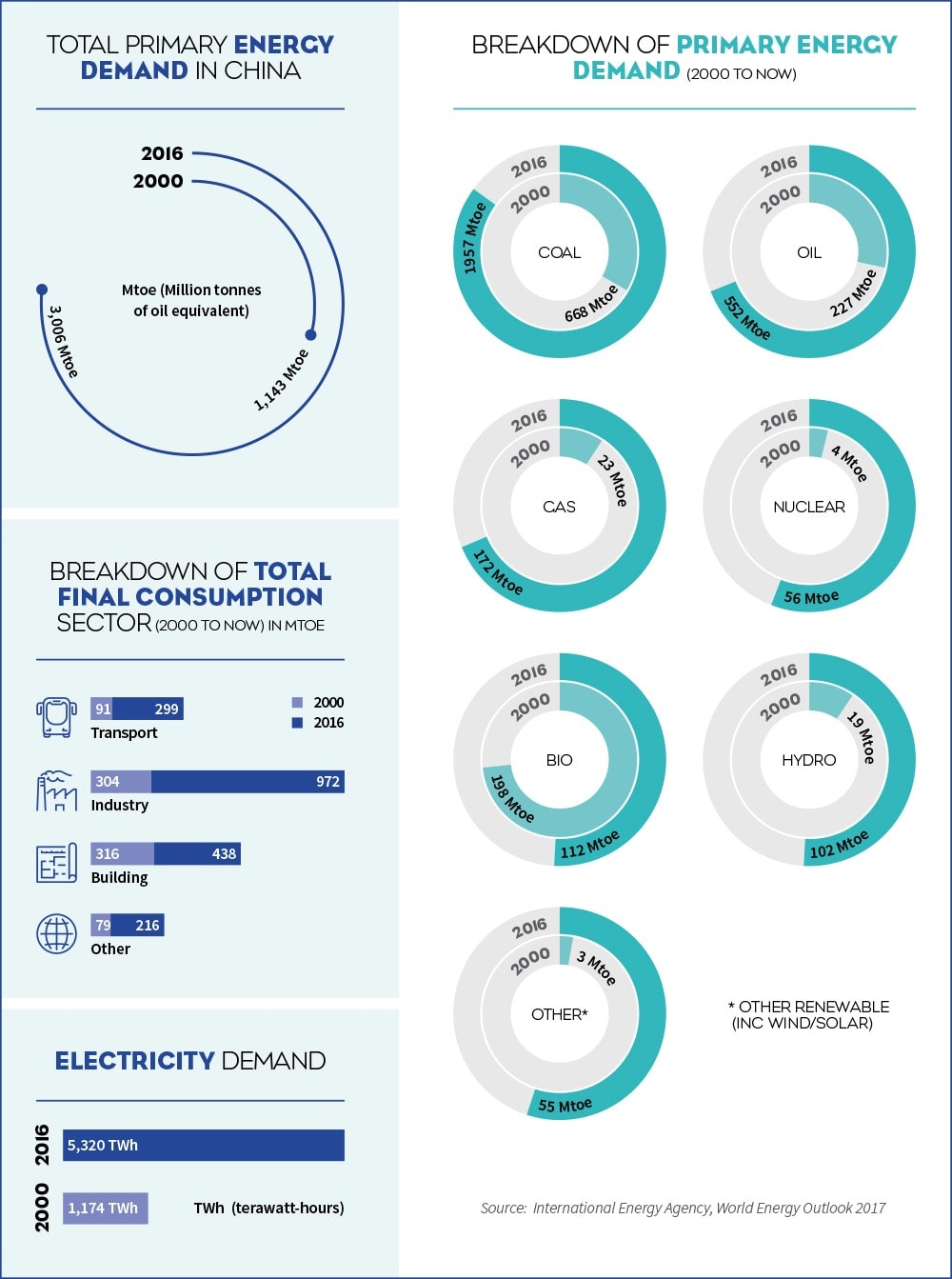 China is switching to renewables, especially wind and solar, as well as natural gas, to meet growing energy demand. Coal demand has probably peaked, although coal will continue to be the largest element in China’s energy supply for several decades to come. And just as important as the switch to cleaner energy sources will be a massive drive to improve energy efficiency, as well as environmental regulation more generally.

China has embarked on a major programme of investment in renewables. In 2016, according to the International Energy Agency (IEA), China was already the world’s largest market for renewables, accounting for 41 percent of all new capacity. Investment in China’s energy sector in 2016 was almost one-fifth of the estimated world total of $1.7 trillion. Most of this was in renewables and in the electricity transmission / distribution that will be needed to deliver the power where it is needed. The IEA predict that Chinese investment in renewables will be around $80 billion per year to 2040, and investment in distribution and transmission only slightly below that. These are vast sums by any standards. Gas is also expected to play an important part in China’s new energy economy. Gas emits about half the greenhouse gases of coal and is far less polluting of the local atmosphere. So switching from coal to gas, especially for small industrial and domestic use, can contribute to improving air quality. China is expected to become a major importer of natural gas in the coming decades.

China has embarked on a major programme of investment in renewables

Just as important for the environment, China has been running a programme to improve energy efficiency that now covers over 16,000 enterprises. The energy intensity of the economy, that is to say energy demand per unit of GDP, is also declining as China re-balances away from heavy industry. According to the IEA, China achieved an impressive reduction of 5.7 percent in energy intensity in 2016 compared to 2015. They estimate that again until 2040, China will spend around $90 billion a year on improving the efficiency of buildings, transport, and industry.

As car ownership grows, China is on course to become the world’s largest oil importer, and oil security is an increasing factor in China’s geopolitics. However, China is also the world’s largest market for electric cars. When will this electrification start to moderate the growth in oil demand? In the IEA’s projections oil demand plateaus from about 2030.

Neil Hirst’s is the author of ‘The Energy Conundrum: Climate Change, Global Prosperity, and the Tough Decisions We Have to Make’, published by World Scientific Publishing Company. It is available now on Amazon.