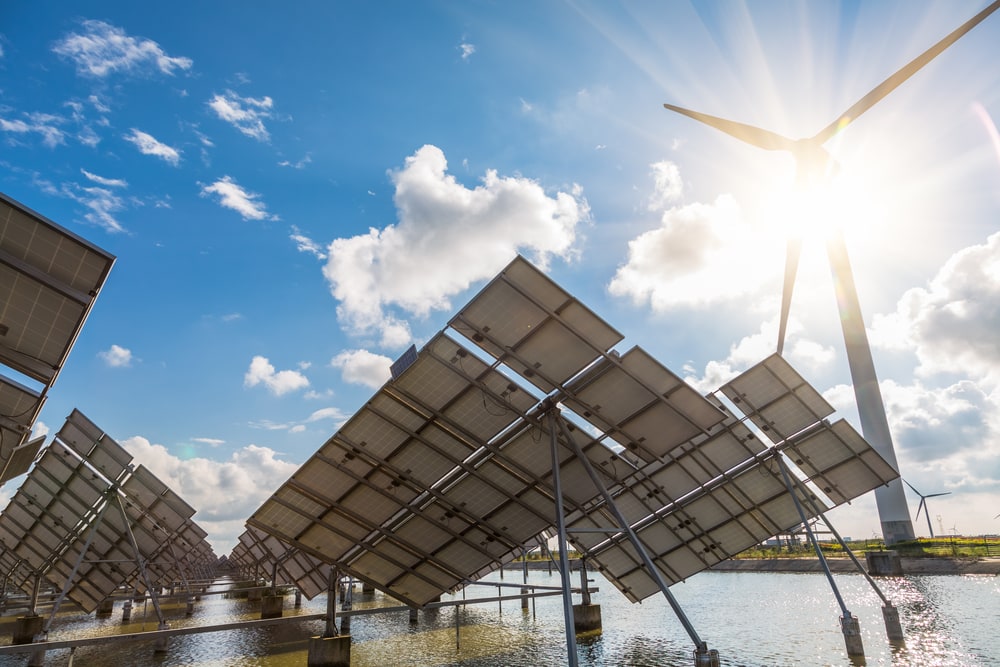 Cheap energy has allowed China to emerge as a leader in green technologies. But with intense heatwaves causing water to become scarce this summer, Torsten Weller argues that fundamental adjustments will be needed to ensure that net zero goals can be met

Rising energy costs are probably one of the most pressing issues in current UK politics. And while the spike in electricity and heating bills is probably temporary, electricity prices might well play a much larger role in economic growth in the coming years and decades.

The main reason for this is climate change and the global race for net zero targets and technologies. A little-known feature of the transition from fossil fuels to renewable energies and carbon neutral industries is that a lot of the changes will require more, not less electricity.

Consequently, cheap power might well be the most important variable determining not only the success of a clean energy transition, but also which countries are best placed to benefit from the opportunities of the net zero economy.

This brief looks at the importance of electricity for businesses in the coming decades, in particular focusing on the prospects in both China and the UK.

The net zero goals that were adopted at last year’s COP26 Summit in Glasgow will have far-reaching consequences, the most crucial of which might well be the growing importance of electricity costs for businesses.

Take the steel industry for instance. Reducing carbon emissions – for example by switching from blast furnaces (burning iron ore) to environmentally friendlier electric arc furnaces (which use scrap metal) – would require up to five times the amount of electricity currently used.

In a globalised world, this also means that electricity costs will be a key factor for determining where green technologies and businesses can thrive – and where they can’t. In a world where China is seen as a ‘systemic competitor’ – according to the now widely accepted notion put forward in last year’s Integrated Review — the key metric could be electrification rather than computerisation.

China’s rise and the role of cheap electricity

Looking back at four decades of Reform and Opening Up, the ability to provide cheap electricity to businesses and households has been one of the major reasons for China’s rapid economic rise. According to the World Bank’s 2020 Ease of Doing Business report, electricity costs as a proportion of GDP per capita were almost zero.

Based on one estimate, Chinese electricity costs for businesses in December 2021 were £0.078 per kWh – nearly three times less than in the UK, where the cost for the same amount of electricity was £0.216. Unsurprisingly, China has emerged as a global leader not just for attracting power-intensive industries, such as aluminium, but also green technologies like EVs and renewable energies. Domestically, China is set to sell six million EVs this year, roughly the same number sold last year … worldwide. 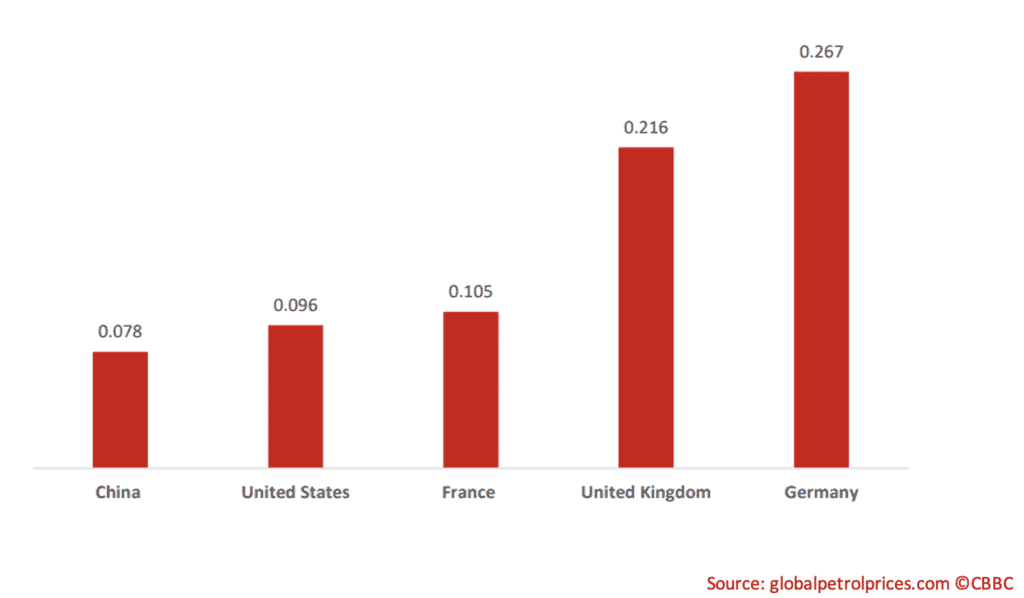 China has also emerged as one of the world’s largest investors in green energy. Last year, its investment in green energy projects accounted for over 30% of global spending on renewable energy sources. By comparison, both Europe and the US spent far less, according to the International Energy Agency.

But despite being a poster child for renewable energy and still having one of the lowest electricity costs among major economies, China too is worried about the increasing dependency on cheap power. As Peng Wensheng of China International Capital Corporation (CICC) – a Chinese investment financial services company – recently wrote in Caixin, the energy crisis in Europe, and especially in its industrial powerhouse Germany, has underscored the importance of stable prices for China’s own manufacturing sector.

To be fair, Chinese electricity prices have remained remarkably stable compared to Europe. Prices for businesses in Beijing were around £0.099/kWh, only 27% higher than the national average from last December, according to data aggregator CEIC.

China’s energy imports are also more diversified than Europe’s. Australia, China’s largest source of natural gas, only accounted for 25% of its external supply in 2021; Russia for only 5%. Europe, on the other hand, imported nearly a third of its gas from Russia.

But even so, China faces its own dilemmas. First of all, Beijing also wants to achieve net zero. In a televised speech at the UN General Assembly in 2020, Chinese President Xi Jinping declared that China wants to reach a peak in greenhouse gas emissions by 2030 and carbon neutrality by 2060. These ‘double targets’ require a fundamental transformation in the country’s energy mix.

In 2020, 64% of the country’s electricity still came from coal-firing plants. But that is not all. The second largest source – hydropower, accounting for roughly 17% of China’s power generation in 2020 – has proven to be problematic, too. Hotter, drier summers and weaker rainfall have forced hydropower stations to curb output, leading to several power cuts in southern and central China.

Low water levels might also affect nuclear power plants — another green energy source. These plants rely on access to fresh water to cool their reactors. But with water getting scarcer during the summer months, it’s likely that they will also need to be shut down temporarily. France, for example, had to halt several reactors due to the current high temperature in adjacent rivers. China, too, wants to expand its nuclear power sector with at least three reactors planned near crucial waterways in southern China. But with the consequences of climate change becoming ever more apparent, these plans might have to be revised. 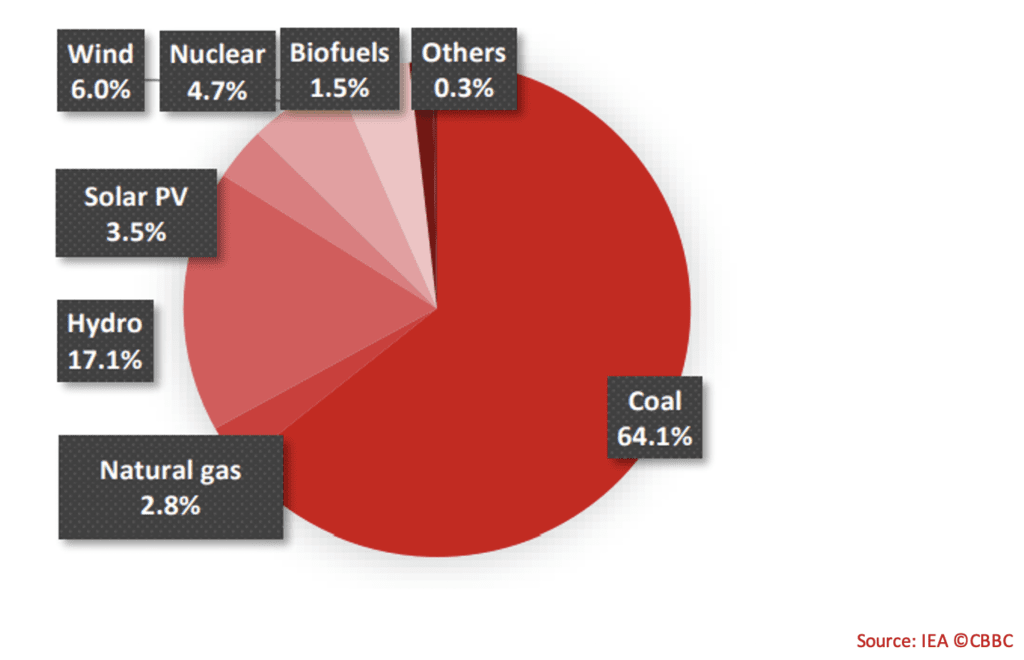 Sources of electricity in China (2019)

Additionally, China has undertaken several steps to reform its electricity pricing system which, in the short term, could increase the cost of electricity. Obviously, the main objective of the reform – which aims to replace the current fixed tariff-based system with a market-driven one – is to make energy costs more responsive to fluctuation in demand and to create incentives to save electricity and invest in energy-saving technologies. It also wants to make polluting energy sources such as coal more costly compared to renewable alternatives such as wind and solar.

While the reform is both necessary and well-intended, it could pose a risk to China’s own net-zero timetable. The dilemma between market driven electricity prices and the growing demand for cheap and reliable electricity might force policy makers to make difficult choices.

As the consequences of climate change become clear, the need to provide stable and affordable electricity will be a major challenge for policymakers around the globe. Countries like China, that have managed to attract businesses with cheap electricity costs, face similar challenges as those with more expensive costs.

Some effects of global warming, such as hotter and drier summers, have also exposed the vulnerabilities of power sources relying on sufficient water supply, notably hydro and nuclear power. Expanding water-neutral renewable energy sources and expanding grid and storage technologies which allow electricity to be delivered across long distances will be one of the top priorities for governments with large industries.

Cheap electricity has helped China become a leader in the expansion of renewable energies and green technologies, but the extreme reliance on coal and water power poses its own risks for the country’s race towards net zero. Fixing these problems will be crucial, not just for the green transformation of the Chinese economy, but also for the chance for other industrialised economies to meet their own targets.

If you are a British company working in the energy sector, call +44 (0)20 7802 2000 or email enquiries@cbbc.org now to find out how CBBC’s market research and analysis services could help your business thrive in China.

Importing from China: How to ship products and navigate customs