How 5 brands showed love for Pride Month in China

How did Coca-Cola, Levi’s, UGG and Absolut celebrate Pride Month in China, where attitudes towards the LGBTQ+ community are still conservative? And why did they launch their rainbow-themed campaigns a month early?

Due to sensitivities when it comes to the LGBTQ+ movement in China, Pride campaigns are less widespread and are generally only braved by multinational companies. It is also rare to see the LGBTQ+ community feature in campaigns throughout the rest of the year. Any references keep the lines blurred between romantic same-sex love and friendship, as is true of TV shows and films, even in the popular new genre of ‘boy love’ dramas.

With this in mind, Dao Insights explores how brands have been showing their support for the LGBTQ+ community during this year’s Pride month in China. 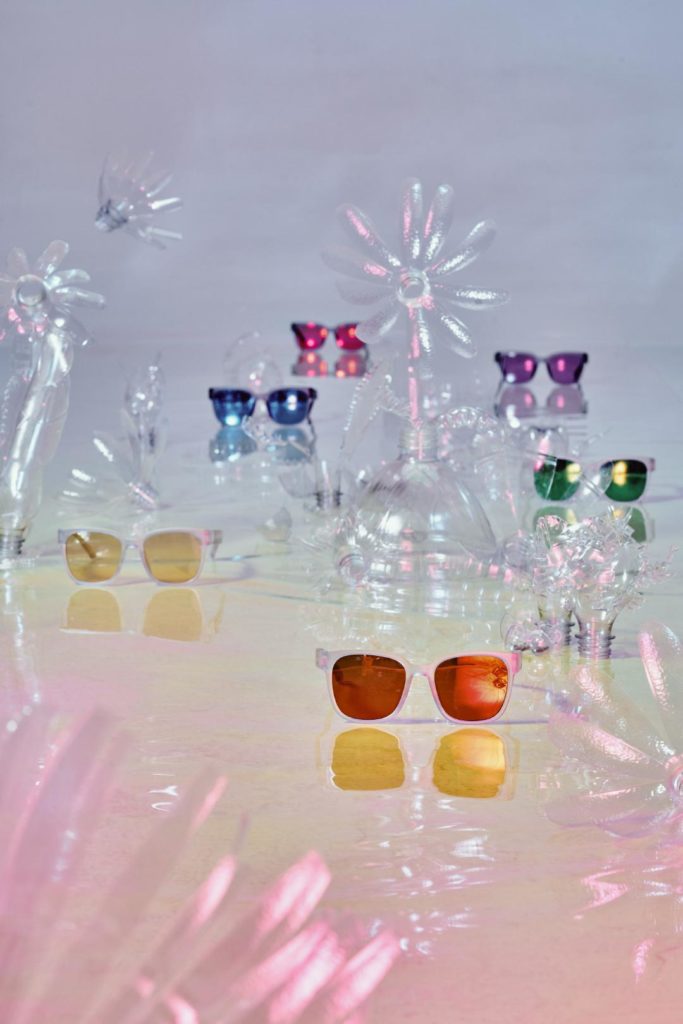 Coca-Cola and glasses brand Bolon got ahead of the game, launching their campaign ahead of Pride Month on 17 May for International Day Against Homophobia, Transphobia and Biphobia (IDAHOTB). Not only was their range of colourful glasses sustainably crafted out of recycled Coca-Cola bottles, but they were also limited-edition.

In a lucky draw, Coca-Cola distributed free pairs to a select 517 people who had shared ‘rainbow stories’ (related to Pride or other rainbow experiences) on Weibo. The number 517 was chosen to increase awareness about IDAHOTB, i.e., 17 May or 05.17.

Coca-Cola didn’t just highlight relationships within the LGBTQ+ community, it also celebrated all kinds of love with posters of rainbow glass-wearers embracing partners, friends and pets. Coca-Cola aimed to inspire a conversation about diversity and inclusivity with the slogan “Don’t be afraid of difference, see the rainbow” (不怕不同，看见彩虹), which attracted over 17 million views on Weibo. 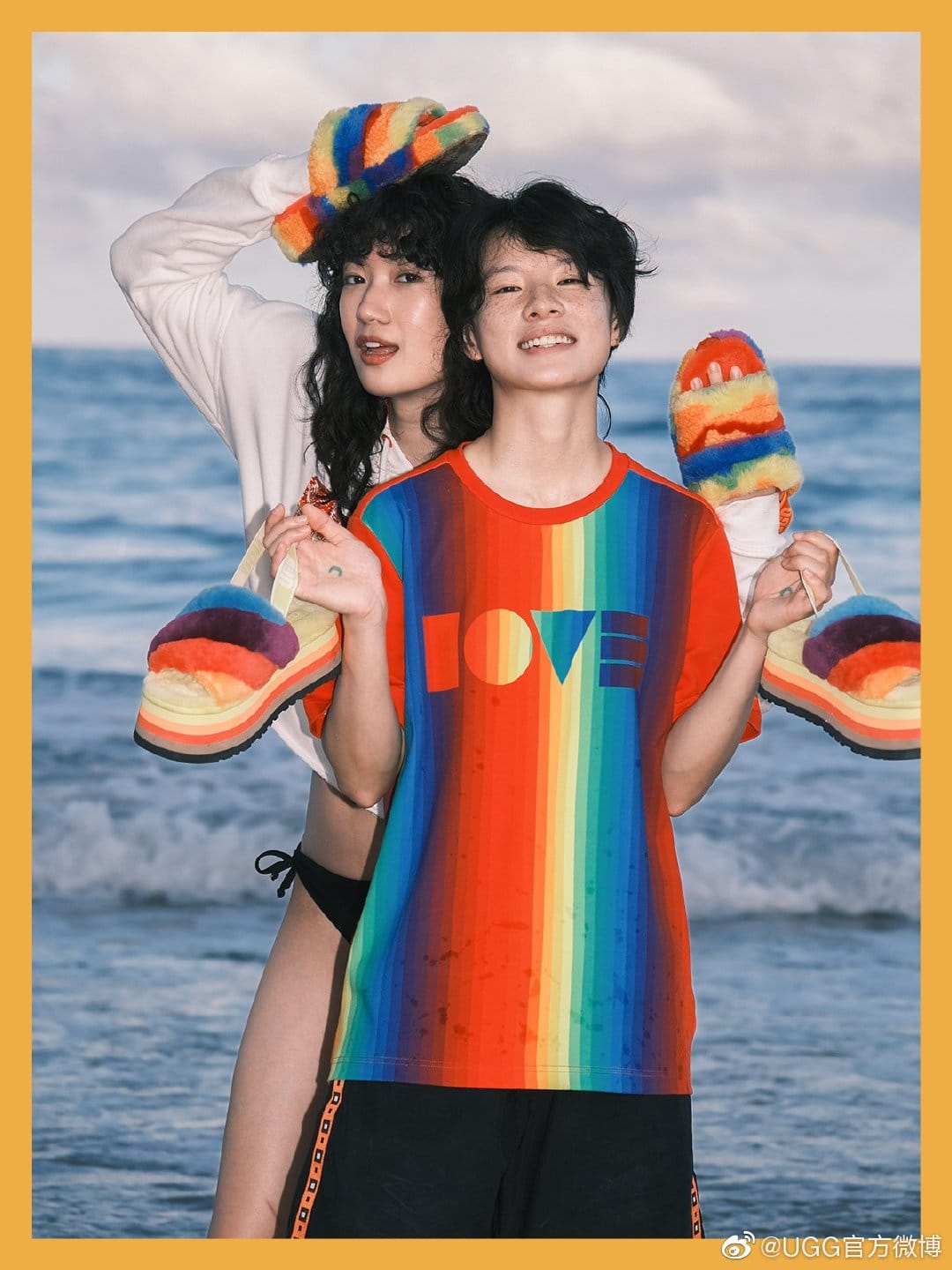 UGG was another brand that chose to promote its Pride campaign ahead of June. Launching on 20 May, also known as the love-themed festival 520, UGG followed many other 520 campaigns in choosing to focus on all kinds of love, rather than promotions solely depicting same-sex couples.

The brand described its global gender-neutral collection as “a celebration of self-identity and love” and told consumers to “be brave and proud to show your love” in its advertising slogan. While the campaign was global in nature, UGG localised with social media endorsements from Jiang Sida, a famous gay celebrity, and two lesbian influencer couples. Working with LBGTQ+ influencers to celebrate their identity is a rare move for brands in China and a bold decision from UGG.

Although so far it’s been one of the most discussed Pride campaigns in China, the hashtag #UGGPRIDE has received a mere 1.02 million views (by contrast, popular campaigns on Weibo can receive 50-100 million views). UGG worked with a select number of key opinion leaders and didn’t invest as heavily in Weibo advertising as many brands do, suggesting that it was just aiming to reach a targeted audience. 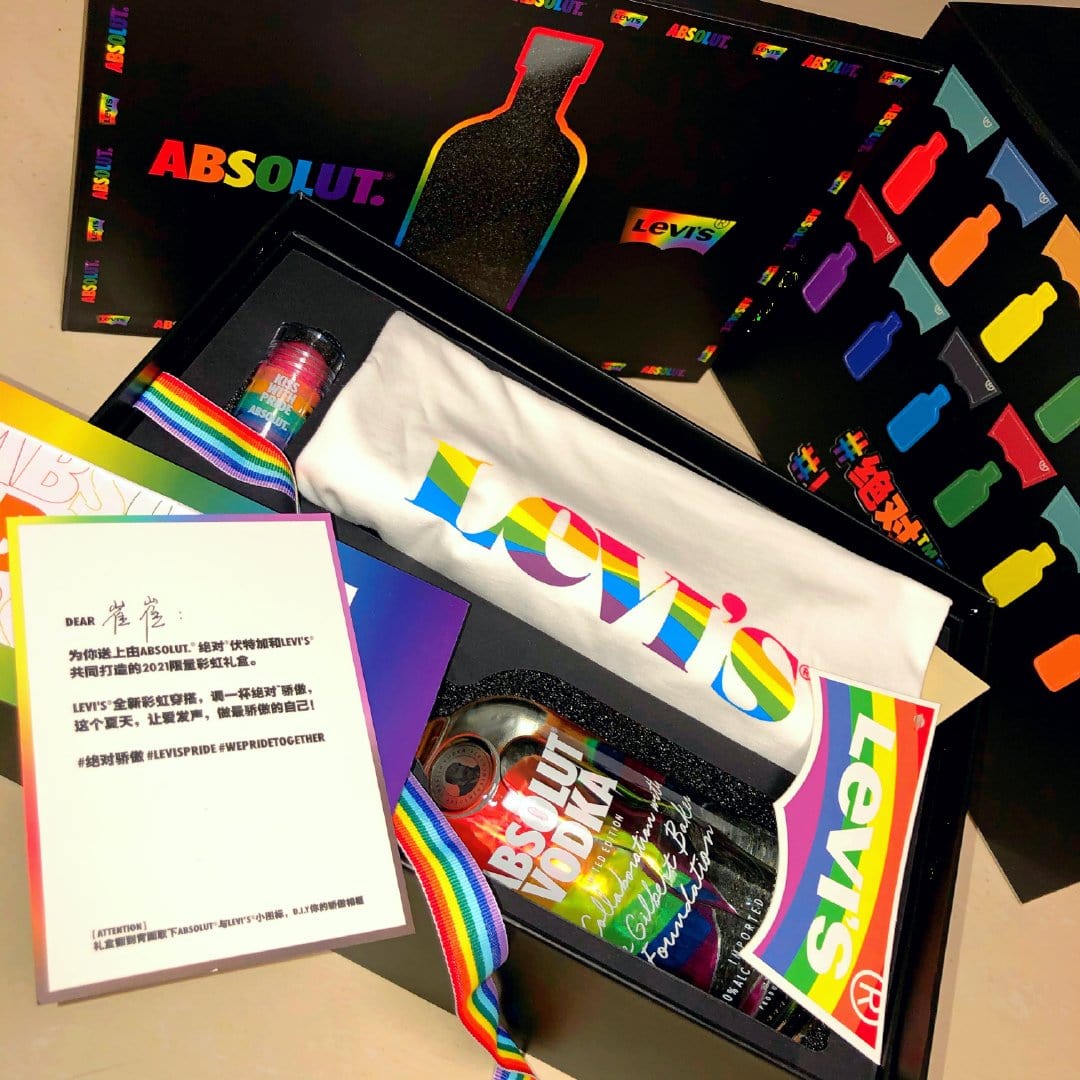 Levi’s third campaign for International Pride Month in China highlighted that love should not be distinguished by gender, race or skin colour. Since 2019, the hashtag #LevisPride has racked up an impressive 16.57 million views.

Rainbows are unsurprisingly the main focus of most Pride products. However, the famous denim brand mixed it up with a faded, retro design taking centre stage in their special collection. The brand’s inclusive rhetoric was highlighted in its denim jacket which featured the words: “They/Them, She/Her, He/Him, WE.”

Cross-industry collaborations are very popular in China, and what better headline-grabbing combination than vodka and jeans? Levi’s limited-edition gift boxes in partnership with Absolut gave consumers the chance to get their hands on both brands’ Pride products. 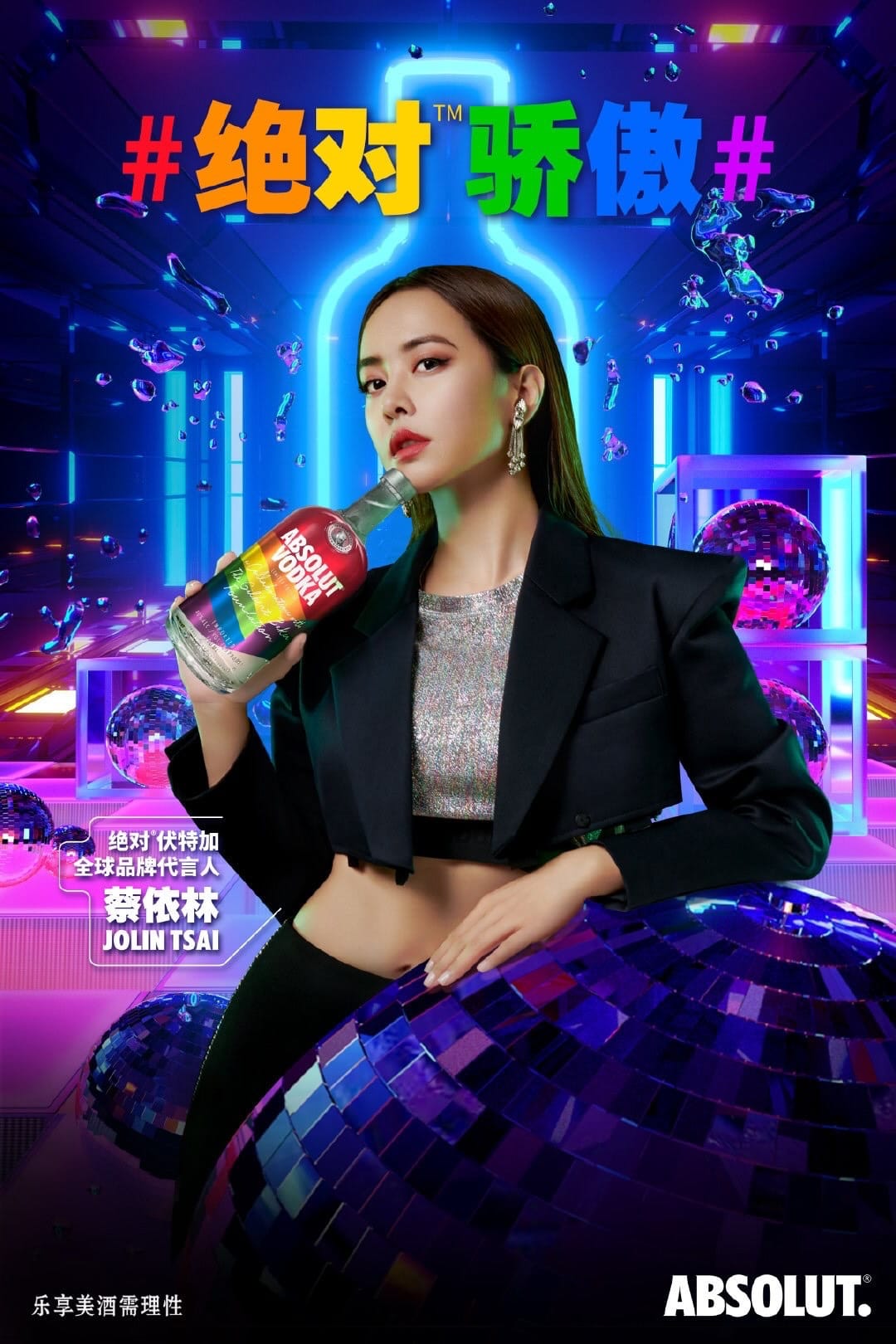 Absolut showed that you can’t have a party without vodka by sponsoring ShanghaiPRIDE’s RNBW party and highlighting its lively and inclusive brand ethos. Along with a ticket to the party, the brand’s rainbow vodka bottle and Pride-exclusive make-up were included in the gift box with a pair of Levi’s.

Vibrant posters featuring Taiwanese singer Jolin Tsai promoted the rainbow vodka under the hashtag #AbsolutPride. Tsai is an extremely popular singer in China but many of her Chinese fans are unaware that she has regularly spoken out about homophobia and is considered an important ally by many in the country’s LGBTQ+ community. She released the song 玫瑰少年 Womxnly in 2019, which expressed support for the LGBTQ+ community with lyrics such as “you don’t need to change yourself because of other people, you can be female or male.” Her values mean that she has been adopted as one of Absolut’s global brand spokespeople and has helped the company to attract a wider reach. 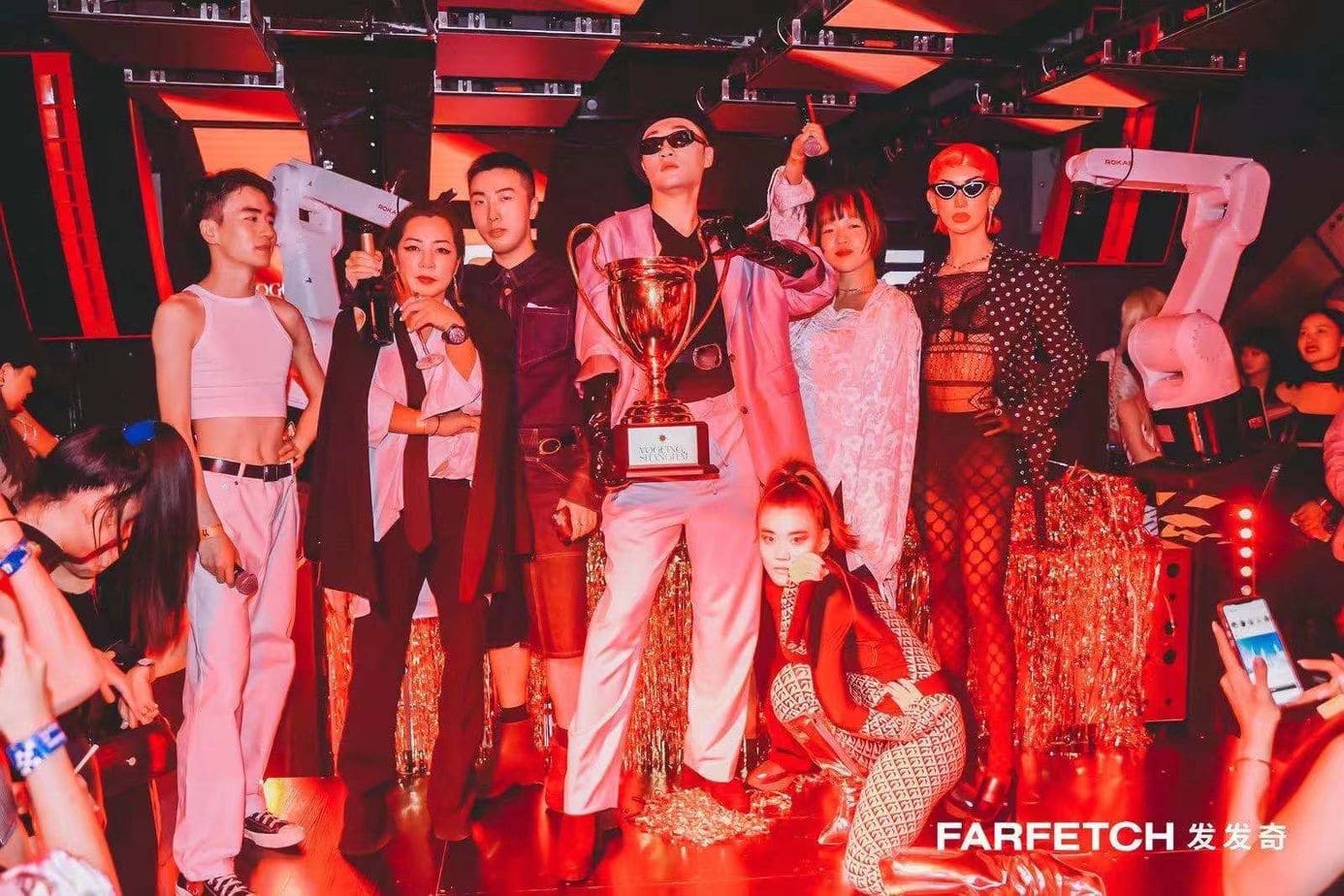 On 17 June, luxury e-commerce retailer Farfetch co-hosted a party with Voguing Shanghai, China’s first voguing and ballroom culture platform, which brought together members from across the LGBTQ+ community. Taking place in the one of the city’s most famous underground clubs, 44kw, the exclusive event was open to three lucky Weibo users who had entered a free ticket lottery. Voguers took to the stage in the packed club, while audience members had their phone in hand to share the event directly to social media.

Farfetch’s Pride campaign focussed on encouraging people to be themselves, a theme which shone through in interviews with male beauty creator 莲龙青 Kudos – who is known for his make-up tips and tutorials – and Voguing Shanghai founder 雪莲莲 Shirley Milan. Its mission is to empower the LGBTQ+ community to spread awareness through positivity and inclusivity.

The platform promoted Pride-themed products, such as a rainbow bag by Stella McCartney, which was shared on Weibo. Farfetch also celebrated Pride Month in its Shanghai, Beijing and Hong Kong offices, and held an open day for the LGBTQ+ community on 25 June in Shanghai.

Unsurprisingly, the key message conveyed in Pride campaigns was one of self-expression and celebrating all kinds of love. However, where several brands’ promotions varied from those in the West is that they chose to launch them ahead of Pride Month, incorporating different events into a single campaign.

The growing number of global businesses launching Pride campaigns in China is an encouraging step and shows an increased acceptance of a more inclusive society among certain consumer groups, especially young urban dwellers. Nonetheless, Pride campaigns have received low engagement on Weibo and other social media channels, suggesting that the movement still has a long way to go in terms of widespread support.

What do a bionic arm and a feminine hygiene product have in common?