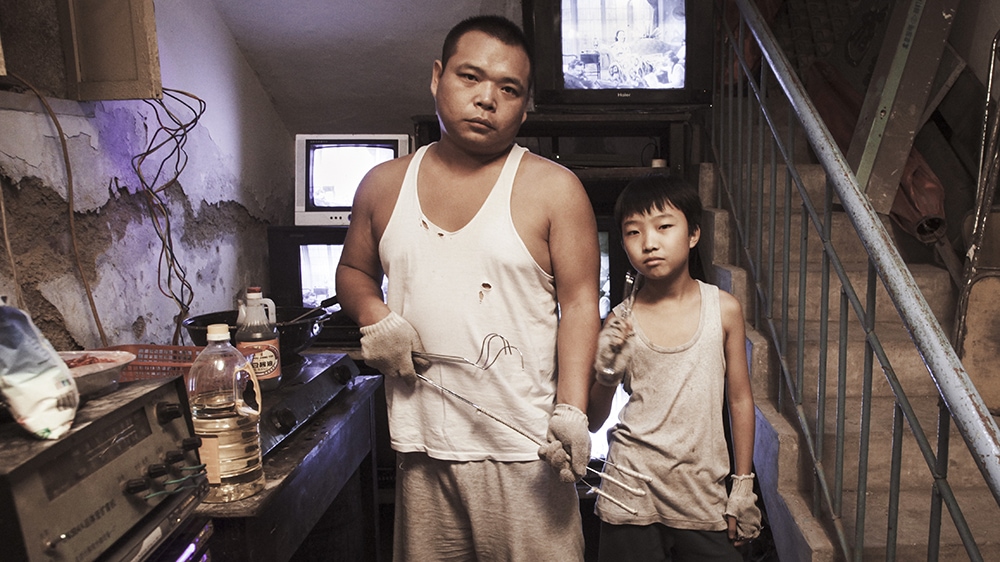 A far cry from the high-rise, glass and steel structures that dominate the capital today, 1990’s Beijing was a dusty city full of low-rise hutong buildings. Street-food sellers hawked their snacks on street corners and entrepreneurial ‘businessmen’ would sell pirated VCDs (a precursor to DVDs) of the latest Hollywood blockbusters.

Writer and director Sam Voutas’ new film King of Peking captures this early ‘90s Beijing period with great humour. Focused on the story of Mr Wang (played by Jun Zhao) and his son, we see them evolve from projecting movies in village squares to bootlegging films in a cinema.

A chance discovery of an early VCD machine leads Wang to become the first seller of pirate movies in the capital and makes him the King of Peking. The money raised from selling the VCDs allows Wang to pay his child support, which enables the pair to remain living – and working – together. But as time goes by and Wang dedicates more of his attention to pirating rather than parenting, his son begins to rebel.

The movie is a fantastic Chinese comedy that transcends international boundaries with humour that tugs at the heartstrings. For a Chinese audience – or anyone living in China in the early 90s – it also provides a heavy dose of nostalgia.

Australian Voutas (who now lives in Los Angeles) grew up in Beijing during the ‘80s and ‘90s and has captured the era with great affection. This period hasn’t often been the subject of non-Chinese filmmakers but is an important moment in China’s history. Divorce rates were on the increase as the children of one-child families grew up. Western culture started to seep in through movies and music, and entrepreneurial locals were looking at ways to get rich quick. All of these social changes are beautifully and sensitively addressed in the film, whilst the sets, props and visuals from the period brought tears to the eyes of the Chinese audience that saw it at the recent premiere in London.

Voutas’ first film Red Light Revolution (about a man who seeks his fortune selling sex toys) was pirated and on sale in the backstreets of Beijing within days of its cinematic release. Being a true Beijinger at heart, Voutas embraced the idea that imitation is the greatest form of flattery, and so used it as the base of his next movie. As they say, you can take the boy out of Beijing but you can’t take Beijing out of the boy. Sam Voutas directing a scene from the film King of Peking

What inspired you to write this story?

Being bootlegged! It was surreal to find copies of my last film in Beijing, about a week after we released in the UK. And when I picked the movie up off the shelf in Beijing’s Sanlitun district I really just expected the knock-off version to be a carbon copy, but I was surprised that the DVD actually had original artwork, made-up movie credits, and the like. So that got me going thinking about underground bootleggers back in the day, working in basements in Beijing, a family of pirates loving movies and seeing themselves as movie producers.

The film is set in ‘90s Beijing. How hard was it to find locations in the much transformed modern-day city?

Virtually impossible. In the end, we had to shoot the entire film on the outskirts of Beijing, in towns and cities in Hebei province. The demolition of older buildings hadn’t been as severe out there, so the team was still able to find locations like cinemas from the 1960s and the like. It’s also where we found our ancient beat-up three-wheeler car. Obviously it’s not quite Beijing as it was back then, but it is as close to it as we could find.

You grew up in ‘80s / ‘90s Beijing. Were you consciously trying to historically document this period in China’s history?

Myself, the art department, cinematographer, as well as the colouring house, we were really trying to make King of Peking feel like a film that was made in China in the 1990s. So not just a film that’s historically accurate to that time, but more something that feels like a Chinese movie from that era. Having the input of the guys in the colouring house in Caochangdi was pivotal, they knew more about how movies were coloured in those days than I could ever know. They helped steer us in the right direction.

Do you think it is important for non-Chinese filmmakers to make films about China?

I think it’s really important for filmmakers to make films wherever, not just about China but anywhere that interests them. Make a story set on the moon if it is something you want to do. It’s really essential we have Ang Lee making Brokeback Mountain for example. Or Werner Herzog making movies in South America or wherever his imagination and inspiration takes him. Did Homer spend much time in Troy? I doubt it, but he was passionate enough in the material to want to spend years of his life writing about it. Each storyteller brings their own unique take to the material, and no two ways one story is told are the same. I feel storytelling, when you get down to it at its simplest level, is a bunch of people sitting around a campfire, passing stories from one person to another. We should encourage people to tell stories, wherever they are. If people don’t like the story, that’s fine, but telling stories is essential.

How will the film be distributed and where can people see the film?

We’re busy working on that now and should have some exciting news shortly. I’m really looking forward to bringing the film to audiences in 2018, and hopefully not just at film festivals or on bootleg DVD store shelves in Sanlitun.