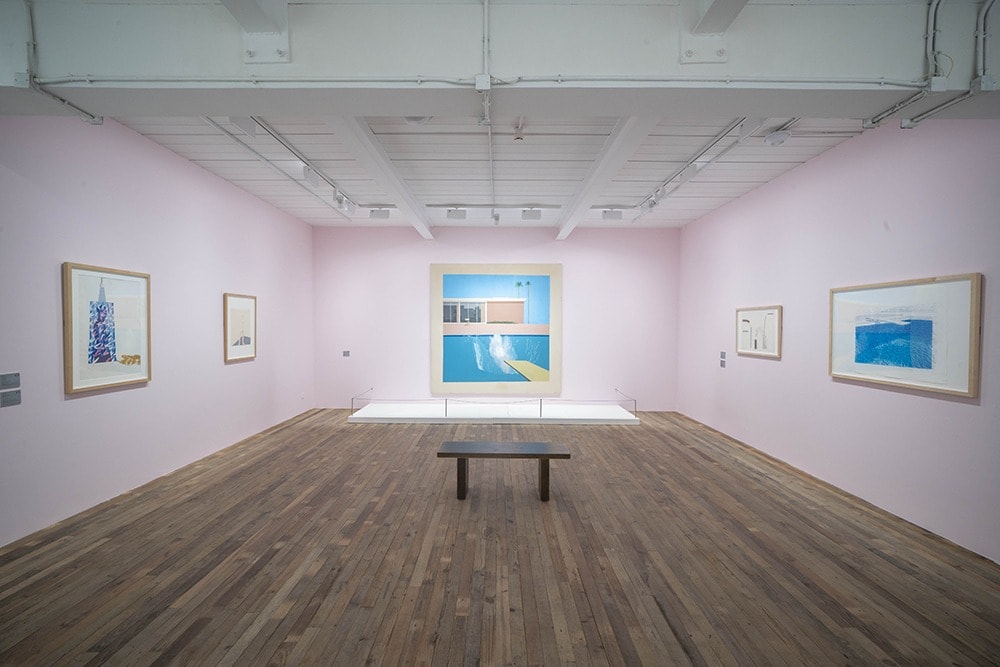 One of Britain’s most popular and celebrated artists David Hockney will be exhibiting a first survey exhibition in China in partnership with the Tate Museum, at M Woods gallery in downtown Beijing until January 2020. David Hockney: Works from the Tate Collection will be the launch exhibit at M Woods – Hutong, the second branch of the popular gallery in Beijing.

Drawing on many different sources, including popular imagery and the works of old and modern masters, Hockney’s subject matter concerns the traditional themes of art – still life, portraiture and landscape – and his principle obsession with representation and perspective. With nearly 100 works, the exhibition spans his career from the mid-1950s to the present and demonstrates the range of possibilities in his work, not only within the traditional areas of painting, printmaking and drawing but also in his more recent use of photography and digital technologies. Works are drawn primarily from the Tate’s collection in the UK and include some of Hockney’s most iconic paintings including A Bigger Splash (1967), Mr. and Mrs. Clark and Percy (1970-71), and My Parents (1977).

Born in Bradford, UK in 1937, Hockney attended Bradford School of Art and the Royal College of Art, London, before going on to make some of the best-known images of the last 60 years. Since his first retrospective exhibition at London’s Whitechapel Art Gallery in 1970 when he was only 33, Hockney has continued to attract widespread critical and public attention. He has been consistently innovative and adventurous in questioning how we see and respond to the world.

Hockney first visited China in 1981 with Stephen Spender, a British poet, and the two collaborated on the book China Diary (1982) that chronicled their journey. Hockney went on to explore his fascination with traditional Chinese scroll painting in the 1987 film A Day on the Grand Canal with the Emperor of China or: Surface Is Illusion But So Is Depth. In the film, Hockney examines the Qing dynasty court painting The Kangxi Emperor’s Southern Inspection Tour. Painted by a group of artists led by the master Wang Hui, Hockney guides viewers through the vastness and subtlety of the scroll and its dynamic lessons in time and space. The exhibition reveals how Chinese painting has continued to have a profound influence on Hockney’s practice in terms of painting theory, technique and perspective. Presenting the rarely shown The Kangxi Emperor’s Southern Inspection Tour (Scroll 6) alongside Hockney’s ‘Moving Focus’ series of prints as well more recent works in paintings and photography, the exhibition follows Hockney’s remarkable journey through the myriad ways he has interrogated the nature of looking and representation, from his days as a promising student to his place as one of the finest artists working today.

This is not the first time the Tate has exhibited in China. In 2018, Tate worked in partnership with Shanghai Museum and the National Art Museum of China, Beijing, on the staging of British Landscapes: Masterpieces from Tate Britain which went on to become the most visited exhibition in Tate’s history anywhere in the world. It received more than 614,000 visitors during its run in Shanghai, and in Beijing, the exhibition received more than 3,650 visitors each day. It introduced audiences in China to the important collections of art held by UK museums and galleries and was a platform for Tate to significantly increase its profile within a key region. The exhibition presented the best of British art to this international audience and showcased the UK’s continued position as a leader in the arts and cultural sector.

The presentation of David Hockney: Works from the Tate Collection is a collaboration between Tate and M Woods and runs until 5 January 2020.