A one-day project between the University of Salford’s fashion department and Zhejiang Fashion Institute of Technology succinctly demonstrates the value of years of cross-cultural exchange and training, writes Tom Pattinson

Back in 2011, the British Council established a campaign to pair up specialist technical colleges in China with British higher education institutions. Initially focusing on fashion design, the aim was to have both staff exchanges and shared student projects. Out of this, a partnership between the Zhejiang Fashion Institute of Technology (ZFIT) and the University of Salford was born.

Several visits from ZFIT staff were made to Salford, including one by Yuan Yong who spent 12 months studying Salford’s approaches to working and research methodologies before returning to ZFIT where he now holds the position of Director of International Exchange and Foreign Cooperation.

Initially, joint academic projects were hampered as ZFIT students mostly came from backgrounds of relatively low academic attainment and low income. However, with staff support and the sharing of documents that explained Salford’s Fashion Design programme, the quality of student work vastly improved over the following years. 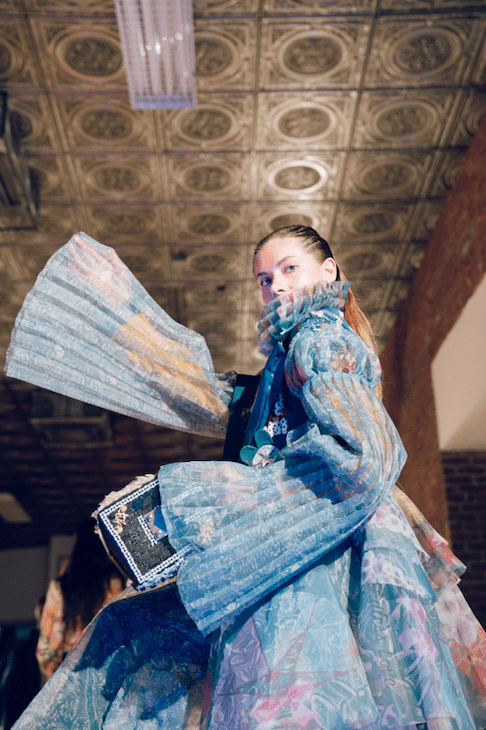 Fashion designs by Carline Zhou of the Sino-UK student project

At the same time, the formal academic relationship has evolved, meaning that there is now a joint programme, with three pathways in Fashion Design, Communication and Management, that has been approved by China’s Ministry of Education.

With this growth in the course’s stature, it has gained support from the local fashion and textile manufacturing industry. By 2016, this had led to placements for Salford student and job opportunities for Salford graduates.

Of course, the financial benefits of a guaranteed intake of Chinese students who attend their final year at Salford is clear, but the benefits are far more than the economic. The opportunity for students to experience the fashion industry in China is excellent from a marketing point of view.

“Many of our students have never been outside UK or even the north west of England and now we take them to Ningbo,” explains Professor Allan Walker, Dean of School of Arts and Media at the university. 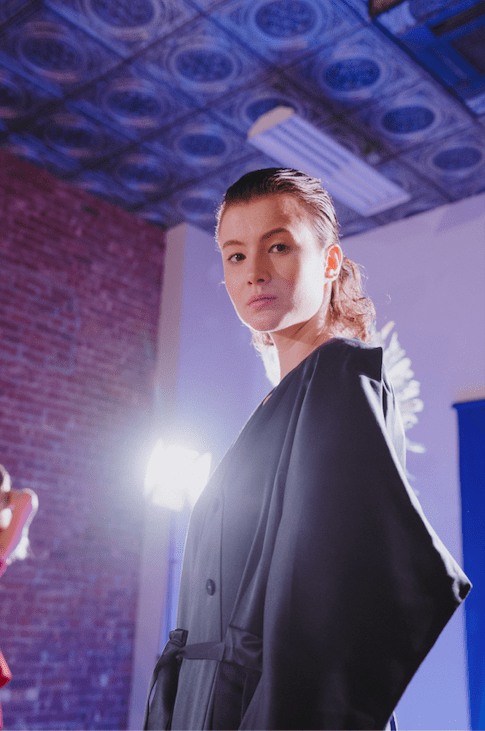 “All final year undergrads go to Ningbo and buy materials out there for their final show. We used to go to Paris but it’s more cost effective for students to go to China. The industry is incredibly welcoming and generous to our students. For many, it’s the most amazing experience they’ve ever had,” says Walker.

The reputational value of Salford’s positive relationship with China and exposure at events such as Beijing fashion week has attracted the attention of students from across China. And importantly, the experiences of the hundreds of students and staff who have worked between the two countries since the project really took off in 2014 have been transformational. Many students from Salford return to China to undertake work placements, internships and full time jobs in China’s fashion industry thanks to the relationships, network and confidence they gained from their time in the country as part of their degree.

“The companies employ our students – some long term. Some have been out there for two, three, four years,” says Walker. “Ningbo is a major centre for fashion manufacturing – there a lot of designing and manufacturing for the big stores in China is undertaken there so students can establish links with some very big companies indeed.”

ZFIT have benefited greatly from the partnership too. The unique selling point of having a relationship with one of the UK’s best fashion departments helps bring in more students, allowing for increased tuition fees and further government support. The use of Salford’s materials has also increased the academic quality of the university, and by implication its reputation and internationalisation.

As part of this mutually beneficial relationship, In December last year, the University of Salford and ZFIT held their first joint one-day project in Ningbo that saw 37 students from Salford and approximately 185 ZFIT students work together on a project called Colour Technik.

“The nature of the project was that it encouraged people to collaborate – to give them confidence and to learn to work with each other,” says Walker. “It put the students under significant pressure, giving them a taste of the deadlines and rushes that they would experience in industry itself. The collaborative nature is really emphasised in that it involves all the skills – it covers designers, stylists, make-up artists, models, even choreography and event management.”

Internationalism at its best, the Colour Technik programme was a success and plans are already afoot for a 2019 re-run. But the collaborations don’t end there. In February of this year, the University of Salford went to New York Fashion Week where students and graduates exhibited their works, whilst 25 students hosted a popup with ZFIT students and graduates, showing that collaboration between the two nations can spread even into third nations. With even more projects on the horizon this partnership looks like it is only going from strength to strength.

Ocean University of China and Heriot-Watt...

Educating for the Future

How Britain can benefit from China’s...