New figures from the Office for National Statistics show that, since the second quarter of 2020, the UK has imported more goods from China than from any other country

For the first time since modern records began, China has outstripped Germany to become the UK’s largest single import market. According to a report from the Office for National Statistics published in late May 2021, goods imported from China reached £16.9 billion in the first quarter of 2021, up 66% from the start of 2018. Imports from Germany fell to £12.5 billion during the same period. 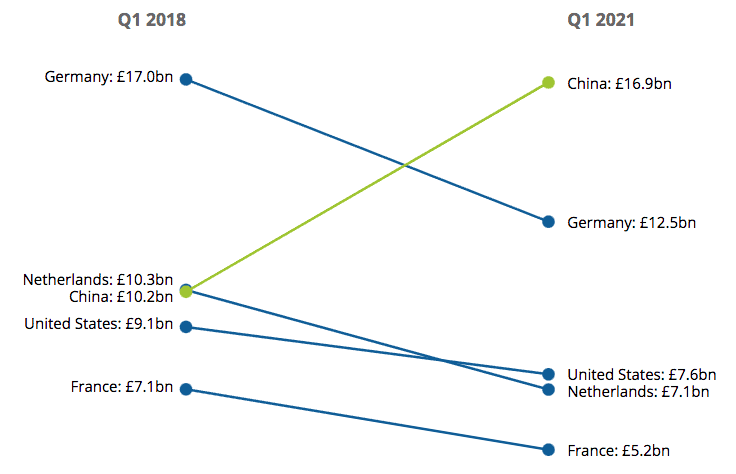 China is the only one of the UK’s top five import partners (Germany, China, France, the Netherlands and the US) from which imports grew between Q1 2018 and Q1 2021. Although part of a long-term trend, the recent rise in imports from China can be attributed to the increased demand for textiles for PPE and electronic devices as a result of the Covid-19 pandemic. While the UK’s other trade partners suffered severe disruption from the virus, China became the first major economy to recover from the pandemic, recording 18.3% growth in the first quarter of 2021.

As trade with China has increased, the combined impact of the uncertainty surrounding Brexit, plus the pandemic, have caused a decline in imports from Germany since early 2019. A decrease in imports of cars and car parts, which fell by 47.7% between December 2020 and January 2021, drove the recent drop in imports from Germany, caused in part by the closure of car showrooms during the UK national lockdown.

Although UK trade with the EU dropped by 23.1% at the start of 2021 compared to the same period in 2018 (trade with non-EU countries dropped just 0.8%), the EU remains the UK’s largest trading partner.