Share
The Chinese Communist Party leadership released a communiqué last week containing guidelines for the country’s next economic five-year plan and overall economic policy until 2035. An English summary can be read here

The document was made public following the end of the four-day 5th Plenum of the CCP’s Central Committee. The committee will decide upon the final content of the 14th Five-Year Plan ahead of the annual session of the National People’s Congress due next spring, at which the final document will be adopted.

The communiqué contained few surprises and is consistent with recent initiatives to shift China’s economic aspirations towards quality over quantity. Despite the current focus on the development of China’s domestic markets, the leadership also seems keen to stress it will continue to open up the country to foreign businesses.

From economic to social growth

Unlike the final plan, the communiqué includes few specific targets. It states, however, that Chinese leaders expect the country’s economy to reach the RMB 100 trillion GDP mark (£11.5 trillion) by the end of this year – a rather modest target given that it would imply an annual growth of less than 1% in 2020. 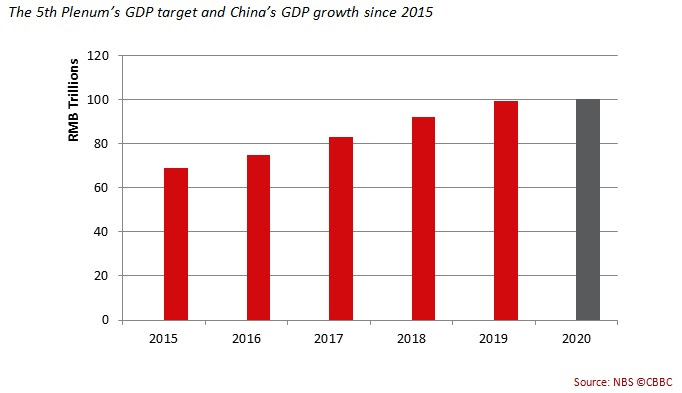 Behind the modesty, however, lies a general shift in policy direction away from pursuing unbridled growth towards fostering more socially and environmentally sustainable development. For example, the communiqué highlights the expansion of China’s social welfare net – the largest in the world, with 1.3 billion Chinese covered by basic medical insurance and nearly one billion people covered by a basic pension scheme.

Besides these figures, the communiqué is largely aspirational, listing 12 key areas in which substantial progress should be made by the end of 2025:

Looking further into the future, the communiqué states that by 2035, China wants to have attained the economic level of a ‘moderately developed economy’ and to have considerably expanded its middle class. Furthermore, it states that significant breakthroughs should be achieved in all crucial areas – especially in terms of technology and innovation.

Overall, the 14th Five-Year Plan (‘FYP’) follows the general principles of the previous FYP in shifting China’s focus away from high-quantity to high-quality growth.

Is it time for the UK to have a more sophisticated policy with China?

On the other hand, the communiqué also acknowledges the increasingly difficult global environment and growing pressure on China’s export industry and high-tech companies. As expected, it incorporates recent calls for greater ‘technological self-reliance’ and an emphasis on the so-called ‘dual circulation strategy’  – Beijing’s new initiative to emphasise the importance of China’s domestic market for future growth.

But China’s leadership also seems aware of the growing international concerns about its apparent shift towards being more inward-looking.

At a press conference on Friday 30th October, Wang Xiaohui, Deputy Minister of the Central Committee’s PR Department, emphasised the fact that a stronger focus on domestic consumption and technological development does not preclude more openness, and that Chinese leaders remain committed to improving business conditions and the legal environment for foreign businesses.