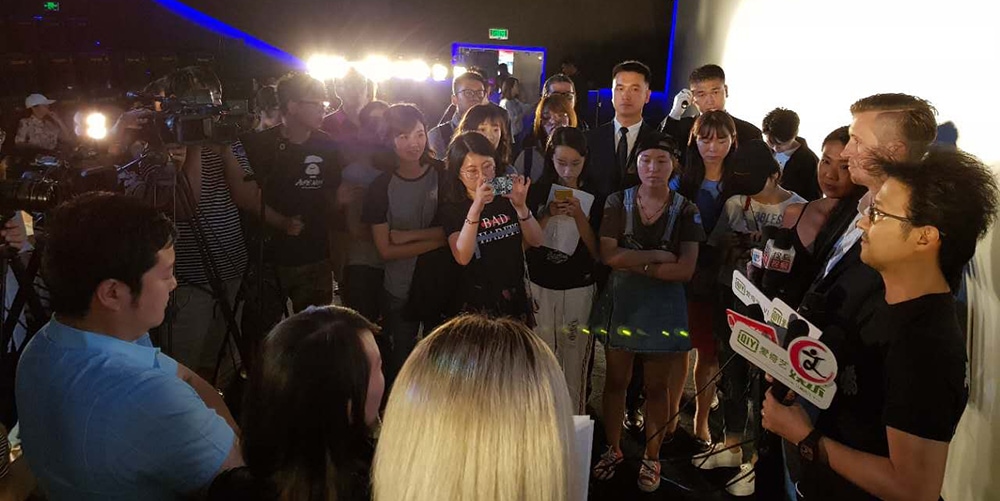 Wang Feng at the Beijing showing of the film Existence
Share

Rock star, composer and judge on Voice of China, Wang Feng stands on stage at the premiere of Existence – a feature-length documentary about China’s biggest rock star and his long and turbulent rise to fame. Standing beside this Chinese icons, struggling to see past the sea of microphones and cameras, are two blond-haired brothers from Britain.

Brothers Max and Tom Sanderson from Yorkshire directed and produced the film that broke records for a music documentary with over a million views in the first day of its launch. But for the British entrepreneurs, their road to success was long and winding.

Nine years ago Max and Tom would not have believed they would be sharing a stage with China’s biggest stars at the centre of a media frenzy. They arrived in the southern city of Shenzhen with little more than a bag of belongings. After a spell working in product design for a British company making flight cases, in 2009, the brothers decided to remain in China and start their own events and film company, SLA Studios in neighbouring Guangzhou.

The music industry was one they knew well. They had previously taken British musicians on a tour of Chinese underground music venues and had their fair share of ups and downs with local promoters, investors and backers. But it was through that first musical journey that they encountered the challenges – and opportunities – of running a business in China.

It needed to be international quality, Netflix quality and nothing less

It turns out music promotion was not for them but the videos they created around the tour piqued the interest of partners and investors, and before long they were filming all the major music festivals around China. They worked with established record labels, promoters and music technology companies and soon built a reputation as the go to team for live music videos.

The business model was very much created out of trial and error. Having a large full time team in Guangzhou, and with additional freelance teams in Beijing and Shanghai, meant that overheads were high, and staff turnover was even higher, as the often younger staff moved on to better paid roles after they had been through the rigorous training the British brothers provided. “We had to get low price people and train them up to be better,” explains Tom Sanderson. “The income we were getting was just going on salary and not going into our business or our pockets so we changed the business model.”

The team was stripped back, enabling SLA Studios to be more particular about their projects, commanding higher fees and outsourcing the rest. This freed up the team to work on more exciting projects and, in turn, led to the Wang Feng project.

“We were friends with the biggest distributors of music audio equipment in China,” says Sanderson. “He said they were doing an event in the Bird’s Nest Stadium in Beijing for Wang Feng and they wanted a documentary about the equipment used in the show.” 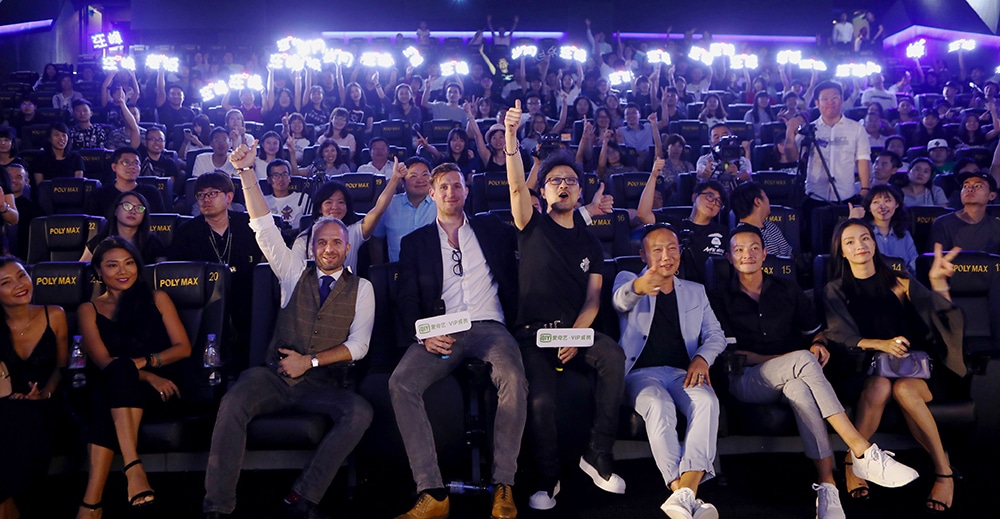 The SLA team with Wang Feng at the Premiere in Guangzhou

The brothers took on the project and when it was complete the audio equipment distributor passed the film on to the stage manager, who passed it on to Wang Feng. As Sanderson continues, “Within three hours of receiving that video Wang Feng called our customer, asked who had made it and said that he wanted us to do his next documentary.”

Max and Tom flew to Beijing to meet with Wang Feng who said that although he had worked with many film crews in the past, the SLA team had that certain X factor that he wanted. He commissioned them to create his next tour documentary. However, after a couple of concerts, Max the director, suggested to Wang Feng that they dig deeper into his personal story and Wang Feng gave SLA the creative freedom to take that direction.

What happened next went beyond even their own expectations as they documented every detail of Wang Feng’s life. The project took up nearly all of Max’s time during this period as he delved into the personal relationship between this musician who went against his parents’ wishes to become a rock star, the parents he defied and his now wife, the film star Zhang Ziyi, until finally, after three years, the project was ready for completion.

Within three hours of receiving that video Wang Feng called our customer, asked who had made it and said that he wanted us to do his next documentary

With the project in the can, SLA Studios reached out to Tom Simpson, Creative Industries sector lead at CBBC and Simpson suggested getting in touch with Onsight – a London based post-production house with over 20 years’ experience working with everyone from the BBC to Hollywood.

“I first met Onsight CEO, Simon Craddock, in Qingdao on his first trip to China,” says CBBC’s Tom Simpson. “Onsight later went on to become a Launchpad client with the CBBC and began developing links and contacts in China. At the same time, Tom and Max were shooting with Wang Feng and they got to the point where the project was nearing completion and they wanted to give it the added edge of BBC quality and so I introduced them to Simon.” 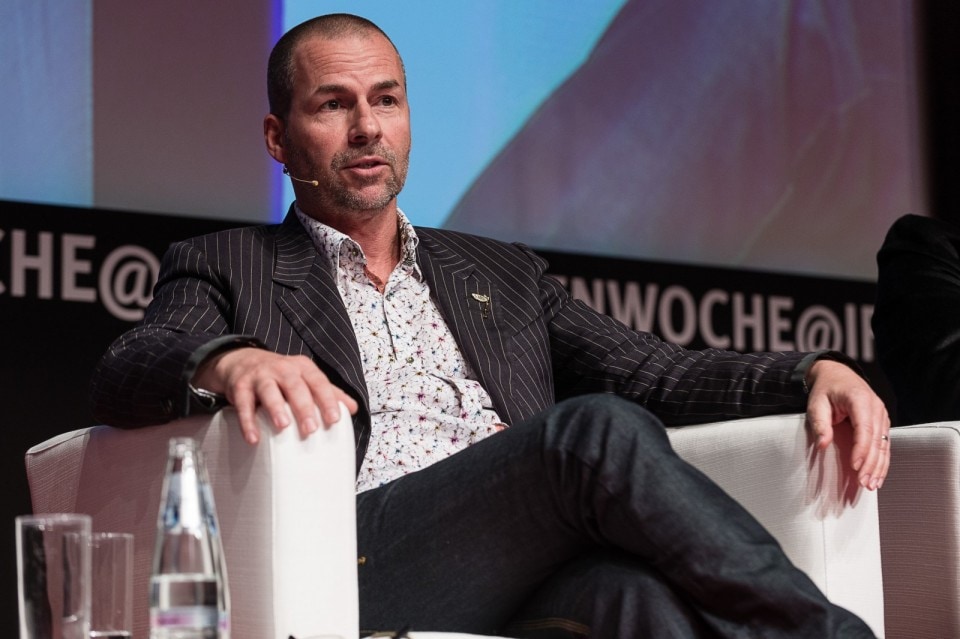 “We could have done the postproduction for thirty or forty percent cheaper in China and we would have had a load more money in our back pocket,” Sanderson says. “But we wanted to create ties with the UK. We want to do film work in China and connect on an international global level.”

Four years ago, Simon Craddock, CEO of Onsight, was invited by the then UKTI (now the DIT) on an innovators’ trip to Qingdao where China’s largest film studio complex was being built. Onsight is a leading pioneer when it comes to film technology and innovation and so Craddock was invited to investigate what a technology company like his could do in China.

However, although China is developing the hardware and buying the technology, the UK has developed the expertise in utilising it. “Anybody can buy equipment – it’s about understanding the technology and how to use it,” says Craddock. “And that is a skill that comes over a period of time with the right people. It’s not something you can buy instantly unless you buy our company and all the infrastructure that goes with it.” 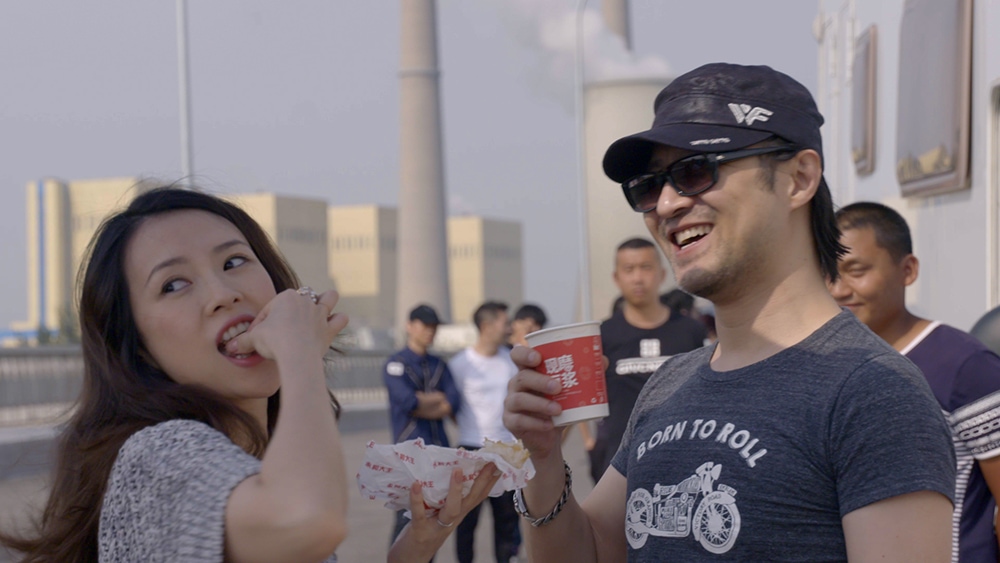 Zhang Ziyi and Wang Feng in the film Existence

Onsight’s entry into China in 2013 started off slowly. “There was a lot of interest and a lot of people engaging with us but not a lot of business that came out of it,” he says, explaining the situation by saying that this was down to the market being still relatively immature. However, over the last four or five years the market has grown and this year Onsight has received a flurry of work from China.

After a British director was appointed to work on a 4K opera from Chongqing, the producer sought out Onsight for postproduction. “The producer felt that what the west had to offer in terms of production values was different to China and she wanted to give it more of an international feel,” says Craddock. “The director then reached out to us because of our Chinese connections but also because central London post-production facilities are arguably the best in the world.” He continues, “We worked on ‘Earth: One Amazing Day’, which was the first production to utilize the UK-China film treaty and was produced by BBC Earth Films & The Shanghai Media Group”.

Then of course, the Wang Feng documentary came along. “The SLA boys absolutely understand the Chinese culture but they also saw that having western postproduction would add value.”

Craddock says that there were some questions about why the project should go to London to do the postproduction when the cost of doing it in China would be less. “Of course they have the technology to do it but would the film have looked the same?” asks Craddock. “Because when they came to the UK, a British film editor cut the film to give it more of an international feel. I think they were very pleased with the production and Wang Feng certainly was.”

The film was released via China’s largest video on-demand channel, iQiyi in August and has been viewed by over 2.5 million paid subscribers. The premier in Beijing was a major success and there are now plans to show the film internationally at festivals.

These two British companies, half a world apart, have played a major role in showcasing not only the best of China’s creative talent but the best of British too.