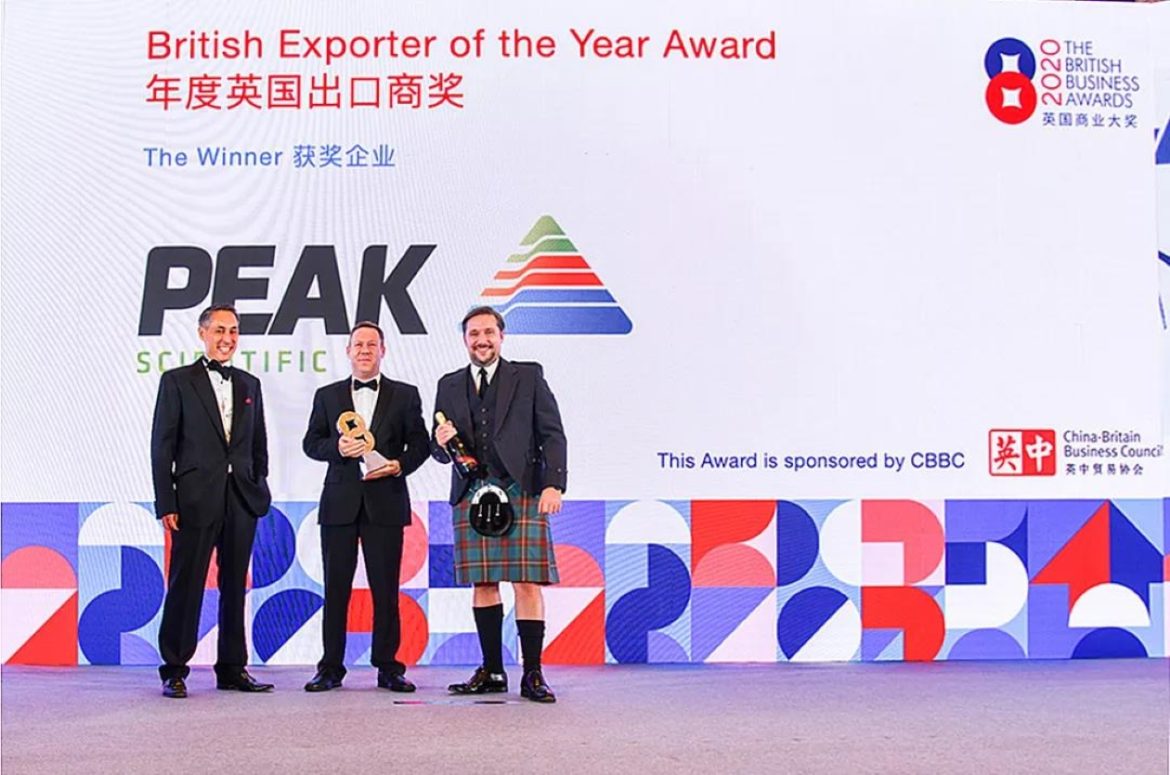 The winners of the British Business Awards 2020, including the inaugural British Exporter of the Year Award, have been announced

The new British Ambassador to China and patron of the British Business Awards 2020, Caroline Wilson CMG, was the guest of honor at the ceremony announcing the winners of this years Awards.

The ten awards aim to showcase the companies and individuals who have been building strong business relationships betwen the two countries. The biannual awards were first launched in 2009 and this year the British Exporter of the Year Award was created and sponsored by CBBC, to celebrate British success and innovation in exporting to China.

CBBC has developed this opportunity to recognise companies that have demonstrated sustained success in exporting to the China market for at least three years, and who have highlighted the positive impact trade with China can have on the UK economy.

Peak Scientific was established in 1997, specialising in the design and manufacture of laboratory gas generators. Peak’s gas generators are used in analytical testing, academic research laboratories, hospitals, food and beverage, QA/QC laboratories and many more. Peak Scientific’s products are smaller, safer, quieter and more efficient than similar products in the market and are real world alternatives to high pressure compressed gas cylinders –  a true example of British Innovation. The company’s products reduce the carbon footprint by bringing gas production in house on an ‘on tap’ basis. Transport of gas cylinders to sites is eliminated, where these cylinders are often transported long distances in inefficient vehicles.

“Growing British exports to China is a core focus for us here at CBBC so we jumped at the chance to get behind this year’s BBA with the launch of the new award category: British Exporter of the Year,” said Tom Simpson. “The response has been fantastic with a strong pool of nominations and five outstanding finalists. Congratulations to Chris and the team at Peak Scientific for winning the award and all of their work to grow their exports to China.”

Learn how to sell to China from your own site

“Peak Scientific are honoured to be named as Exporter of the Year in the 2020 British Business Awards, and we hope Peak Scientific are an inspiration to other businesses who have faced the same challenges during this difficult year,” said Christopher Harvey, General Manager, Peak Scientific. “China has certain unique characteristics that require consideration, but the same recipe of quality products, corporate values and our unique service model has served Peak and our customers well in both China and worldwide.”

The other finalists for the British Exporter of the Year Award included Avenue51, Renishaw, Samarkand Global, and TPP. These finalists are business leaders championing success and innovation in exporting to China across a number of different sectors.

Why British exports to China are booming

About the British Business Awards

Established in 2008, the biennial British Business Awards (BBA) are a national awards programme recognising and promoting excellence in innovation, enterprise, and endeavour, in the British and Chinese business communities.

Vikki can be reached on vikki.richardson@cbbc.org