The British film industry’s part in China’s post COVID-19 box-office recovery – and in particular The Eight Hundred – should not be overlooked, writes Dr Hiu Man Chan, founder and director of the UK-China Film Collab not-for-profit

The drama began in late January, when all of China’s Lunar New Year films were pulled and cinemas were ordered to close due to the outbreak of COVID-19. The Chinese New Year holiday is considered the most important period for the country’s annual box-office. By the end of February it was clear: a season anticipated to have the highest box-office on record suddenly turned into one of the lowest, with losses of £1.1 billion (CNY 10 billion).

Despite these difficulties, China’s cinema industry is now among the first to recover globally. After a long closure starting in late January (with a brief attempt at reopening in March for two weeks), cinemas were finally given the green light to return to business on July 20.

Up until October 3rd, the total box-office in China has reached £1.1 billion (CNY 10 billon). This is a significant milestone that no other territory has ever achieved. And although on the face of it such an achievement may seem irrelevant to film companies and professionals in the UK, I would like to emphasise just how much the British film industry has contributed to this success.

Of all the newly released films in 2020, The Eight Hundred is the most successful among them, sitting pretty at the top of the chart with £341 million (CNY 3 billion) in box office receipts to date. Directed by Guan Hu, The Eight Hundred is an epic war film about Japan’s invasion of Shanghai during WWII in 1937 and based on the (true) story of the defence of Sihang Warehouse.

Up until October 3rd, the total box-office in China has reached £1.1 billion (CNY 10 billon). This is a significant milestone that no other territory has ever achieved.

Being the first Chinese film to be shot entirely on IMAX cameras, The Eight Hundred can also be seen as another milestone in terms of quality. It is fair to say that the IMAX cinematic experience offered by The Eight Hundred is fairly close to those offered by Hollywood studios. Building on its controversy last year when the film was pulled from the Shanghai International Film Festival’s premier, local audiences had been looking forward to the film for over a year. Riding on the excitement of the reopening of cinemas, The Eight Hundred effortlessly overtook British war film 1917 which was released a week or so earlier, and Tenet, a week after. 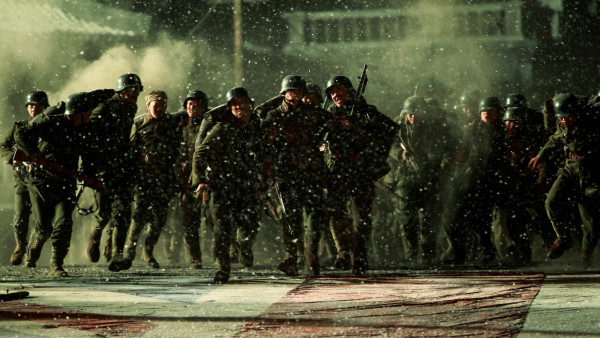 However, many may not realise that The Eight Hundred’s high-quality visual effects (VFX) has the British film industry to thank – in particular a company called DNEG. Founded in 1998 with headquarters in London, DNEG is one of the world’s leading visual effects and animation studios for feature film and television, with a record five Academy Awards. DNEG was jointly responsible for The Eight Hundred’s visual effects and demonstrates the talents and skills that the British film industry continues to offer to the international market, particularly in the thriving post-production sector.

Another significant British contributor toward The Eight Hundred was Rupert Gregson-Williams, who was jointly responsible for the film’s original soundtrack composition. The British composer’s well-known filmography includes Hotel Rwanda, Abominable, The Legend of Tarzan and many more.

These collaborations reveal how reliant the Chinese film industry is on the talents and skills of other territories in order to achieve great box-office success like that of The Eight Hundred. The British film industry and its talents have a lot to offer in the future, to the film market that is about to become – if not already – the most important in the world.

In short, all of these films and their takings contributed a great deal toward Chinese cinema’s recovery and supported the post-COVID-19 box-office to achieve the record £1.1 billion (CNY 10 billion) mentioned at the beginning of this article.

Unfortunately, these stories are not often told by local media on either side and I’d like to take the liberty of encouraging journalists and critics alike to acknowledge the vibrant traffic between the two countries’ film industries and to expect more from such collaborations in future.

Hasbro, Mattel and eOne Family explain how to license and protect your IP in China